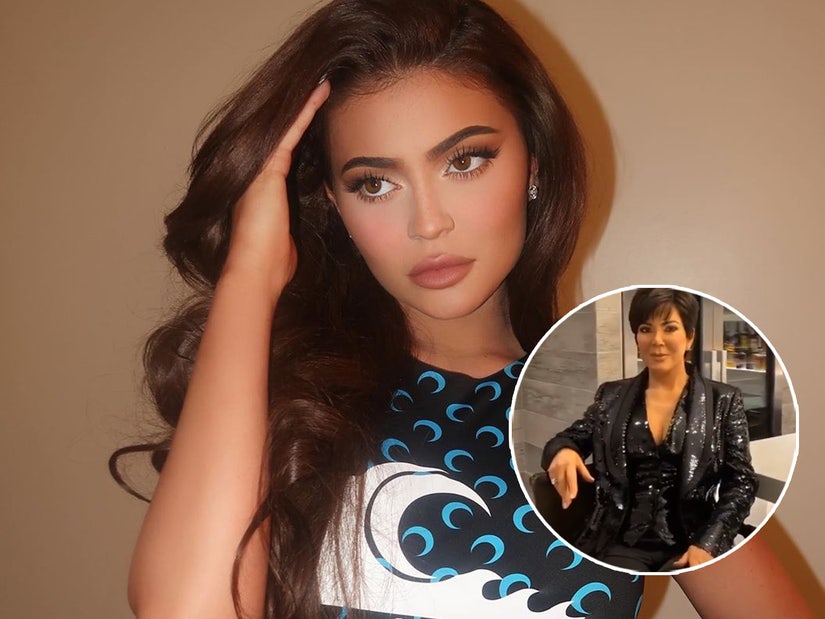 "She's mine now and I don't wanna get any texts or phone calls from my sisters after this."

Kylie Jenner has a new piece of home decor that may cause a rift between her sisters.

Taking to her Instagram on Tuesday, the youngest of the Kardashian clan revealed she is now the keeper of her mom's wax figure.

"Guess who came to live with me now -- Kris Jenner's wax figure," the 22-year-old makeup mogul said as she recorded the martriach's doppelganger posted up next to her bar.

"She's mine now and I don't wanna get any texts or phone calls from my sisters after this," Kylie continued, referring to Kourtney, Kim, Khloe and Kendall. "She's mine. Thanks, mom."

The world first learned of Kris' life-size wax statue after Kim posted an Instagram Story about it back in December 2019.

The big reveal happened during a dinner party hosted by the momager, 64, where her guests -- including Chrissy Teigen and John Legend -- took in Kris' doppelganger in all its glory.

"You guys have no idea how real this looks. It's insane," Kim said of the sculpture, which was commissioned by the Hollywood Wax Museum and sports Kris' "favorite" Dolce & Gabbana tuxedo.

Kim went on to say the the figure is incredibly detailed, down to the mother-of-six's "exact" hairline and small mark on her chin. "I can't even tell you how creepy and amazing this is," she exclaimed.

How amazing is this!? Our new wax figures at @nycwax #madametussaudsnewyork, opening Tuesday! Me, Kourtney, Kim, Kylie, Khloé and Kendall will all have our wax figures together for the first time. #DoubleTrouble #MadameTussauds @kourtneykardash @coreygamble pic.twitter.com/lHsFCxNjG8

Kris shared her own video as she filmed Kim seeing the wax figure for the first time, narrating the clip, "Kim is going upstairs to get me something and I just want to see what she's gonna think of the statue."

Startled, the makeup mogul exclaimed, "Oh my god, what is that?! That is so funny. Oh my god, this is so crazy and real."

"It's so you can visit with me and not have to listen to me talk to you," Kris quipped.

In May 2019, a very similar wax figure was unveiled at Madame Tussauds in New York City, alongside statues made in the likeness of her five daughters.

Kris took to Twitter to commemorate the event with photographs of the family sculptures and the caption, "How amazing is this!? Me, Kourtney, Kim, Kylie, Khloé and Kendall will all have our wax figures together for the first time."