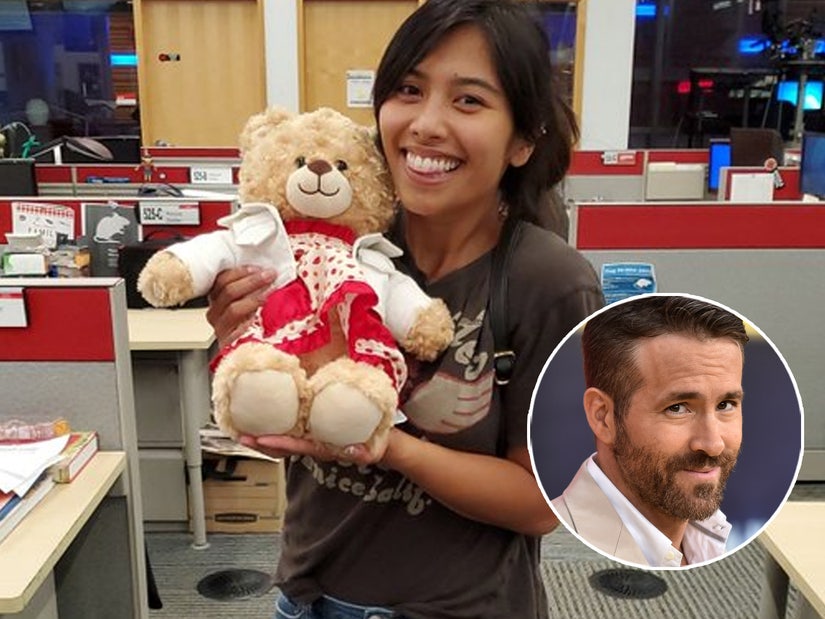 She thanked Ryan Reynolds for his role in the reunion.

"Break out the Aviation Gin," a celebratory Mara Soriano exclaimed on Tuesday night -- after a Good Samaritan returned a beloved possession less than a week after it was stolen out from under her.

The 28-year-old Vancouver resident went viral after a teddy bear containing a voice recording of her late mother was stolen along with a bag of other valuable belongings while she was in the middle of a move into a new building.

UPDATE: ACTUAL FOOTAGE OF THE THEFT! When I dropped the bag, my fiance was still in the alley, not inside, so it would have been right beside the uHaul cabin. This happened just after he pulled into the loading bay. pic.twitter.com/6eoGzVVr2t

After making a plea for the bear to be returned for sentimental reasons on social media, stars including Ryan Reynolds, Canadian VJ George Stroumboulopoulos, Dan Levy and Zach Braff all shared her story.

Both Reynolds and Stroumboulopoulos also pledged $5K each as a reward for its safe return.

If you #FindMarasBear, I’ll send you so much @AviationGin gin it’ll be affected by the tide.

Soriano's mother died in June 29 after a battle with cancer. The recording, according to an interview Mara did with CNN, was of her mother telling her that "she loved me, she was proud of me, and she'll always be with me." The bear was even styled to look like her late mom.

As the story generated headlines across the internet, Soriano got an e-mail on Tuesday night from someone saying they found the bear in a tent and hoped to return it to her. "This guy seemed like he just really wanted me to have the bear, and he seemed like he was in dire straits, and really wanted to turn his life around," she told Global News.

They met in a public space, where the man made good on his claims. "I couldn't see anything immediately, because my eyes just immediately welled up," she told the publication. "I snatched her out of his arms before he could even fully take her out of the handkerchief, and I just hugged her so tightly. I just couldn’t believe my eyes!"

Video and photos shared on social media showed Sirano reunited with the plush, whose voice box was still intact -- though missing her mom's signature glasses.

After being tagged in one of her posts, Reynolds reacted to the reunion on Twitter, writing, "In happier news... thank you everyone who searched high and low. To the person who took the bear, thanks for keeping it safe. Vancouver is awesome. #FoundMarasBear."

She reposted his tweet and expressed gratitude for his role in bringing more awareness to her search.

"THANK YOU RYAN," she wrote. "This wouldn't have been possible without your signal boost!"