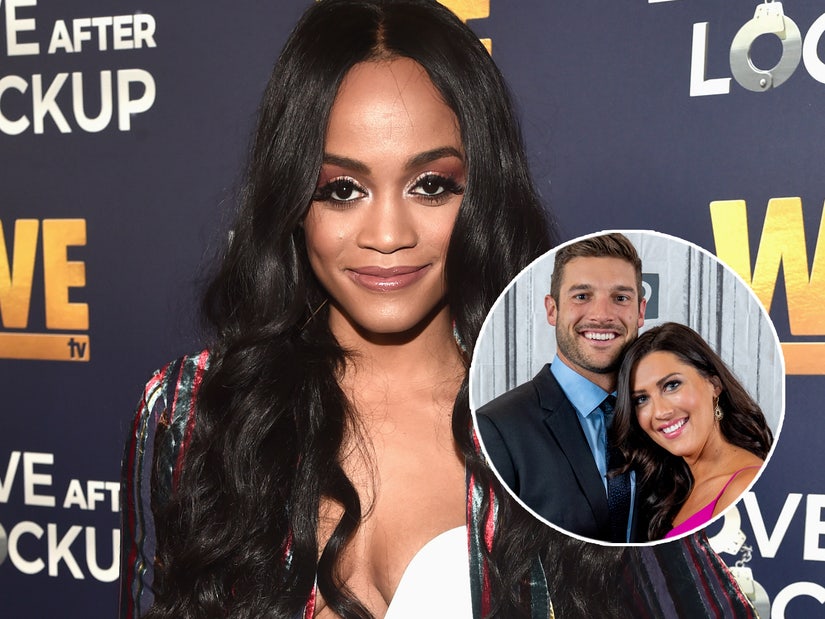 "He has doubled down on his beliefs. This isn't the first time he's had problematic behavior."

Rachel Lindsay feels a certain type of way about Becca Kufrin's fiance Garrett Yrigoyen and it's definitely not favorable.

During her guest stint on Wednesday's podcast "Everything Iconic with Danny Pellegrino," the former "The Bachelorette" star gave her opinion on Garrett, who has come under fire for liking offensive tweets in the past and posting support of police amid the Black Lives Matter movement.

"He has doubled down on his beliefs," she continued. "This isn't the first time he's had problematic behavior. When he was on the season, he had a history of 'liking' things that were racist, sexist, homophobic, calling the Parkland students child actors, it was a lot.'

Back in 2018, Garrett apologized for liking memes that ridiculed women, immigrants, the transgender community and the Parkland shooting survivors.

In June, however, Rachel took umbrage with Garrett's more recent behavior and spoke about it with Becca -- who got engaged to Garrett on "The Bachelorette" in 2018 -- during the "Bachelor Happy Hour" podcast.

"We had a podcast about diversity and what was going on in the country and her fiance posted a Blue Lives Matter picture," Rachel recalled on Wednesday. "And with his whole chest gave his long explanation as to why he felt that way."

"So I got on the podcast saying it was problematic -- what he meant to me. I was just like, 'I'm tired that everyone woke up in 2020 and realized that racism f--king exists.' It's been happening."

About a week after the "Bachelor Happy Hour" podcast, Becca announced she was not sure about her future with Garrett.

"For those who are curious about my relationship with Garrett at this point, all I can say right now is I don't know," Becca explained at the time.

When pressed about Becca and Garrett's status by Danny on Wednesday, Rachel said she would not comment "out of respect" for Becca.

TooFab has reached out to Garret and Becca for comment.