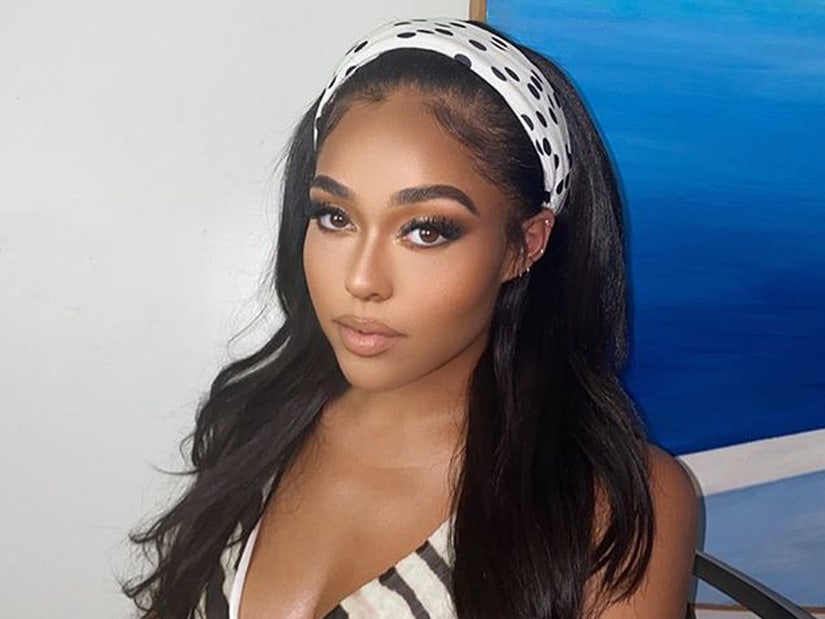 Many fans expressed their frustration that the influencer wasn't featured in Cardi and Megan the Stallion's "WAP" video instead of former bestie, Kylie.

Jordyn Woods sees you seeing her and she can't stop laughing. Apparently, when she went to bed the night after posting her booty massage video, she had no idea just how much it would take off.

"Woke up this morning and saw why I was trending on Twitter," she captioned a new post to her Instagram of her in a casual-yet-sexy orange jumpsuit. But it's what was hiding on the next page that was the real treat.

"Jordyn Woods thicker than gorilla exhibit glass," wrote the fan. And clearly Jordyn wasn't alone, as the moment she screen-captured the tweet it already had over 25,000 likes. Something about a man who knows how to paint a picture, right?

Jordyn Woods just bared it all -- and the Internet can't seem to get enough.

The 22-year-old model became a top Twitter trend on Saturday after she shared a video of herself getting a lymphatic drainage massage ... on her booty. Jordyn visited SKINIC, a clinic in Beverly Hills, on Friday -- the same day her former BFF's Kylie Jenner went viral for her surprise cameo in Cardi B and Megan Thee Stallion's "WAP" music video.

In the clip -- which was posted on SKINIC's Instagram Stories on Friday -- Jordyn can be seen lying naked on a table as a technician massages her thighs and derrière. Jordyn reshared the video on her Stories and thanked SKINIC for her lymphatic massage.

"This was everything," she wrote alongside the clip, adding a praying emoji. "Thank you @SKINIC"

Earlier on Friday, the former reality star shared a series of photos, including one of her at SKINIC. In the hot pic, a masked Jordyn can be seen showing off her behind as she took a selfie in the mirror.

"She compliment my swag She bad 💌" she captioned the post.

SKINIC also posted a photo of Jordyn with one of their clinicians.

"It's almost the weekend and to top off our Friday we had this sweet beauty today!" the caption read. "@jordynwoods thank you for trusting us, we can't wait to see you again! ⚡️"

"Lymphatic Drainage massage is a form of gentle massage that encourages the movement of lymph fluids around the body," the captioned continued. "The fluid in the lymphatic system helps remove waste and toxins from the bodily tissues. Weekend we are ready for you!"

However, it was Jordyn's massage video that had Twitter going wild. As the majority of the reactions to the clip included thirsty comments about Jordyn's physique, many fans expressed their frustration that the influencer wasn't featured in Cardi and Megan the Stallion's "WAP" video rather than her former bestie, Kylie.

If you need a refresher, Jordyn's friendship with Kylie and the Kardashians came to an end after Jordyn allegedly hooked up with Khloe Kardashian's then-boyfriend, Tristan Thompson, during Valentine's Day weekend 2019.

And fans made sure to mention that in their tweets.

"No need to wonder why Tristan Thompson was tryna get at Jordyn Woods," a user wrote alongside the clip.

"If you shaped like Jordyn Woods please let me pay this month's rent for you," a person tweeted, while another said, "i saw jordyn woods' ass today... it's been a good day."

"Jordyn Woods really a bad one Megan and Cardi should have really put her in that video instead of Kylie Jenner," a user said.

Check out more reactions in the tweets, below.

Jordyn Woods really a bad one 🔥
Megan and Cardi should have really put her in that video instead of Kylie Jenner. pic.twitter.com/TQqXCKqbSo

how many times i watched the jordyn woods video pic.twitter.com/J2t3tn5u7R

SO CARDI B & MEG CHOSE KYLIE JENNER FOR #WAP WHEN JORDYN WOODS LOOKS LIKE THIS????😱😳 pic.twitter.com/Rp1yZo89rA

Jordyn Woods 👀 I see why #tristanthompson risked it all 😂 pic.twitter.com/9Hr6z4TGBA

No need to wonder why Tristan Thompson was tryna get at Jordyn Woods pic.twitter.com/jkbNhJZh7J

Jordyn Woods, if you see this, yes, I do the cooking and I do the cleaning. I was taught to always have a warm bath running for my queen when she arrives home with a glass of fine Pinot noir by the tub and soft R&B playing in the background.