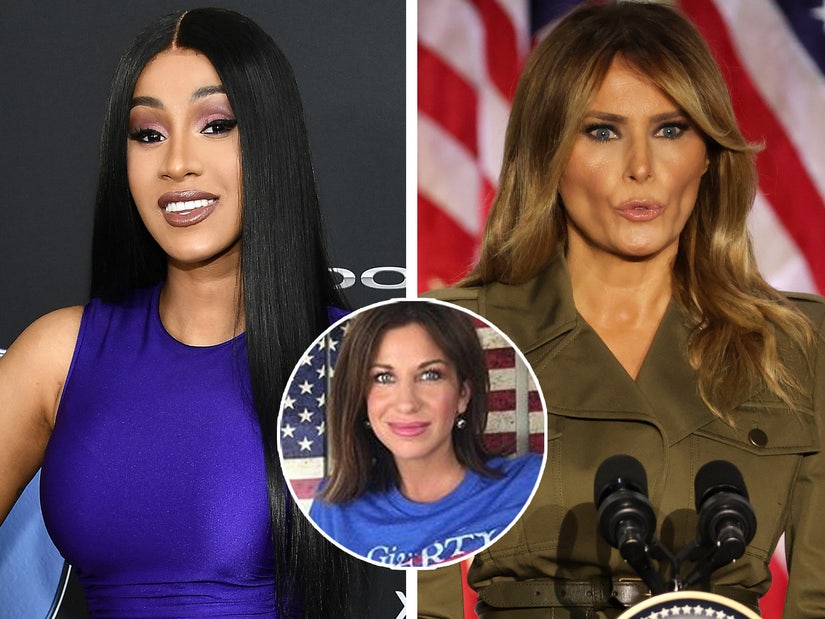 The rapper tweeted out one of the First Lady's nude photos in response.

Cardi B is never one to back down from critics -- and, this time, First Lady Melania Trump was brought into the drama.

Cardi has been coming for a lot of critics following the release of her and Megan Thee Stallion's "WAP" music video -- and this time was no different.

"Didn't she used to sell that Wap?" tweeted out the rapper. Replied Lorraine: "No, that's a total & complete lie. What's not a lie is that you are absolutely destroying America's youth with your lyrics and should be ashamed of yourself."

Melania previously filed a defamation suit against the Daily Mail after they ran a story investigating whether she was a sex worker before meeting Trump. She ended up receiving $2.9 million as part of a settlement and the publication issued a retraction. "We accept that these allegations about Mrs. Trump are not true and we retract and withdraw them," they said at the time. She settled a similar case with blogger Webster Tarpley.

Cardi followed up her first tweet with an old, nude photo of Melania and adding, "This pic giving me 'yea you f--kin wit some wet ass p---y' vibes ...just sayin."

The first tweet racked up 379K likes and 71k retweets, while her second post was liked over 140k times, with 30k retweets. One came from "The Real" cohost Loni Love, who wrote, "Society loves to label and compare women ... let'em know Cardi."

Lorraine's initial tweet didn't have quite the same traction, generating 55k likes and 13.6k retweets. She later doubled down on her Cardi criticism with the tweet below:

-drugged & robbed men during her time as a “stripper”.

-raps songs about her genitalia, corrupting our youth.

-her husband cheated on her and she told the youth of America that it’s okay to stay with a cheating man.

...and Joe Biden & Kamala Harris campaign with her!

Cardi has admitted to drugging and then robbing men while she was a stripper before finding fame.

"Whether or not they were poor choices at the time, I did what I had to do to survive," she said after her past started making headlines. "I made the choices that I did at the time because I had very limited options."

"I never claimed to be perfect or come from a perfect world," she added. "The men I spoke about in my [Instagram Live] were men that I dated that I was involve with men that were conscious willing and aware. I have a past that I can't change we all do."