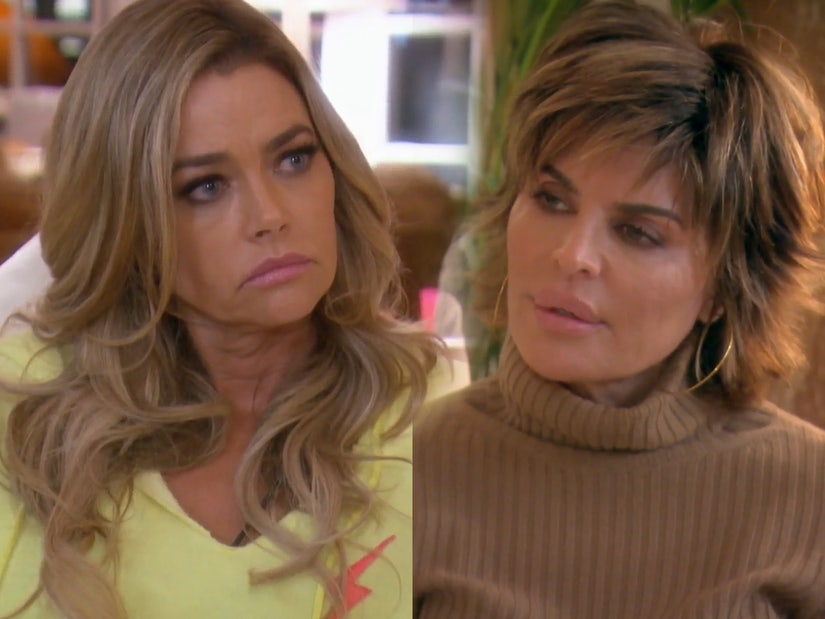 Richards also reveals what she told her daughters about the Brandi hookup -- and insinuates Glanville doctored their texts.

While most of the action in the "Real Housewives of Beverly Hills" season finale went down at a holiday party hosted by Dorit Kemsley, the main event of the hour happened a little later -- as Lisa Rinna confronted Denise Richards after the latter bailed on filming.

Despite the ongoing turmoil between her and her cast mates, Denise was planning to attend Dorit's party up until hours beforehand. Garcelle Beauvais even went to Denise's hotel to pick her up and waited there 45 minutes as her calls kept going straight to voicemail. Garcelle was livid she got ghosted, though the reasoning behind Denise's absence soon became very clear.

Eventually, Brandi Glanville showed up to the party -- allegedly uninvited, but as Kim Richards' +1 -- and revealed she had given Denise a heads up that she would be there. Though producers broke the fourth wall and said Denise's husband Aaron Phypers sent them a text saying there was a "family emergency," it was obvious she simply wanted to avoid a scene with Brandi -- who she had yet to see in person since the hookup allegations were revealed.

The truth started to come out when days after the party, Garcelle, Rinna and Dorit met up for drinks. Beauvais said Denise eventually texted her, saying she didn't answer any of her calls that night because she "didn't want you to have to lie for me." That confirmed the "family emergency" line to the show's producers was a lie.

At that point, a message came on screen saying, "In the following days, Denise sent cease and desist letters to cast and producers." Shortly after, the DailyMail article from January first revealing Brandi's hookup claims dropped and Richards didn't film for two weeks.

Eventually, she shot a one-on-one conversation with Rinna ... and it did not go well.

It's clear Denise felt like there was a setup going on, as she asked Rinna whether she knew Brandi would be at the party. Lisa denied it, before Denise confirmed Glanville's appearance was the real reason why she didn't show up. "I did not want to go and have her create some Jerry Springer f--king moment," she said, as Rinna asked her to confirm she totally made up the "family emergency." She did.

"You lied, that's a lie," said Rinna, who went on to say the text messages Brandi showed the group "really confused" her -- because they proved, to her, that Glanville and Richards had a friendship, something Denise has continued to deny.

In a confessional, Denise insinuated Brandi doctored the texts, saying, "there is an app that can revise text messages, so whatever Brandi has, I don't even care." She added, "if I'm going to be put in a corner where I have to present text messages, not only will I present Brandi's, I will also present Lisa Rinna and I don't think either one of them want me to do that. But I will."

Rinna then brought up the cease and desist letters, which blindsided Denise. "You wanted the footage taken out," she said to Richards. "Who told you that?" asked Richards. Replied Rinna: "Oof, you're so angry."

"This is slanderous," Denise exclaimed, before revealing how she's been dealing with the situation with her older daughters, Sam, 16, and Lola, 15. "I explained to my kids, there's stuff that's been said about your mom that's not true and all you have to do is hold you head up high and move past it," she said, "And it's a lesson for you guys to see we can't let that take us down and you have to just move on."

"It was actually a lesson for me to talk to the kids about that," she added, as Rinna said that was one "positive" to come out of the situation. "It's a conversation you don't really need to have, but what else was I gonna say," replied a clearly angry Denise.

While they both told each other they'll always be there for each other, their body language and tone said otherwise. In a confessional, Rinna said the two just won't see eye to eye here and "that puts us in a dead end in our friendship and that's sad."

Though the season is over, the drama isn't. The three-part reunion kicks off next week -- watch the trailer below!