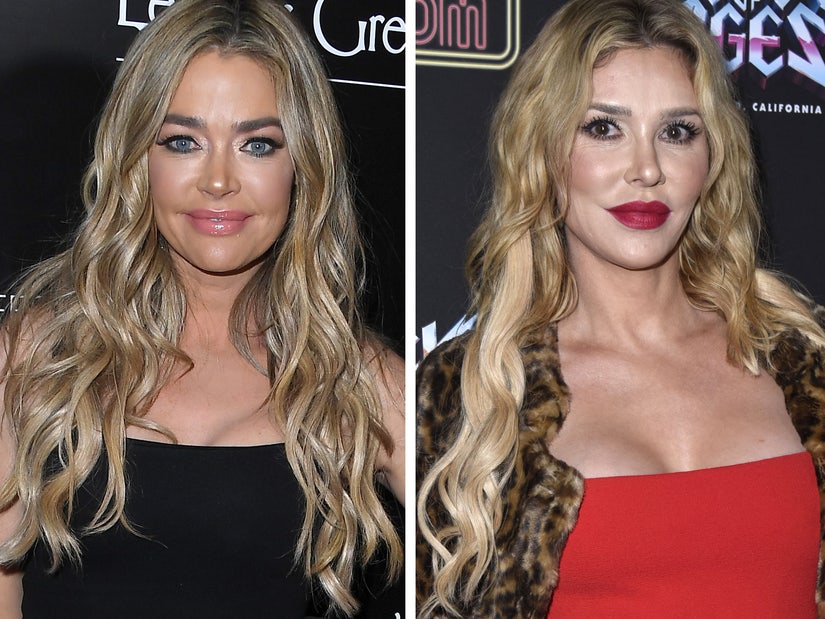 Denise insinuated Brandi's texts could be doctored amid feud over their alleged hookup.

Brandi Glanville has "unfinished business" with Denise Richards, after the current season of "Real Housewives of Beverly Hills" ended without them ever addressing their feud face to face.

On the new episode of her "Unfiltered" podcast, Glanville said that while she was "so drunk" when she watched the finale this week, she still had "some things to say" about what went down.

If you haven't been following the drama, Brandi previously claimed she and Denise had sex. Glanville said she was led to believe Denise and husband Aaron Phypers had an agreement where Richards could hook up with women. But, according to Brandi, after they had sex, Denise allegedly said Aaron would "kill" her if he found out. The other women all got involved when Brandi also claimed Denise talked smack about them behind their backs.

After Denise denied even being friends with Brandi, Glanville showed the other women their text conversations -- which, while innocent, seemed to prove they weren't exactly strangers. On Wednesday's episode of RHOBH, Denise, however, insinuated the texts could have been doctored with an app and threatened to release the real messages they exchanged.

"I'm not lying. I'm telling the truth and they've all seen my phone," Glanville said on her podcast Friday. "Denise, she says's there an app ... if you know me, I can barely use [my iPhone]."

Glanville said she wished she could have gone to Rome -- where Teddi confronted Denise with Brandi's claims -- so she could have spoke with Richards about everything face to face.

"It sucks I couldn't follow it up and have a conversation with her. Again, I wasn't going to say is 100% on camera, but once you tell on person in the group, which I told Kim, you kind of have to," she explained. "If it doesn't come out of your mouth, the story's gonna get be misconstrued and it's going to be a game of telephone where it's just a giant shit show."

In the latest episode, Richards didn't show up for Dorit Kemsley's holiday party after Brandi texted her and gave her the heads up that she would be there too.

"I said exactly what happened and I wanted to follow it up seeing her and I told her that and she even said she knew I was coming to the party and that's why she didn't come," said Brandi. "I texted her and said I really need to talk to you."

When her cohost said maybe she should have just surprised her at the party and not warned her, Brandi said she thought Denise could be up for a confrontation.

"I thought she was so, 'Oh my gosh this didn't happen,' that she would want to confront me like she did with Camille last season and Kyle this season," said Brandi. "She's not that person that runs away from something ... I don't think she can act her way out of this one. The truth hurts sometimes and I don't know. I would love to have a conversation with her now that I've seen all the conversations that she's said, all of her contradictions, it's hard."

She then said there's no way Denise has other texts, because they simply don't exist. "Maybe she has an app for that," added Brandi.

"Hopefully, one day, I will sit down with Denise and we'll get schwasted," she continued, before bringing up the upcoming reunion, for which she was reportedly interviewed separately from the other ladies.

The reunion kicks off next Wednesday on Bravo.