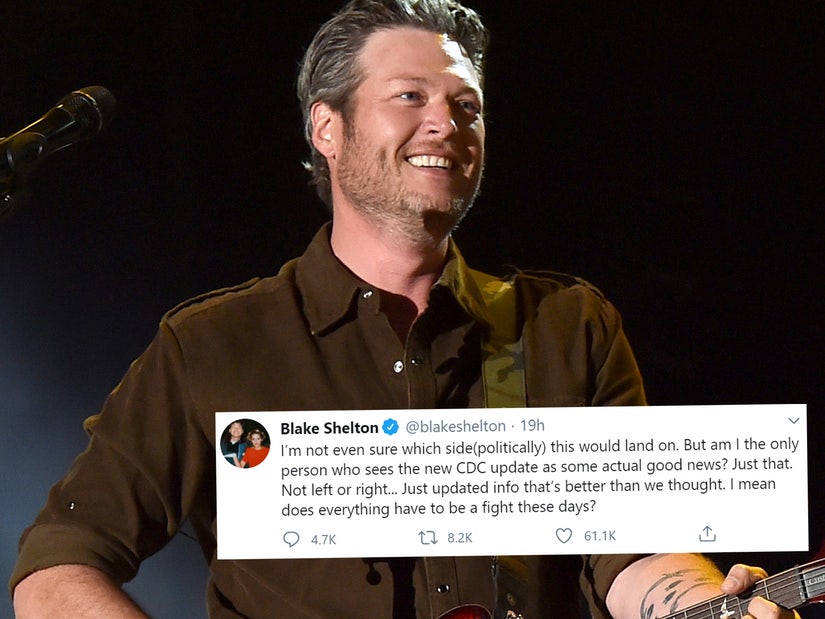 "Does everything have to be a fight these days?" he asked... and very quickly got his answer.

Blake Shelton waded into the Covid statistics debate on Sunday, and swiftly waded back out again.

The singer was reacting to the news/fake news that "only" 6 percent of Covid fatalities had been healthy people beforehand, and was trying to make a positive take on it... but he didn't get very far.

The drama kicked off on Sunday when a QAnon supporter called Mel Q tweeted some new statistics from the CDC (quoted from another users's Facebook post), which she claimed proved that only 6 percent of reported COVID-19 deaths were actually due to the virus.

"This week the CDC quietly updated the Covid number to admit that only 6% of all the 153,504 deaths recorded actually died from Covid. That's 9,210 deaths."

"The other 94% had 2-3 other serious illnesses & the overwhelming majority were of very advanced age."

Conspiracy theorists became even more fueled when Twitter decided to delete the original tweet, claiming it violated its rules — even though they were official statistics that did come straight from the Centers for Disease Control and Prevention.

However, what those fighting the flames on Twitter tried to point out, while the 6 percent refers to people who died solely of Covid; the "health conditions and contributing cases" the other 94 percent had included the likes of obesity, diabetes, or heart disease — conditions that people can live with for decades, and are certainly not an instant death sentence. (The 6 percent claim is similar to saying HIV never killed anyone; It hasn't, but has allowed other diseases to kill 36 million).

And this is where Blake Shelton came in.

"I’m not even sure which side (politically) this would land on. But am I the only person who sees the new CDC update as some actual good news?" he tweeted. "Just that. Not left or right... Just updated info that’s better than we thought. I mean does everything have to be a fight these days?"

I’m not even sure which side(politically) this would land on. But am I the only person who sees the new CDC update as some actual good news? Just that. Not left or right... Just updated info that’s better than we thought. I mean does everything have to be a fight these days?

Despite what seemed like a genuine effort to stay apolitical, the 8,600 retweets and comments instantly began firing accusations of the lying Left, slamming the government for shutting down the economy and destroying businesses.

When one liberal follower thought he was advocating for testing less, Blake clarified he was talking about the 6 percent figure... and fruitlessly reiterated he was not looking for a fight.

Sorry I should’ve been more clear. I’m talking about 6% news. Again I’m not looking for an argument from either side. I just see it as some better news is all. https://t.co/IqZORYGAfU

Another user lashed out at him, telling him to "do some actual research".

"A majority of the damn country has pre-existing health conditions. A lot don’t even know they have them." the critic wrote. "So, if they contract COVID, it's okay because those without will probably live? If you don't understand the info, just don't say anything."

Again, Blake insisted he was not here to fight...

This is what I’m talking about.. I’m not going to argue at all because I’m not advocating for anything. What is the fight? Covid is horrifying. That’s it. https://t.co/oRbs2usxeN

Finally, he gave up and exited the arena, literally minutes after he entered.

Whew... I can see that there’s no way a fight won’t erupt about this stuff. No matter how you slice it. And that’s last thing I wanted. Stay healthy and safe everyone.

"Whew... I can see that there’s no way a fight won't erupt about this stuff. No matter how you slice it. And that’s last thing I wanted," he wrote. "Stay healthy and safe everyone."

But when one last follower asked him to at least remind everyone to wear a mask on his way out... he did.