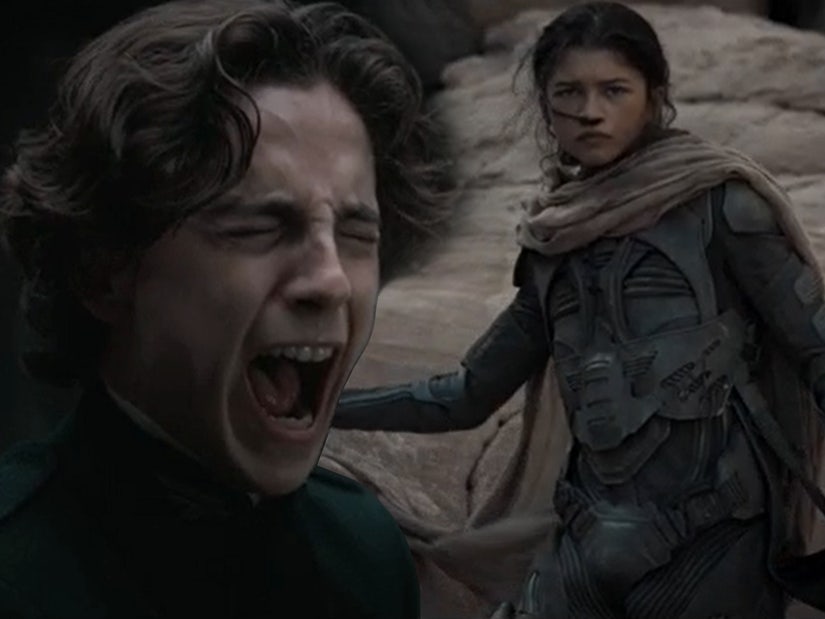 "Fear is the mind killer. When the fear is gone, only I will remain."

The highly-anticipated first trailer for "Dune" is finally here.

Following a Q&A with the cast hosted by Stephen Colbert, Warner Bros. dropped the jaw-dropping trailer for Denis Villeneuve's sci-fi epic, revealing the first look at Timothée Chalamet in action as Paul Atreides, a son of the noble House Atreides, who travels to the desert planet of Arrakis to protect the most vital resource in the galaxy.

Set to Pink Floyd's "Eclipse," the action-packed trailer, which shows insane visual effects, eye-popping landscapes and gigantic sandworms, features a glimpse at "Dune's" all-star cast including Zendaya, who plays Chandi, a blue-eyed Fremen native whom Paul sees in his dream, and Jason Momoa, who stars as Duncan Idaho, one of House Atreides' top warriors.

"I must not fear," Chalamet's Paul says in the trailer. "Fear is the mind killer. When the fear is gone, only I will remain."

Based on Frank Herbert's bestselling 1965 science fiction novel of the same name, "Dune" is directed and co-written by Villeneuve, who also wrote the screenplay alongside Jon Spaihts and Eric Roth.

Read the official synopsis below:

"A mythic and emotionally charged hero’s journey, 'Dune' tells the story of Paul Atreides, a brilliant and gifted young man born into a great destiny beyond his understanding, who must travel to the most dangerous planet in the universe to ensure the future of his family and his people. As malevolent forces explode into conflict over the planet's exclusive supply of the most precious resource in existence -- a commodity capable of unlocking humanity's greatest potential -- only those who can conquer their fear will survive."

Watch the trailer, above.

"Dune" is set for release on December 18.