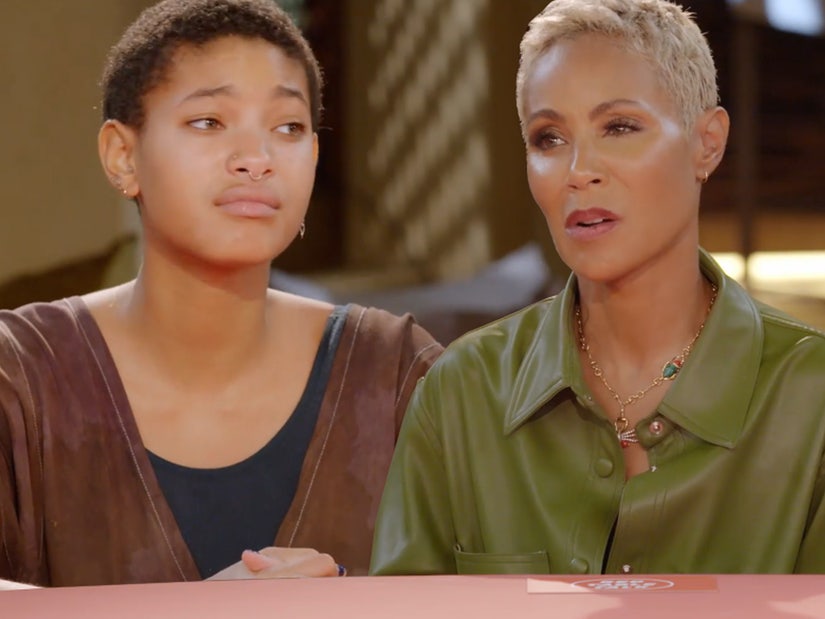 Willow reacts to the bombshell interview for the first time.

Jada Pinkett Smith's mother and daughter are proud of her for opening up about her "entanglement" with singer August Alsina.

A new episode of "Red Table Talk" dropped on Monday, in which Jada, Willow Smith and Adrienne Banfield-Jones spoke with guest/author Brené Brown about vulnerability.

Calling vulnerability "the birthplace of courage," Brown praised the women for bringing that to the Red Table every week. "You don't know the way the conversations' gonna go," she said, celebrating them for taking risks and exposing themselves emotionally.

"Hell yeah. I'll tell you Brené, we definitely be trying to practice some vulnerability over here," said Jada, before all the women shared when they felt most exposed on the show.

"For me, it would be the last RTT we did," Jada explained, before a clip from the Alsina episode was shown. "Full blast of, like, flaws, and feeling and just the total breakdown of any mask."

Gam gave her daughter props for displaying "so much courage" in the episode, as Willow added, "I'm so proud of you."

"To be able to see you and dad do that, for me, that was like, okay that's real deal. That's real love," she said. "When you can be like, I'm with you, I'm gonna stand by you and I'm gonna hold your hand because I love you. That's what we do and that's really important."

During the episode back in July, Jada first called her time with Alsina an "entanglement," before confirming it was a relationship -- one that happened while she and husband Will Smith were on a break and on the brink of divorce.

For Willow, she felt most vulnerable when she opened up about self-harm on the show. In 2018, Smith said she began cutting herself on her wrist following the success of "Whip My Hair" -- as a way to make her "physical circumstances" match the "emotional pain" she was going through at the time.

"Looking back, it makes me feel even stronger because so many people DMed me or talked to me and were like, 'Wow, that really helped me,'" she explained.

Some more insight into Willow's upbringing came when the women all spoke about shame and how it affects both the victim and the person inflicting it on others.

"I did really try, especially in raising Willow, in trying not to put shame around her social development, you know, trying to raise a young woman and what a young woman goes through but not recognizing how detrimental that is, using shame as a parenting tool," said Jada.

"It's okay, I forgive you," said Willow, as her mom asked for an example when she did use shame against her.

"I did have a lot of those moments where I was like, 'Oh no, no, no… we not gon' do that,'" Jada admitted, before saying that shame came from her own inability "to handle my own tears."