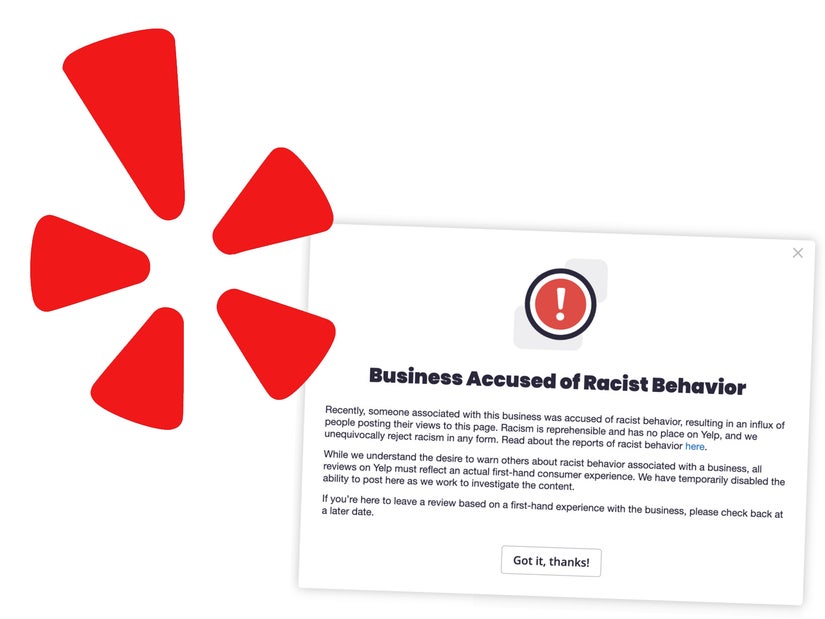 The new warning will link to a news article about the alleged racist incident.

Yelp is to begin flagging businesses that have been accused of racist behavior.

In a lengthy blog post published Friday morning, the business review app said it was introducing a new Consumer Alert that warns of companies "that may be associated with overtly racist actions."

The purpose of the new function is two-fold: to ensure customers are welcome and safe at a particular business, but to also prevent people leaving reviews based on things they've read in the media, rather than first-hand experience.

"As the nation reckons with issues of systemic racism, we've seen in the last few months that there is a clear need to warn consumers about businesses associated with egregious, racially-charged actions to help people make more informed spending decisions," Noorie Malik, VP of user operations wrote.

"Now, when a business gains public attention for reports of racist conduct, such as using racist language or symbols, Yelp will place a new Business Accused of Racist Behavior Alert on their Yelp page to inform users, along with a link to a news article where they can learn more about the incident."

Amid unrest following the killing of George Floyd, Yelp rolled out a number of initiatives to support Black-owned businesses this summer; while it recorded a surge in searches for such businesses, it also witnessed a surge in reports of racism in reviews, and more than a doubling of reviews being left stemming from media reports, rather than experience.

"We don't allow people to leave reviews based on media reports because it can artificially inflate or deflate a business’s star rating," Malik wrote.

The company said that if someone associated with a business is accused of, or the target of, racist behavior, it will place its existing "Public Attention Alert" — introduced this summer — on the business page to warn consumers that the business may be receiving an influx of reviews as a result of increased attention.

However, for business accused of "overtly racist actions" — in which there is at least one news article from a reputable source detailing it — the warning will be upgraded to the new "Business Accused of Racist Behavior Alert", with a link to that news article provided.

The alert will inform consumers that all reviews have been disabled while it investigates the incident itself. Anyone who wants to leave a subsequent review alleging racist behavior based on first hand experience will be told to "check back at a later date."