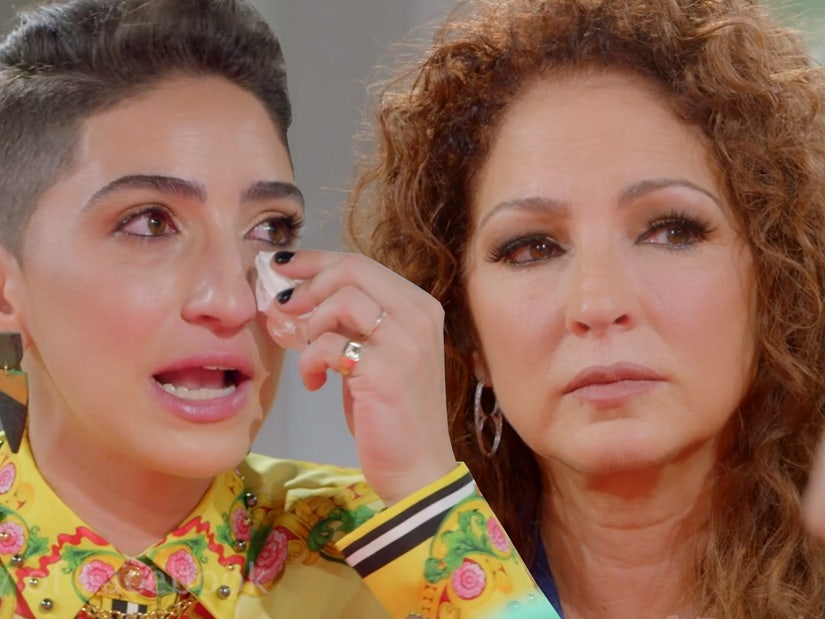 Both of them were in tears, as they revealed Gloria's brutal reaction to her daughter coming out.

Gloria Estefan is a gay icon, but that didn't make her immune from handling her daughter Emily's coming out in less than perfect fashion.

In the second episode of their "Red Table Talk" spinoff, "Red Table Talk: The Estefans," the pop star, her 25-year-old daughter and niece Lili had an incredibly candid -- and, yes, sometimes argumentative -- discussion about sexuality.

Emily explained she first tried "testing the waters" about coming out to her parents by simply asking them, when she was 21, "Do you think I might be gay?" They initially told her, "Only you can know that."

She said her first sexual experience was with a woman, before being intimate with a man two weeks later. When she started dating her now-partner of four years, Gemeny Hernandez, it was then she "knew there was something different" there.

"When I was finally ready to come out with this information, I was really nervous," she continued. "I was like, 'Hey, I'm in love with this girl,' the first thing [her mother, Gloria] said was, 'If you tell your grandma and she dies, her blood is on your hands.'"

Tears in her eyes, Emily said she "wasn't ready" for that reaction. "I understand, my grandma was old, but I felt like, 'Whatever it is, hide it.' That's where my hurt started," she added. "I'm never going to forget that."

Gloria, however, had a slightly different POV. She explained she and her conservative mother had a "complicated relationship" and had even once been estranged for a two-year period. Her mother was also unhealthy, battling ulcerative colitis. In her mind, Gloria was "trying to protect both my ailing mother ... and Emily from anything that could harm their relationship," she explained.

"In my mind was, if Emily tells my mom and something happens to my mom, then she will forever be thinking guiltily that she might have caused that situation," Gloria continued, "and I didn't want any kind of correlation between Em's sexuality and my mom getting sick."

Gloria suggested Emily first introduce her girlfriend to her grandmother as a friend, so that she could "could become part of her life" before revealing the full story. "We needed to protect abuela, but I needed you guys," Emily told her mother and cousin.

"I was falling apart. I didn't care if every single person in the world knew I was gay," Emily continued. "I was worried about my family, because my grandma was older and sick and I was like, wow, this is something that could kill somebody?"

Emily also said her mother warned her about holding hands or showing affection to Gem in public, for fear it could get back to Emily's grandmother or the public at large.

"No way, shape or form should you ever tell your daughter, 'Why do you gotta walk in here with your arm around your girlfriend and put a sign around your neck?' No, you don't say that," Emily told her mother.

Gloria explained that, because Emily wasn't yet out to the world, she worried anyone at a restaurant could snap a photo and "give your story" away. That part, Emily understood, saying, "I'm a celebrity's kid, so if I go out there and somebody takes a picture, I'm hosed."

The elder Estefan was also worried any talk of Emily's sexuality would overshadow her debut album release. "You're talking about my career, I was suicidal," said Emily.

"We didn't know that, mama!" said Gloria. "We had no way of knowing this! I hate to know I was part of that hurt. We love unconditionally and what we try to do sometimes to protect you, ends up hurting you, which kills me and I hate that that happened."

Sadly, Emily's grandmother passed away before she got to come out to her, something which clearly upset her as she teared up as she spoke. "I think she would have been better than all of y'all," she added with a laugh.

The 25-year-old musician went on to say she never had a fear that her parents would "dip and disown" her or kick her out of the house when she opened up about her sexuality. Her mother, however, said she still "lost you for a bit there" after Emily came out.

"I lost you," Emily told her. "Where's my mom? It sucked, but we couldn't even talk, because we were both hurt. You're Gloria Estefan, you're a gay icon, and I'm the miracle baby who now has started to sing. I really didn't want to let you down. I was hurting you and you were hurting me and that's all we were hearing."

While the emotions are clearly still a little raw between them, the two said they have been going to family therapy and it has been very productive. Emily also added that she "absolutely" forgives her mother for everything that went down -- and Gloria fully acknowledged she "said the wrong thing" with her initial reaction.