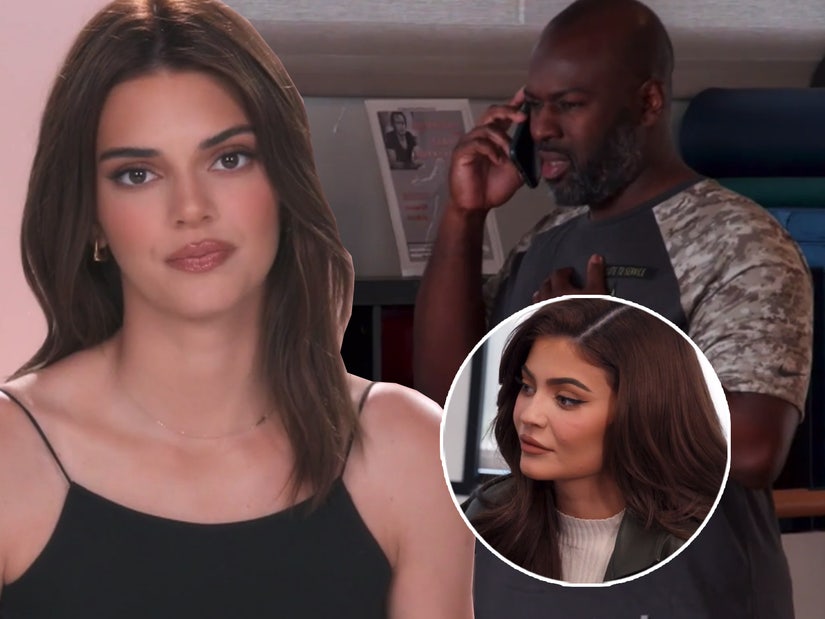 Kendall and Corey get into it over the phone over her wild Palm Springs fight with Kylie.

The episode started at the family house in Palm Springs. By the pool, Kim and Kourtney talked about the fight between Kendall and Kylie. Neither sister had talked to Kylie, but saw that she posted a photo to social media with her best friend, Stassi.

In Kendall's confessional, she said she was still upset because everything escalated and it didn't have to. She said Corey could've been the mediator between her and Kylie, but instead he was supporting Kylie's "get her out of the car" comment. She didn't think either Kylie or Corey were capable of taking it to that level with her.

Inside the house, Kourtney, Kim and Khloe talked more about the situation between Kendall, Kylie, and Corey. Kim said it sucked because for Kendall, regardless of what actually happened, it felt like Corey was ganging up on her with Kylie. Khloe said there was already tension with Kendall and everything just boiled over and it sucks for everyone. Kim brought up the fact that Kendall has anxiety that sets her off, too. Khloe felt bad that their mom was in the middle of the fight, but she wasn't going to pick a side; she'd just let them work it out.

North West: I honestly hate when family fights, but siblings fight. When I get mad at Saint, I make sure we don't go to bed mad. I have the Malikas write him an email thanking him in advance for his apology that I know I'm going to get. I sleep like a baby.

Back in Calabasas at Khloe's house, Khloe let Scott and Kim know that she talked to Kendall. Kendall felt like nobody had her side and no one had reached out to her. Kim said she didn't want to get involved. Scott said it was sad and he felt like there had to be a deeper issue behind the fight.

Khloe changed the subject and announced that she was taking her best friend, Malika, on a baby-moon since she was so close to her due date. Malika is not in a relationship with her baby daddy and it's been a hard journey for her, so Khloe felt like she needed to make this a trip for her to remember. Khloe really wanted Malika to feel loved and spoiled.

NW: I'm all for a baby-moon, but I wish Auntie Khloe would've run it past me first. I had to ask my other staff to cover for the Malikas at the last minute.

Scott coughed, which turned the conversation to coronavirus. Kim said that because of the virus, the kids in her kids' preschool weren't going to school. Kim said she's been paying attention to the news and she was trying not to panic, but the fear was definitely mounting.

Khloe kicked off Malika's baby-moon at lunch in Palm Springs. In addition to Khloe and Malika, the crew consisted of Malika's twin Kadijah, their friends Dominique, Ashley, and Crissy. The goal was to have fun, relaxing, stress-free vibes. At lunch they all shared mommy stories. Khloe remembered how she had to use her long nails to get a pomegranate seed out of her daughter's nose. Ashley talked about what it felt like to give birth. Malika was shook.

Khloe asked if Malika and her baby daddy were on good terms. Malika said that whenever he threw a fit she just called his mother and she got him together. Malika and her son's father have had some distance and it has been difficult. There were times she didn't want to see or be around him, but they have agreed to co-parent and bring their son into a loving environment.

On the car ride to the hotel, the girls talked more about having babies and the coronavirus. Malika said she had to have the baby, but she didn't want to be in the hospital with all the germs. The girls were going to be smart and responsible on the trip, but they were also going to have fun.

Back in LA at the Kylie Cosmetic offices, Kylie went to talk to Kris about her issues with Kendall. Kylie hadn't talked to Kendall, but felt they both thought they were right. Kylie said that Kendall never told her she needed to be dropped off at her house and she never agreed to that. Kylie would've loved to have figured something else out for her had she known.

Kylie thought there was a lot of miscommunication and she felt bad because things got out of hand. Kris thought the whole thing was silly because it was a misunderstanding and things were said that they didn't mean because they had too much to drink. Kris said when they both were ready, they needed to sit down and hash it out.

At Malika's baby-moon, the girls were settling into the hotel, Morongo Casino, Resort & Spa. Khloe had the idea to get comfortable and throw on some pajamas. Malika was not with it, she wanted to go to the casino. She wanted to put on regular clothes and go gamble.

NW: I need to give the Malikas more time off. They clearly don't get out much.

In LA, Kris and Corey went to a dance class to learn how to dance the Tango. Dancing wasn't Kris' thing, but she wanted to make Corey feel better since he was in the middle of Kendall and Kylie's fight. During the class Kendall called Corey.

Corey originally tried to extend an olive branch by inviting her to a Laker game. Kendall declined and let him know he handled the Palm Springs situation badly. She went on to say that both he and Kylie were yelling at her.

Corey corrected her and said that she and her sister were going on for five minutes before he even got involved and that she had already called Kylie names. This set Kendall off and she maintained that she didn't call anyone names.

While he tried to keep saying it was a fight between her and her sister -- and not him -- Kendall said he was 100% involved and she wanted an apology. He, however, didn't think he had anything to apologize for.

"You've been a rude person for years," he told her, getting fed up. "You're an asshole when you feel like it, you get riled up for no reason. I'm about to tell you the truth about how you are. You don't apologize for nothing."

"Just because I don't kiss your ass doesn't mean I'm an asshole," she shot back. "I just don't f--k with you. The fact that I can't even get an apology."

The conversion just went in circles and no progress was made. Corey mostly felt bad that Kris had to go through a situation where he was again pulled into a misunderstanding.

NW: This whole thing is messy and as a member of this family I feel bad for everyone involved. But as a businesswoman, I knew I had a job to do and I wanted to get as much of this on camera as we could.

Back at the baby-moon, Malika told Khloe that a random girl DM'd her on Instagram about her son's father messaging other girls. However, Malika said that he's not her man so it's not her problem. Malika then posted on her Instagram for other people to stop sending her news about her son's father because she was single. Khloe and Kadijah cringed, while Malika thought it was genius.

She told her son's father about the DM because they have a son together and she didn't want him to look stupid. At the end of the day her loyalty was to him. Her friends wanted her to run her Instagram posts by them first in the future because not everything needs a response.

NW: It's PR 101: You don't feed the trolls! Have the Malikas learned nothing working for me?

The girls went down to the casino. Even though going to a casino wasn't Khloe's idea of a baby-moon, it was fine because she wanted Malika to feel loved and it was all about her. While playing roulette, Malika was having labor pains. Khloe suggested going back to the room, but Malika wanted to play more games and have dinner before heading back to the room.

At dinner, Malika asked the girls how long she should wait to date after having her baby. Khloe said six weeks, but her sister said two weeks. Malika never envisioned having her baby and being single, but she wasn't going to allow anything to overshadow her excitement of becoming a mother.

The next day, Malika was still having labor pains. Khloe and Kadijah were teasing Malika about how bad she'll be in labor. Malika said that even though she couldn't do much, she loved her baby-moon and she felt like she went out with a bang.

At Kris' house, Kris asked about Corey's conversation with Kendall. He said it went nowhere because Kendall had her opinions. Corey didn't feel any type of way about the fight because fights happen; he just didn't like being in the middle of it. Kris didn't like being in the middle, either. Corey wished it would've stayed between the sisters and he wished it would've never happened. Kris hoped that everything would work itself out.

At Khloe's house, Khloe wore a mask and gave Kris a mask because of the coronavirus. Kris looked very concerned because Scott was sick and Kim canceled all her meetings. Khloe said that Khloe's nanny went home and her nose was runny. Since she got back from the baby-moon she wasn't feeling great and because of the virus she's doing her part in being safe. Khloe read reports about the virus spreading. Kris freaked out a little bit and said she wasn't sticking around to get the virus.

NW: I used the virus as an excuse to not see my family for at least 3 months. It was great.

Khloe went to Kendall's house where she had a photo shoot for the cover of Architectural Digest. Khloe showed up with a mask on just to be on the safe side. She still felt ill, but she wanted to be a supportive sister and check on Kendall. Kendall said she talked to Corey, but he kept repeating the same things. She knew she deserved an apology.

She also said she hadn't heard from Kylie in a week and felt it was "kind of another slap in the face." She thought about being the bigger person and calling Kylie, but she wanted her sister to grow up and realize that she was wrong. She felt she deserved a phone call. Kendall admitted she had a big ego (like everyone), but she would be able to put it aside to do what was right.

Khloe said this was major for Kendall and Kylie. She hadn't seen them fight like this in years. She hoped that they would resolve their issues soon, but both girls were adamant about their stances.

NW: This is sad, this is chaotic, this is frustrating....THIS IS RATINGS!