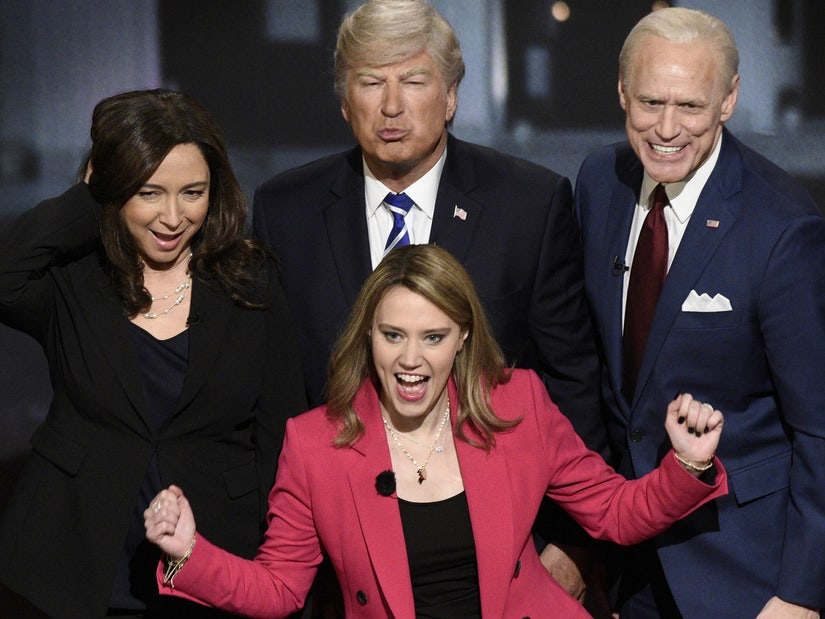 "One town hall was a thoughtful, cogent discussion of the issues facing our country," a voice-over announced at the beginning of the cold open. "The other featured President Trump."

"One town hall was a thoughtful, cogent discussion of the issues facing our country," a voice-over announced at the beginning of the cold open. "The other featured President Trump."

The late-night sketch show, however, took aim at Biden as well, while suggesting viewers couldn't choose between the two televised events, which were in lieu of a second presidential debate.

"We now present a rebroadcast of those town halls, the way most Americans watched them -- flipping back and forth, trying to decide between a Hallmark movie and an alien autopsy."

The "Hallmark movie" consisted of Jim Carrey as Biden for the third time this season and he, once again, played him up as an affable, not-quite-with-it grandfather figure.

"I've given every audience member a glass of warm milk and a blanket," Biden told George Stephanopoulos (Mikey Day). "Now, who's ready to have some fun with some facts and figures?!"

The gist of the Biden ribbing was that the 77-year-old politician gave long-winded answers, often slipping into anecdotes from days gone by.

"And that brings us to 1939, a year where I went to the World's Fair and met the real Mickey Mouse," Biden was heard saying, before asking a town hall participant, "Does that answer your question?"

The frustrated audience member replied, "If I say yes, can I sit down?"

Over on the Trump channel, aka "alien autopsy," Kate McKinnon kicked off the event by channeling the NBC news anchor who made headlines for grilling the President effortlessly.

"Good evening, America. I'm surprise bad ass Savannah Guthrie, and if you were angry with NBC for doing this town hall, just let me get a few questions in and I think you'll thank me," Guthrie coyly explained.

After asking Trump if he condemns the conspiracy theorists of Qanon, Alec Baldwin, reprising his role as the 45th President, answered, "You mean the group that thinks Democrats are a cabal of Satan-worshipping pedophiles, and I'm their messiah? I don't know anything about them at all."

And when he defended retweeting other conspiracy narratives, Guthrie pushed back, saying, "Okay, but you can't just do things like that. You're not just someone's crazy uncle."

Trump replied, "Really? Because this conversation we're having right now is a preview of Thanksgiving dinner. So crazy uncles, stand back and stand by."

As the channel switched back and forth between the town halls, Biden was portrayed as both Mr. Rogers and Bob Ross ("Each tree has its own personality, just like America"), while Trump got in a WrestleMania-like bout with Guthrie, flying folding chairs and all.

Meanwhile, Maya Rudolph's Kamala Harris showed up to question the existence of the "nodding lady" in Trump's audience, who emphatically shook her head in agreement whenever the commander in chief spoke.

"What the hell is happening with that woman back there? Because I only nod that much when a waiter asks if I'll be having mimosas at brunch," Harris said.

The remainder of the show, hosted for the first time by "Insecure" creator and rising superstar Issa Rae, was highlighted by the stripped-back performances of Justin Bieber.

For his first song "Holy," the pop icon brought up Chance The Rapper, who is featured on the new track. Bieber then followed with a raw rendition of his ballad about growing up in the spotlight called "Lonely."

"Everybody knows my past now, like my house was always made of glass / Maybe that's the price you pay for the money and fame at an early age," he sang.