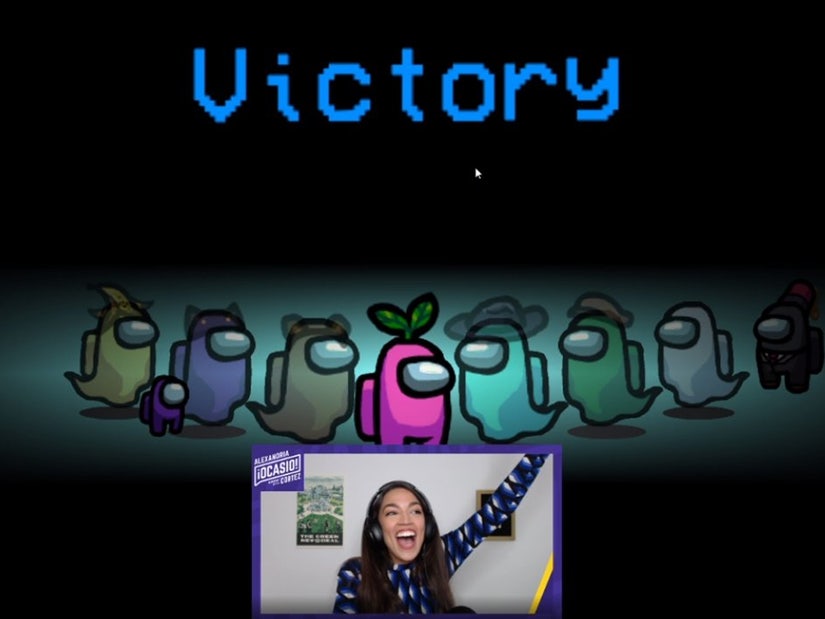 More than 400k people witnessed a congresswoman go on a virtual murder spree... and all it did was increase her popularity.

Congresswoman Alexandria Ocasio-Cortez had almost a half a million people watching her try the game Among Us for the first time on Tuesday night.

Despite being a complete n00b at the game, she is now in the top five Twitch stream concurrent viewers of all time, a list packed with pro-gamers; (for comparison, the list is topped by a 2018 Fortnite session which included Drake, Travis Scott and Ninja).

Join me, @pokimanelol, @hasanthehun, & more on Twitch TONIGHT as we help folks make a voting plan at https://t.co/TskRLfhCt3 and officially declare orange sus on Among Us 🍊

The hugely popular game pits ten players in a spaceship (or base), each represented by an adorable little colored spacesuit. While the majority play crewmates and must complete maintenance tasks (in the form of minigames), some members of the crew are secret imposters — and it's up to the rest of the crew to find out who.

Imposters must sabotage the ship or kill the rest of the crewmates without getting found out; every time a dead body is found the surviving members must meet and vote on who they think the imposter is... which leads to accusations thrown, plenty of lying, and crewmates turning on one another — and the internet could not get enough of it.

AOC was joined on the session by fellow congresswoman and n00b Ilhan Omar, as followers delighted in watching them get to grips with the undeniably addictive game, while the pair used the platform to encourage voting, which just happens to be the most important mechanic in the game.

highlights from the @AOC among us stream - my love for this woman knows no bounds 💖 https://t.co/aZErKVAlVw pic.twitter.com/OCa06KMuob

AOC talks healthcare with @Hbomberguy, who is from the UK, where healthcare is free. pic.twitter.com/3wMUZXpuF7

While it was literally all fun and games, commentators pointed out the congresswomen had managed to grab the much-sought but ever-elusive attention of more Gen-Zers than many of their congressional colleagues could hope to dream of.

Before she'd even started, AOC proved she was already au fait with the terminology while throwing a dig at a particular partisan opponent.

"Join me, @pokimanelol, @hasanthehun, & more on Twitch TONIGHT as we help folks make a voting plan at http://iwillvote.com and officially declare orange sus on Among Us," she tweeted.

"Sus" means "suspect" or "suspicious" in the game, used to mark someone who you think might not have the team's best interest at heart. The orange character, meanwhile, has inevitably become associated with President Trump.

There were many highlights for the evening, including: the Green New Deal champion being  mystified (and probably disgusted) that an advanced spaceship still uses gasoline and a combustion engine (she was equally skeptical of the ancient décor of candelabras and cobwebs).

There was also her adorable gasps at every shock turn of events, though she sounded even more horrified when discussing the UK's public healthcare compared to the US's private setup with a English gamer in the waiting room before one round.

Then there was the round when she realized she and Omar had to be the imposters together, admitting "it's gonna be amateur hour up in here."

While she may have made a couple of enemies aboard the Skeld, AOC no doubt further cemented her already steadfast fanbase, and likely picked up a few more fans on Tuesday night too:

cannot emphasize enough how much of a delight it is to watch @AOC murder her constituents https://t.co/1EHMFlWGl1 pic.twitter.com/L94Xcwb9kU

Nearly 400,000 people are currently watching @AOC play a video game. Many members of Congress don't even have that many Twitter followers... pic.twitter.com/mWfuiKVoSl

I was watching AOC, and someone edited Twitch streamer onto her wikipedia, and now I'm dying :D pic.twitter.com/xQf7UTxmjM

.@AOC's Among Us Twitch Stream featuring @Ilhan is officially the 3rd most watched broadcast in the history of the platform.

also me watching aoc play among us on twitch: pic.twitter.com/UXquuJCpmU

I feel like watching @AOC not really knowing how to play the game but just diligently trying to do all the tasks no matter if she’s crew mate or imposter is kind of the perfect distillation of who she is as a public servant. pic.twitter.com/T3AOtkmbHI

She needs to hit over 600k to surpass Ninja. She's at 439k pic.twitter.com/VQCvvyPsUK

Me watching @AOC play among us pic.twitter.com/dferhVjTmd

Ilhan when she gets imposter pic.twitter.com/Er3ystO70Z

ilhan and aoc accusing each other of being imposter in among us pic.twitter.com/25QKTIf7I2

Fox news trying to find out what an Among us is so they can attack AOC for it pic.twitter.com/dre4Pa1wXI

*aoc literally just walking around doing tasks in among us*

AOC: "This has to be a professional. So I don't think it's Ilhan."

He keeps making unsubstantiated claims to those working in medbay. Orange is sus pic.twitter.com/g7Icgvpoww