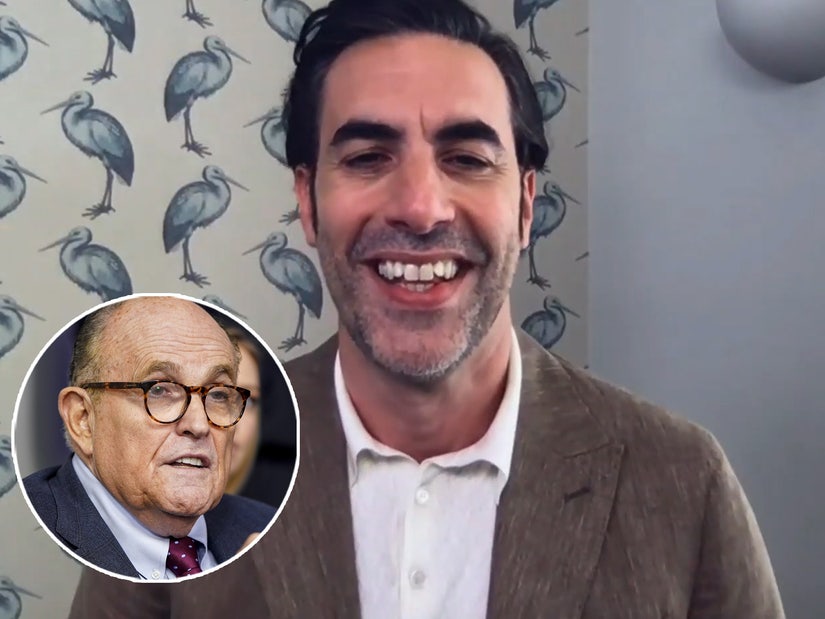 "I was in there for the entire scene," Baron Cohen said of hiding in a secret wardrobe built by the film crew.

Sacha Baron Cohen has given some behind-the-scenes intel after Rudy Giuliani issued a statement about his viral scene from the new "Borat" sequel.

Last week, Donald Trump's personal attorney took to social media to defend his name after he appeared to have his hands inside his pants while alone in a hotel room with Borat’s daughter Tutar (24-year-old actress Maria Bakalova) during "Borat Subsequent Movie." Guiliani claimed he was leaning back on the hotel bed to tuck in his shirt after Tutar removed his microphone.

"At no time before, during, or after the interview was I ever inappropriate," the former New York City mayor, 76, tweeted. "If Sacha Baron Cohen implies otherwise he is a stone-cold liar."

On Monday's "The Late Show," Baron Cohen told host Stephen Colbert what he thought of Giuliani's claim after Colbert asked, "Do you have anything to say to Rudy Giuliani about going into a bedroom with a supposedly teenage girl to drink whiskey and zip your pants up and down?"

"Well, he said that he did nothing inappropriate," Baron Cohen, 49, began. "And you know, my feeling is -- if he sees that as appropriate, then heaven knows what he's intended to do with other women in hotel rooms with a glass of whiskey in his hand."

The English actor went on to reveal how production captured the climactic scene, which ended with Borat bursting into the hotel room, yelling at Guiliani, "She's 15! She's too old for you!"

"I was in there for the entire scene," Baron Cohen said of hiding in a secret wardrobe built by the film crew. "My only means of communication was that I would jump out at a necessary point. I would know what [Giuliani] was doing via text messages with the director."

The hilarity almost didn't happen, however, as Baron Cohen said he realized his phone was only at 3% power when he climbed into the wardrobe to hide himself.

"I thought, hold on, we've got Rudy Giuliani, we've got the president's lawyer, we've got this scene, this is the climax of the movie -- and no one thought it might be worth charging the phone?” Baron Cohen said with a laugh. "So, I managed to keep it on airplane mode and occasionally check in."

He also said Giuliani had a private security guard sweep the hotel room before the interview. Borat's secret wardrobe went unnoticed during the sweep, according to Baron Cohen.

"Rudy thought he was alone with her," he explained. "The security guard, ex-cop, sits outside the room, ensuring that no one could come in and out, which is actually even more scary, when you think about it, for her."