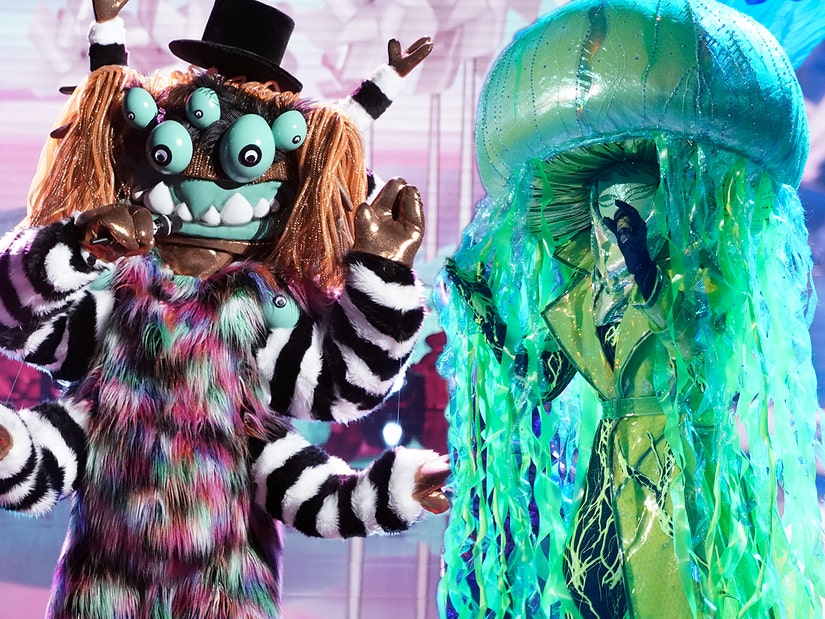 Group C finally unleashes Broccoli, Jellyfish, Lips, Mushroom and Squiggly Monster on the world -- but who was just as quickly sent home?

This is what we waited a month and a half to see? This is the group so special, “The Masked Singer” held them back until after both other groups had performed twice?

Okay, there are some great costumes here and some fun personalities, but if you were wondering where all the not-so-great singers are this season, we’ve found them! 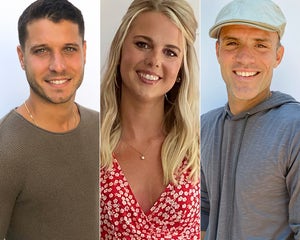 It’s still enjoyable trying to guess who they are, and laughing at how terrible Ken is at it. We just kind of feel bad for all those great singers in Groups A and B who are having to face off against each other when they could mop up the floor with the likes of this group.

Okay, not this entire group. There is one incredible vocalist here and one possible contender, but you’ll just have to read on to find out who they are -- well not who they are, obviously. Unless one of them actually got the boot?

Let’s jump into this week’s batch of contestants, complete with clue packages and performances. And don’t worry, before we get to the shocking unmasking, we're going to make you power through the terrible (and occasionally good) guesses made by our illustrious panel of Robin Thicke, Jenny McCarthy, Ken Jeong and Nicole Scherzinger first. We do this because we love ... to torture you.

Squiggly Monster gave it his karaoke best on this CCR classic, but he certainly didn’t have the gravitas or vocal control to make us believe he is a singer in any facet of his life. His stage presence was largely lacking, too, as he mostly just stood there and bounced. He has an okay tone, but that’s about it.

Guesses: Robin picked up on father figure clues and eye-rolling, as well as comedian vibes, to go with Ray Romano. But does that work with visual clues like chocolate chip cookies, buttons and balls of yarn?

What about a penguin and salami on a stick, as well as the whole video game aesthetic of the package? Jenny threw out Brad Garrett, but for some reason she picked up on a political angle with “My fellow Americans,” thinking maybe Al Franken, but is he that tall?

You know who’s not that tall? Ken’s terrible Dr. Fauci guess. In other words, the fact that this was not a singer opened it so wide they really have no idea. The internet wasn’t doing much better with guesses including The Rock, Darius Rucker, Rick Springfield, Kenan Thompson and Billy Ray Cyrus.

We’re clearly going to need some more clues and performances to try and make sense of this one.

I have a feeling that the Squiggly Monster is the Rock? The visual clues made me think of the new Jumanji movies #TheMaskedSinger

Yeah the squiggly monster is definitely Billy Ray Cyrus that has to be his voice. #TheMaskedSinger pic.twitter.com/PfVChnHfFz

Squiggly Monster is Rick Springfield I think.... he played a doctor on General Hospital, hence the stethescope in the clues. #themasksinger #TheMaskedSinger pic.twitter.com/i6gMB5DmCi

Mushroom hit with a falsetto that was sustained throughout. The panel went from sure this was a divine woman to convinced it was a man. One thing’s for certain, though, this is a polished vocalist who knows exactly what their voice can do. We can’t wait to get out of the head voice and hear what power was held back here.

Guesses: There could not have been more “Hamilton” clues if Mushroom had come out dressed like Lin-Manuel Miranda. There were also lots of gardening references, and the notion he was able to turn a career into a hobby after holding down a job that may surprise.

Nicole went with Lin-Manuel or even considered Anthony Ramos, but then took a left turn to Donald Glover. Ken, however, saw a “Star Search” image and decided maybe it was Usher.

Jenny saw the orange curtains and hot dog cart to frankfurter and thought maybe Frank Ocean. The Twittersphere is thinking of people like RuPaul, Billy Porter and Jordan Fisher, but there were some feeling the Anthony Ramos guess (despite “Hamilton” being hit a little too hard).

I think the mushroom is Jordan Fisher #TheMaskedSinger pic.twitter.com/bq3VJ8BeXc

Anthony Ramos is totally the mushroom. The star clue is for his role in A Star is Born #TheMaskedSinger

I would be shocked if the Mushroom isn't Billy Porter #TheMaskedSinger pic.twitter.com/pgync7Z22k

Jellyfish had a slight tremor in her voice that sounded like nerves she never quite shook off. She was actually stronger on the verses in this one, getting a little shaky and off her pitch in the chorus at times. She has a nice tone to her voice, but definitely carries herself like she’s not a professional. She definitely sounds unpolished.

Guesses: With a very young vibe and stage persona, and references to traveling coast to coast and having a legion of followers, Robin was thinking maybe this was Gabby Douglas. Ken, though, saw the underwater clues and thought of “Bubble Guppies” and Chloe Grace Moretz, but instead took the water to Awkwafina..

Other clues included a tiara, a list of the kinds of guys she doesn’t want, baby powder and an angelfish pal with a halo. Nicole was thinking of the VIctoria’s Secret angels, and perhaps a young influencer who is friends with models like that, like Sofia Richie.

Twitter was reading some Billie Eilish in those clues, though they were also throwing around names like Snooki, Marsai Martin (because of an “-ish” reference), and even a few nods for WWE’s Naomi because of the color scheme and overall attitude.

I think billie eilish is the jellyfish on the masked singer. The green. The ocean (ocean eyes) her lyrics on the board. She's performed at coachella. And you should see me in a crown. #TheMaskedSinger #JellyfishMask

Jellyfish is Marsai Martin, I feel it in my bones! #TheMaskedSinger #MaskedSinger pic.twitter.com/bxmqwQTJvA

— Mother Exhausted from the House of Tired (@QtwiddaBooT) October 29, 2020 @QtwiddaBooT 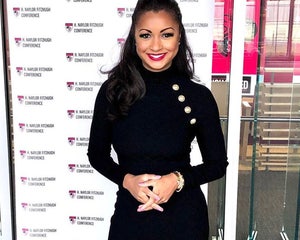 Broccoli did his thing like your dad taking the mic at your wedding and just having fun. He was competent, but certainly not dynamic as a vocalist or a performer on this one. He definitely carried himself like someone who is not comfortable on the stage.

Guesses: To our last point, he said he’s been on a lot of stages, so clearly not in any capacity similar to this one. He also dropped a lot of TikTok and influencer clues before performing and sounding like someone who’s in their 60s or better, so that was a lot of confusion.

He also referenced being a “Ladies Man,” and showed off cool cars and said he’s worked with some of the biggest artists. Other clues included a can of soup, a couple of dogs, a car wash and a swing … so Tim Allen?

Broccoli said he likes to eat healthy and even arm wrestled with Nick. Nicole went on the wild young-to-older journey, shifting her impression from Jason Derulo to Bill Murray (she took the swing to “swinging” a golf club.

Jenny is feeling that it’s definitely someone older, and took that car wash to perhaps mean Howie Mandel’s OCD about cleanliness and germs. Robin, meanwhile, saw the three men (mariachi band) and a baby, as well as iceberg lettuce to find Steve Guttenberg.

The internet was also confused by Broccoli’s package reflecting youth and performance giving off much older vibes, and it wasn’t helping them with their guesses. We saw Steve Martin (which could fit the three mariachi singers with “Three Amigos”),  as well as his co-stars in that movie, Martin Short and Chevy Chase -- of the three, Short got the most guesses.

Here’s my outlandish guess for Broccoli: Steve Martin. But I really have no idea. #TheMaskedSinger

Broccoli may be Chevy Chase or Martin Short #TheMaskedSinger

Lips was absolutely terrible as a singer, but she was clearly just hamming it up and celebrating her love for New York. She’s clearly from there. She was cracking jokes throughout this vocal, because she knows this isn’t her bag, but was just looking to have some fun with it.

Guesses: If this isn’t Wendy Williams, then there is a Wendy Williams soundalike on this show right now. Seriously, as soon as she started talking, it sounded like her from her energy, to her delivery and everything else about her.

Clues from the package included lots of roller skates and a disco ball, as well as a kangaroo, chili fries and the fact that people have always had strong opinions about her, and she always speaks her truth. She said she’s been shocking the public for decades, too, which all adds up to Wendy Williams in our book.

Robin was thinking of the ‘70s and ‘80s vibe in the package and that big personality pointing to Sandra Bernhard, Jenny saw the electric shock on the clue package, and thought shock jock and the rest of it came together and she agreed with us that it must be Wendy.

Nicole was totally on board with this, but Ken disagreed. “They are insane.” He saw the “West Wing Salad Bar” and skating and took those to Allison Janney, who is also funny and could be under there. But we all know this is Wendy, right? Twitter knows what’s up.

Okay my mojo is back because the lips is Wendy Williams... #TheMaskedSinger pic.twitter.com/Fil6bkeaP5

Like we don’t know The Lips is @WendyWilliams. #TheMaskedSinger pic.twitter.com/QG5T7kpmWZ

"THAT'S WENDY!" -me watching the Lips for .5 seconds on #TheMaskedSinger pic.twitter.com/9bWo06WD8C

We’re not sure who came up with these groups, or decided this was the one to hold off until after the World Series to introduce, but there is really only one truly strong singer in this entire batch.

We feel bad for the other groups, with good singers battling one another while some of these characters are going to coast along with basically no real competition. That said, there was one act that was decidedly worse than any of the others, and that was our girl Wendy -- er, we mean Lips.

But did the voting audience agree? Of course they did. Lips was easily the weakest singer of the bunch, though she did have a lot of fun personality. But who did the panel think she was?

There was absolutely no question that this was Wendy Williams.