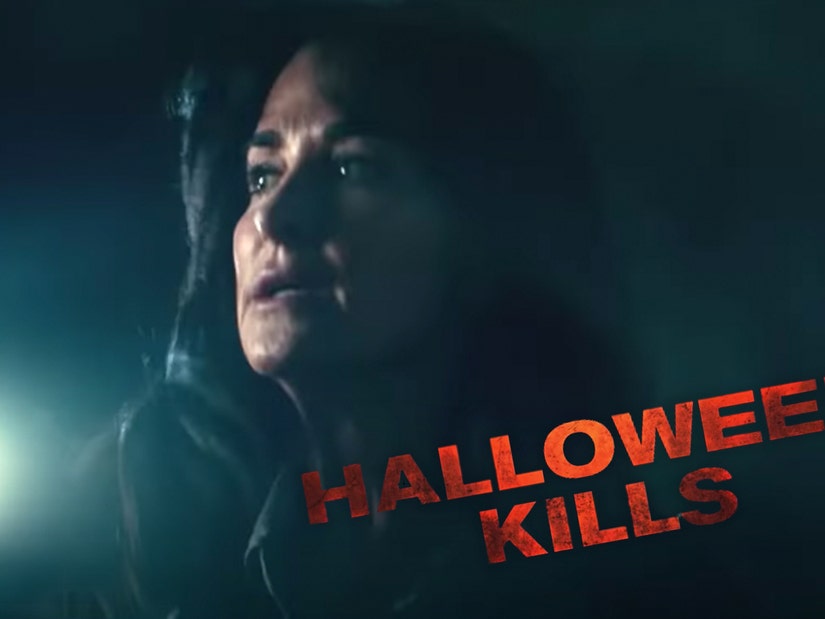 Jamie Lee Curtis says the new movie will show how the events of the first film affected others in the community.

43 years after Kyle Richards appeared in "Halloween" as little Lindsey Wallace, she'll be once again on the run from Michael Myers when "Halloween Kills" hits theaters in 2021.

While the movie was initially supposed to be released earlier this month, it was moved to next Halloween amid the pandemic. During Blumhouse's BlumFest earlier this week, however, the filmmakers dropped some new footage from the film -- which showed the "Real Housewives of Beverly Hills" star in peril.

During an interview ahead of the release of Blumhouse's "Freaky," TooFab asked producer Jason Blum what it was like having Richards back on set so many years later.

"It was great," said Blum, who noted that while he didn't visit the set himself, he checked in with director David Gordon Green regularly during production and had Blumhouse producer Ryan Turek on hand for the shoot.

"Our executive Ryan Turek was there every day and Ryan said it was pretty amazing," said Blum. "Very emotional."

Any attempt to get any other info about the movie out of Blum, however, proved fruitless. After star Jamie Lee Curtis teased the "mob" mentality of the movie in an interview with The Jess Cagle Show, we asked whether he could elaborate on that any further.

"If I talk about that in any way that will make you happy, Michael Myers will cut my legs off," he replied with a laugh, "so I can't do that. I'm very sorry."

Curtis was a little more forthcoming in her interview.

"[Halloween] 2018 was about Laurie's trauma, it was focused on Laurie Strode, but there were a lot of other people that had the result of Michael Myers in 1978 and we brought back all of those people," said Curtis. "So Kyle Richards, who played a little girl Lindsey, came back. We have the character of Tommy. We have other characters, Marion, the nurse."

"The 'Halloween Kills' movie is about a mob. What we were seeing around the country of the power, of the rage of voices, big groups of people coming together enraged at the set of circumstances, that's what the movie is. The movie is about a mob," she continued. "And so it's very interesting because it takes on what happens when trauma infects an entire community."

"It's a seething group of people moving through the story as a big angry group," she added. "It's really, really, really intense. It's a masterpiece."