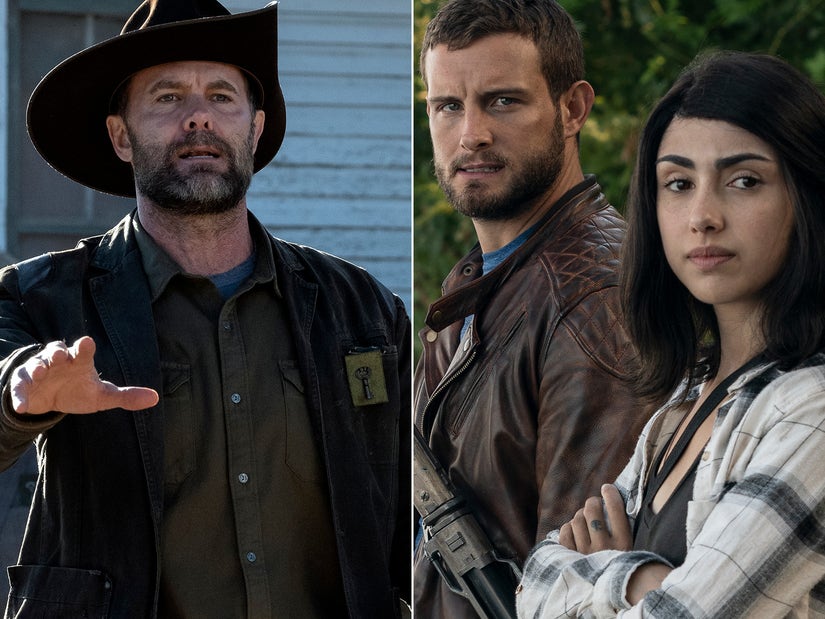 John tests the limits seeking the truth as one of their own is charged with murder on "Fear," while "World Beyond" ratchets up the tension facing its biggest threat yet before a heart-wrenching twist.

It's taking newcomer "The Walking Dead: World Beyond" a few weeks to really find its footing, but this week sees the show at its strongest yet.

The characters are ringing more true, the threats are rising, and a savage twist at the end adds yet another layer to the group's dynamics. As a quest-driven show, the dynamics of the group are everything. 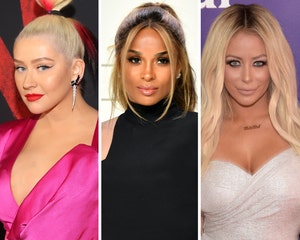 Celebrities Pull Out All The Stops For Halloween 2020: The Most Spooktacular Costumes

Week by week, we're flashing back to learn more about each of our main cast-members, with nebbish Elton getting the spotlight this week. It was in seeing what happened to him on "the night the sky fell" that we see he is so much more resourceful and strong than even he knows.

Meanwhile, over on "Fear the Walking Dead," we got another glimpse into this interconnected world Virginia is building. It's a strange mix of trust and fear, freedom and totalitarian control that is apparently all built on an illusion of safety.

A Good Man in a Bad World

We say illusion because this week's "Fear the Walking Dead" was asking the question of what happens when you put an inherently good man into an inherently corrupt regime. No matter what Virginia might want to present on the outside, which can be pretty brutal, it quickly becomes clear that the only reality that matters is the one she dictates.

All the while that John is showing that there are elements to Virginia's world he can appreciate, there is still the truth that she separated him from June. It's not logistically necessary, so it was cruelty, punishment, whatever you want to see it. It was about control.

And yet, John was seen writing letters to June speaking of the apparent merits of this world. Or perhaps he appreciates feeling useful. Or perhaps it's that this world looks pretty on the outside, but the second you peel back one layer it all falls apart.

John's world began to fall apart when a fellow ranger didn't show up for his duty, only to be found at his fence dead and being chewed on by walkers. As a former police officer, and in a constabulary position again, John logically felt this was something that needed to be investigated.

From the jump, Virginia wanted to just put the whole thing to rest. Had John allowed her to call it a drunken mishap, perhaps what happened next could have been avoided. And you can bet that's weighing heavily on his mind, even as he was willing to forfeit his own life for the truth.

His investigation uncovered the possibility of foul play. A deeper investigation revealed the man's throat had been slit, so it was definitely murder. While he told Virginia of his cursory investigation, uncovering an earring at the crime scene, he held back on the second as he'd already been told to stand down. 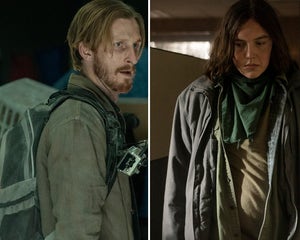 Fear the World Beyond: Walking Dead Night Brings Another Crossover Character Into Fear

By this point, Janis -- the former Pioneer who'd fled the group, only to wind up captured and with them again when Morgan's group surrendered -- was taking the fall. The dead man was her lover, she'd previously told John, and they were hoping to run away together.

But in her confession, she said she pushed him into the fence and watched the walkers kill him. No mention of slitting his throat. And yet, she knew that taking the fall for this was her fate. It was Virginia's will that she die to set an example and create that illusion of safety for everyone else.

Nowhere in there does it bother with the reality of what happened to the victim or who killed him, leading us to assume it was either Virginia or someone acting on her behest. Also, a motive remains elusive. Did she find out about the escape plan?

But Virginia then proved herself more complex than might seem, by offering a bit of the honey instead of the stick for John. Saying that his diligence helped them find the real criminal -- it did not -- she then rewarded him.

This after moving up the execution of Janis so John couldn't interfere, leaving her to be savaged and murdered by walkers outside of the community. Now, Strand had a bit of say in that, with Rabbi Jacob backing his play, but it was more about not allowing John to sacrifice himself.

The group is going to have to figure out how to get out of this situation, but Virginia's power is absolute so it's not going to be as easy as running away. Especially when Virginia has leverage, and so long as you care about anyone else, she has that.

As for that honey, John not only got a key to the city, so to speak, affording him new privileges, but he got a huge surprise at his door. Virginia reassigned June to Lawton, the town John (and presumably Virginia) lives in.

Is it reward? Yes. Is it also to keep that leverage and threat right in his face? Probably. Now, John has to look at June any time he thinks of stepping out of line to do what's right, knowing that Virginia is ruthless enough to -- well, slit her throat.

Outside of the community, Morgan received a package from Daniel, faking his brain injury, with Grace's jacket. Hoping to use her scent on it to get his hound dog to help him find her, he instead found those two idiots who were looking for Emile, the bounty hunter Morgan killed in the premiere.

In particular, they wanted that key that Emile had procured from the wanderer who stepped into his camp. But this is Morgan, we're talking about. Even after getting slammed by a car, he wasn't going to let two two-bit thugs take him down.

While he dispatched two guys we thought were going to be a much bigger deal, we learned definitively that they've no idea who Virginia is, despite being near her territory. That's interesting. But we also now have this mysterious key with no apparent direction.

Outside of these two, who else might know that Morgan has this key. And as he asked himself, what does it open? Will it somehow be relevant in his quest to free his people from Virginia? Is it tied to another group? Lingering questions. 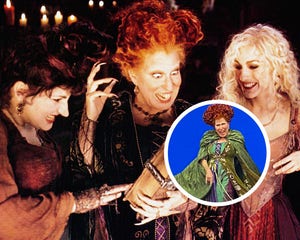 "The Walking Dead: World Beyond" ended its episode by closing the possibility of a tantalizing lingering question in genuinely heartbreaking fashion, and shame on us for not putting the clues together sooner.

This week, Elton got the flashback spotlight, where we learned he spent the end of the world hiding in a box inside the Museum of Natural History. His father had left to find a safe way out after the shit hit the fan.

His mother had left before that for a staff meeting. By the end of the flashback, we see that Elton came out of the box he was hiding in and actually found what was left of his father. He then found an evacuation map to the campus shelter and heads off.

He's five years old at this point, making it a remarkably exploration of his resiliency, tenacity and strength. Even at such a young age, Elton saw his father's brutally dead body, as well as carnage all around, and had the wherewithal to get himself to safety.

This kid has depths of strength he doesn't yet know. But while he saw his father's dead body, he has never seen his mother since, revealing to Hope that he was holding out hope that perhaps she was still out there.

Hope was happy to help him hold onto that, only to see a picture of her in a book he carries around him. A picture that looked familiar. Already, Hope has been filled with terrible guilt that she accidentally (startled) shot and killed the pregnant woman who'd killed her mother.

Now, that pregnant woman's face was looking up at her from Elton's book. It's another layer uniting these characters, albeit a hard and tragic one and one that will add even more weight onto the show's most developed character, Hope.

Connections, though, is what this hour was all about. Not only the need for a connection from one side of the Mississippi to the other, but the growing connection within the group. A connection that's been held back by Felix' ongoing plan to convince them to turn around.

That all finally -- and thankfully -- came to a head this week after Hope overheard Felix and Huck arguing about it, and Felix saying Elton was on board. The confrontation and blowup only served to solidify the group as a single unit moving forward, and it's about time.

There's nothing wrong with a saboteur arc to add drama, but this one was coming before we even had a cohesive group to root for. Finally, this week saw all six of our runaways working together to solve the river problem amid the looming threat of a group of walkers and a lightning storm.

Watching them try to push their makeshift boat into the water as walkers loomed at them was the series' first true high-tension moment, reminiscent of other scary "Dead" incidents on the other shows when walkers were still a threat to the survivors. 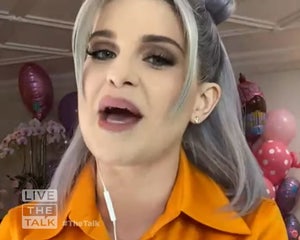 That's what "WB" has going for it, if it will lean more into it. These are novices out here compared to the other two shows, so the dangers are more real and palpable for them. In order for us to feel that, we have to feel for these characters and really get them.

We're finally getting to that point, and it's a stronger show for it. We're starting to believe the connections and bonds growing between them, making us care about them in the way they care about each other. All of them!

From here, the show can finally start to explore its destiny as a quest narrative to New York City. We're ready for new threats and dangers, alive and dead, because we know who we're rooting for.

Plus, even though they again didn't touch on it at all, there's still the overhanging threat of Kublek and her forces that decimated their entire community. Hopefully there's some sort of reckoning looming. These guys think they're tight now, imagine when they find out they're the last of their community alive!