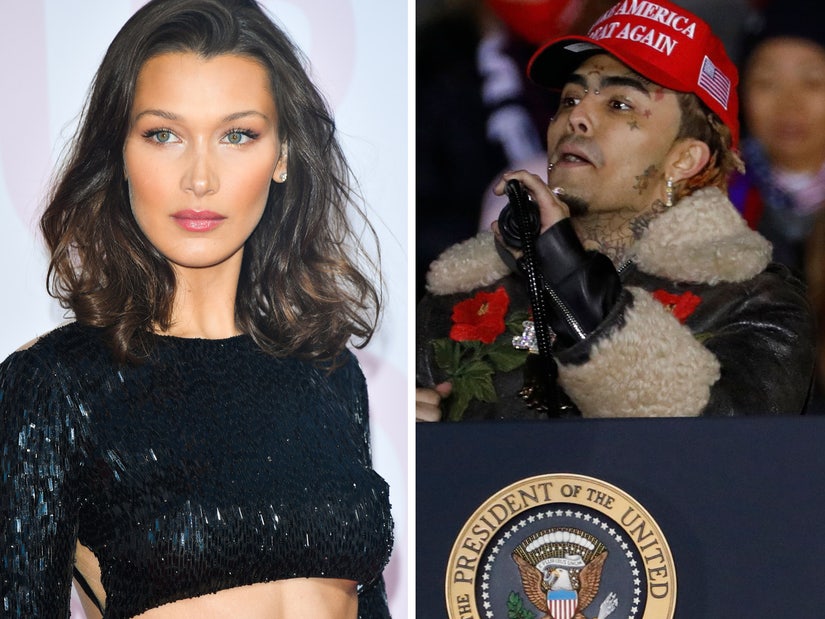 The rapper attended a MAGA rally on Monday night.

After first criticizing Joe Biden's proposed tax plan -- where taxpayers in New York City, New Jersey and California who earn more than $400,000 could see their combined state and local rates rise above 60% -- Lil Pump attended two rallies for POTUS, one in Miami on Sunday and at Trump's stop in Grand Rapids, Michigan on Monday.

Trump is about to deliver what might be his last ever rally speech in Grand Rapids, Michigan. Follow for a video thread. pic.twitter.com/5TA2TaPmQL

At Monday's event, however, Trump botched the rapper's name when introducing him to the crowd -- at first calling him, "Little Pimp."

"I love your music. And speaking of sounds, music, and other things, one of the big superstars of the world, Little Pimp. There he is," said Trump at the event. "How is it going? You wanna come up and say something? Come on, Little Pump."

Pump exclaimed "MAGA 2020" as he took the podium, a sentiment he also shared on Instagram while posing in front of a Trump flag while surrounded by a number of scantily-clad women.

Hadid shared the rapper's post to her Instagram story on Election Day, adding the caption: "This is so irresponsible. This kid is a loser."

She jokingly added, "Anwys, I'm going to Mars, you guys want anything?"

Hadid made her stance on Trump very clear earlier this week, as she pleaded with her 35 million followers to be "on the right side of history" on Election Day.

"There is only ONE party that will be receptive to the work and advocacy that the thought leaders of our generation, and past generations have been fighting for," she wrote. "Beyond anything, this election is about getting a racist, misogynistic, xenophobic, frankly disgusting man out of office."

"What kind of America do we want to live in? For our children to group up in? I want to live in a welcoming, respectful, helpful, smart, responsible and kind America," she continued. "What we’re living through right now, under Donald Trump's presidency, is the exact opposite. He won't even acknowledge his wrongdoings or the evil that is infiltrated and has permeated through the systems and certain groups/people in America. Because he believes in them!"

Calling it "one of the most important elections to day," she told her followers to "vote for empathy. Vote for science. Vote for a not blatantly criminal, racist president and VP."