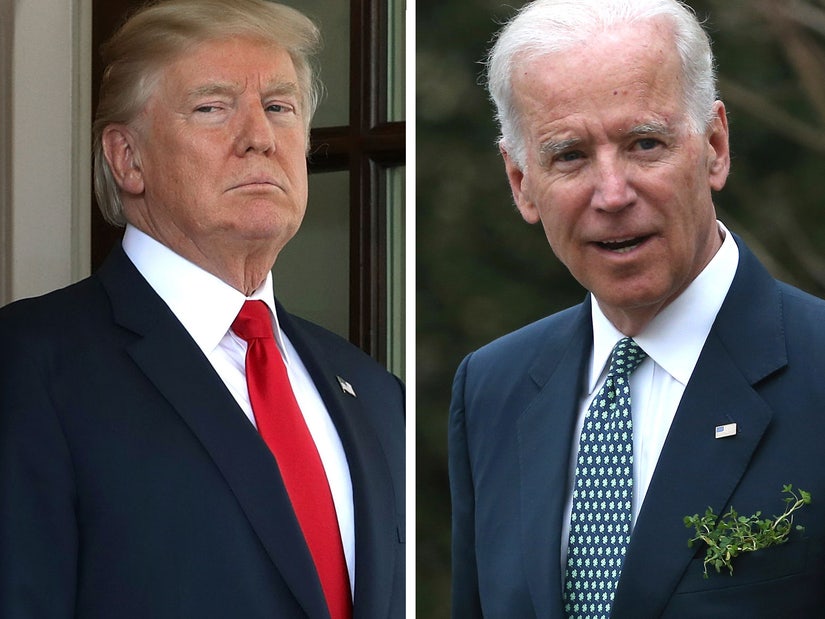 It's been a rollercoaster of emotions, so far.

The 2020 Election is not-so-quickly coming to a close and Hollywood, along with the rest of the country, awaits with anticipation and anxiety to see who will be the next President of the United States.

The nail-biting showdown between Republican incumbent Donald Trump and Democratic nominee Joe Biden brought out voters in droves to the polling stations. As the results for the "the most important election of our lives" began to trickle in, so did an outpouring of reaction flood social media from celebrities. 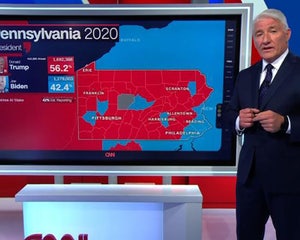 Florida was a hot topic, as the map color kept changing between red and blue all night ... stars celebrated Sarah McBride making history by becoming the first out transgender state senator in the United States ... and others shared what they stress eating or drinking while watching the wall-to-wall coverage.

As the night slipped into early Wednesday morning, Biden gave a quick speech to say that he was feeling confident still, but his followers needed to be patient until all the votes are counted. Trump then tweeted that the night was "a big WIN," promising a statement of his own. 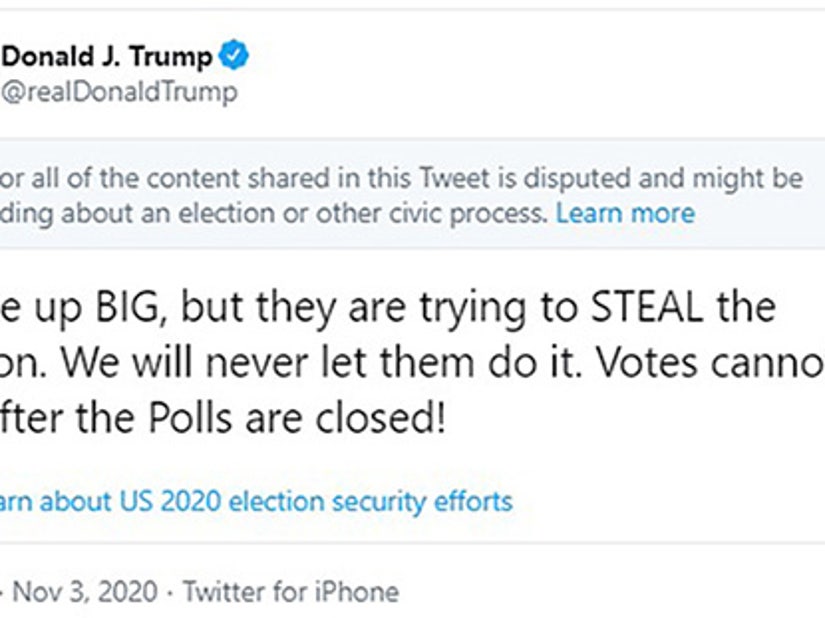 The president then alleged that an unidentified "they are trying to STEAL the election," reiterating his talking point that "votes cannot be cast after the Poles [sic] are closed!"

He quickly corrected the spelling of "polls," but Twitter still flagged the tweet as violating its Civic Integrity Policy, containing content that "is disputed and might be misleading about an election or other civic process." He later gave a speech saying, "Frankly, we did win this election" and threatened to go to the Supreme Court to say "We want all voting to stop." That sparked its own wave of backlash from Hollywood.

As more and more people started waking up on Wednesday, they kept hope alive for Biden as key states started to lean blue while more votes were counted. Trump, meanwhile, began tweeting about votes for him starting to "magically disappear as surprise ballot dumps" in Democratic districts were counted.

Wake me up when ALL of the votes are counted. Until then buzz tf off.-respectfully Flyyyrene pic.twitter.com/ru82updbhS

I hope this election teaches us that we can't just rely on an increasingly diverse voting population to automatically skew Democrat.

We need to consciously put money, resources & establishment Dem support behind candidates who reflect that diversity & represent their communities

*Googles “Can you put Xanax in coffee?”

Every single vote in this country matters, will be counted and will matter! It is the emblem of our democracy! I have so much faith in the human spirit! We’ve got this America! Sending EVERYONE A BIG HUG!

It’s called counting ballots you psychopath. You and your enablers prevented the mail ins from being counted until Election Day in these states. We see you. We know you. You’re done. Get off of twitter & shop for prison gowns. Gaslight in your cell. https://t.co/y2ckrVJE3A

Any other new moms up every three hours last night to make milk and think “oh surely there will be an outcome and I will be the first to know heh heh” only to phone scroll to NOTHING? Should’ve watched Selling Sunset

There can be two truths. Biden IS going to win this thing AND America has shown itself to be dangerously racist, pathetic and more willing to vote for hatred than their own lives. But at least we will get to fight another day. #CountAllTheVotes

Kind of terribly sad how close this election was. After this year and especially this summer it should’ve been a landslide. I don’t get it. Truly.

The fool was still running?!

If Biden loses by any amount Kanye “won” in any of those 12 states, every table will be flipped from here to Michigan.

No table will be safe. I’ll be on a masked, social-distanced table-flipping rampage. You’ve all been warned. https://t.co/hF9Sn99htm

Awoke to strangeness. The problem with mail in votes is they are ghosts. No proof of anything including being alive, being a resident, or being a citizen. Absentee ballots are not mail in votes. But we knew that didn’t we?🤷‍♀️Hope the ghosts don’t win

America is suffering a soul sickness. We have to understand the divisive and violent character of this nation. Repair and Heal the genocide and slavery that we are also founded upon. Give those things their proper place and honor so that we can become whole. https://t.co/Q1larRTc7b

Tell me again about Black voters being the problem.

Write another think piece about it.

That 53—now FIFTY-FIVE percent of Karen’s never disappoint. They choose, racism, white supremacy & misogyny over their own interests (and yours) every single time. https://t.co/iAQP9Wes4e

Told you all. Just be patient. Relax and #CountEveryVote https://t.co/q9dsiaoP2Q

A razor thin Biden win with a zero legislative mandate and a GOP held majority Senate while Trump made huge gains within both black & Hispanic voting blocks... Democrats go push forward limping and bleeding with a huge warning about the voters they are repelling from the party.

Thanks to everyone who worked the pole tonight.

The fact that it's so close though? Smh, it just shows you how much divisiveness is in this country which is petrifying. Totally incredulous that we're here 😳

No matter the outcome, that this election was a referendum on Donald Trump & his Presidency and it’s somehow too close to call at this point says so much more about the state of our country & moral compass of our countrymen than it does our electoral system. #Election2020

That's not how this works. In a democracy we #COUNTEVERYVOTE because #everyvotecounts.

Get your mind off Magic City strippers and focus on the plague that has killed 230,000 Americans. I can’t wait for the final vote count to come in and we send him packing. #BidenHarris2020 #KeepTheFaith pic.twitter.com/AZmE1ImGKG

Hang tough all! This is the #RedMirage it’s about to “turn the corner” into a #BlueWall. Take a breath and get centered in yourself for the next coming days. #CountEveryVote https://t.co/FbrDyRyvjC

Whatever happens, the next four years can't be as bad as that four-year study abroad I did in Italy, right?

We are all a mess of anxiety right now but at least we can celebrate this incredible news 🙌🏻 https://t.co/MlUMCnXfEF

Sad to realize so many people are ok with his behavior and for what he represents. Especially when his policies don't help them financially AT ALL. https://t.co/SSzwoIaPAa

ARIZONA! That's big! Now we gotta get that weird NE-02 thing, whatever that is!

I have to go to sleep I really do. I’m hoping to wake up with a new president named Donald😘😘😘 take the wheel!

Peeps! Just remember that we will likely NOT know the results tonight. There are so many absentee ballots to count this year, and due to the GOP suing to stop them being counted early, it’ll take days to get through them. Breathe. Be patient. Steady yourself for the week ahead.

I just don’t understand how all of the racist, homophobic, immoral, transphobic, misogynistic things Trump has said and stood for wasn’t a deal breaker for this many Americans.

South Carolina. Oh man. What can I even say to y’all? That you can look at #LindseyGraham in all of his pathetic, boot-licking hypocrisy and still vote for him over @harrisonjaime makes me seriously question my faith in humanity. 😔#Election2020

What time is it? It feels like a million o'clock

One of the benefits of Election Day is the heat map of states you get letting people of colour know where not to vacation.

This is far from over. But it’s going to be close.
That in itself is horrible diagnosis.

fact this is close is an utterly damning portrait of decadence & decay : these aren’t votes for policies or ideologies -
They are votes for a man who’s mentally ill & killing people in a pandemic & a child abducting rapist & rascist - soul of USA is deathly sick
Win & heal

It’s insane what *our* fears are if we lose, compared to their fears if Biden wins. like we will prob all die or be handmaids and they’re worried about bathroom safety

Just ordered an incredible amount of food because I’m an emotional eater and I’m scared.

This is like being awake during your own surgery.

Just to remind you all, there is going to be a red shift in the swing states in the south (from looking blue to looking red) and the opposite in the upper Midwest (from red to blue.) This is because of how mail in ballots are counted. So don't freak out! Or do! I don't know!

I don’t know what to do so I’m just posting this again. pic.twitter.com/ilWwgecaSR

The biggest, warmest “thank you” to every person out there fighting so hard to finally end this national nightmare. You’re the heroes we needed and you came out in droves. 👏🏻 🙌🏻 Love you!

My 1st cup of tequila just evaporated. Like, where did it go?

.@NicolleDWallace on @MSNBC just called #NorthCarolina a "side show" and she can officially kiss my ass!

Take a few deep breaths. Walk around the block — unless you’re in line, then stay in line! — Call a best friend.

Take care of yourself amidst the intensity.

I’ve prayed a lot in my life but outside of the 2008 election, I’ve never prayed this hard!!

It’s like we are watching a championship game but the scoreboard is broken and just keeps putting up random numbers.

Florida, you never cease to amaze me with your desire to vote against your own interests. https://t.co/7Jmrjzt6R3

Why do they make that scary noise and then say “too early to call?!?” STAHP!

Thanx Kentucky... you failed us. pic.twitter.com/bhaOqrPPTP

Everyone who voted for this human vomit I wish upon you daily all day diarrhea for the rest of your miserable life https://t.co/pLaR8pxbZI

I’ve bit my fingers to their knuckles

y'all... i'm gonna smoke some cigarettes tonight. i do it once every few years. dont @ me. i'm just using twitter as a jewish confessional.

I just want Wolf Blitzer to cradle me like a baby and whisper friendly exit poll numbers in my ear.

CNN’s election coverage being presented by the Calm app might be the funniest thing that has ever happened.

Indiana has always sucked. I’m sorry, but it’s the worst state in the Midwest.

Ohio, Michigan, Minnesota, Illinois, Wisconsin… All great in their own ways. Indiana has nothing to offer.

I’m sad to see so many #latins voting #trump I mean the Cuban pop alone. It’s ridiculous this is the man that is putting a wall up! Think he’s using you!!

May your anxiety be low. Your wine stock full. And may ALL of the votes be counted... even if it takes a few days. #vote #election2020 https://t.co/Dfad5DKUUF