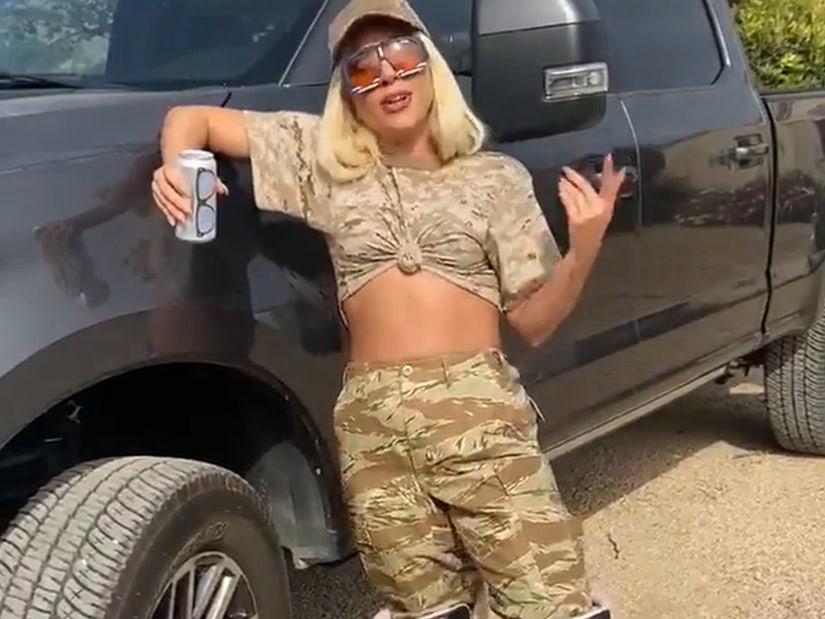 The singer also spoke about her broken engagement to Taylor Kinney during her performance at the Biden rally.

Lady Gaga clapped back at critics who claimed she was mocking rural Americans in swing states during a video she posted supporting Joe Biden.

Over the weekend, the pop icon shared a clip where she wore a camouflage ensemble while holding a beer and leaning on a big pickup truck. "Hey, this is Lady Gaga, I'm voting for America, which means I'm voting for Joe Biden," she announced. "And if you live in Minnesota, Pennsylvania, Georgia, Michigan, Florida or Arizona, I encourage you to vote. And if you have a friend who lives there, tell them to vote."

The "Bad Romance" singer then took a swig from the beer and slammed the rest on the ground, adding, "Cheers to the 2020 election."

"Stunts like this, are exactly why Trump is going to win. Average, hardworking Americans are sick of 'celebrities' mocking them for what they wear, drive, eat, drink, and where they choose to work or live," replied one Twitter follower, as another posted, "Gross. Makes me want to vote for whoever you hate."

On Monday, Gaga joined Biden on his campaign trail at Heinz Field in Pittsburgh, Pennsylvania and addressed the backlash before she performed a song.

"I put some country clothes on the other day and said I was voting for Joe because I wear Cabela's [hunting gear] when I'm on a four-wheeler in Pennsylvania," she said to the audience. "And I will not be told what I can and cannot wear to endorse our future president."

Stunts like this, are exactly why Trump is going to win. Average, hardworking Americans are sick of “celebrities” mocking them for what they wear, drive, eat, drink, and where they choose to work or live. 🖕🏻

"So this is what I have to say about that -- I may not always look like you. But I am you. We are each other."

During her performance, Gaga also touched upon her former engagement to actor Taylor Kinney, who hails from Pennsylvania.

"I was engaged to a man from Lancaster, Pennsylvania," the Oscar winner began. "I know, I know, it didn't work out."

Gaga then launched into a version of her hit "You and I" with a few lyrics changed to show her support for Biden, including "Something about my cool Pennsylvania guy," and "There's something about, Joe, you and I."

The actress met Kinney back in 2011 and they dated for five years before getting engaged. After a year, they called it off, with Gaga confirming the breakup on Instagram.

"Taylor and I have always believed we are soulmates," she shared. "Just like all couples we have ups and downs, and we have been taking a break."

"We are both ambitious artists, hoping to work through long-distance and complicated schedules to continue the simple love we have always shared," she added. "Please root us on. We're just like everybody else and we really love each other."