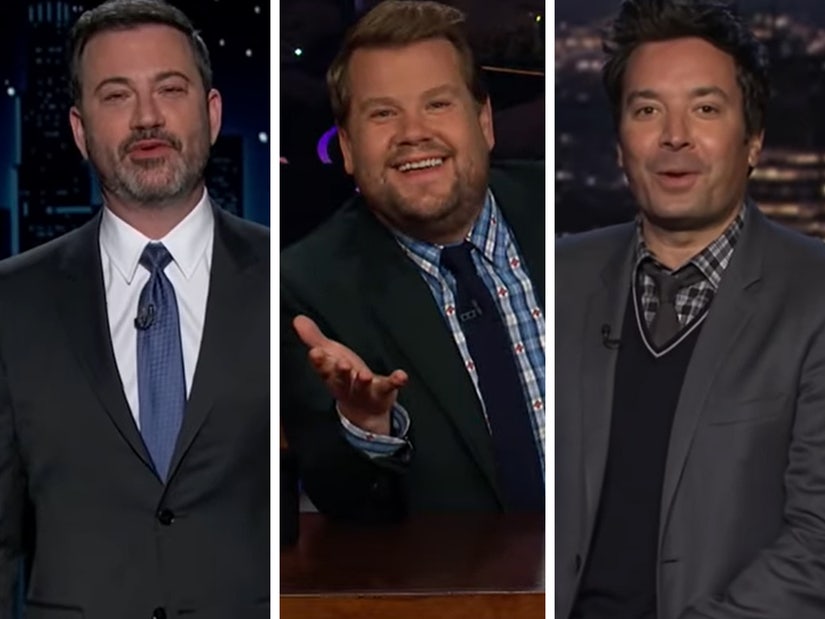 While we still don't have a final decision in the 2020 Presidential Election, there was still plenty for late night hosts to talk about on Wednesday as the counting slowly continued.

The biggest topic of the night was Donald Trump declaring an early victory in the race late Tuesday, as well as the president "claiming" wins in states where votes were still very much being -- and continue to be as of now -- counted.

"If they hadn't canceled the Olympics this year, he would have won that too," joked Jimmy Kimmel. "Basically his message last night, in a nutshell, was we won a completely fraudulent election. Stop counting the votes in the states where I'm ahead."

"He's claiming the votes in four states he didn't win. You can't claim the votes," Kimmel continued. "It's not baggage at an airport carousel."

Kimmel also joked the race was "closer than Donald and Ivanka at a father-daughter dance" -- and said it was "unimaginable" it was such a tight competition.

"If Joe Biden stopped by my house to key my car and pee in my pool," he added, "still be no question which one of them I'd vote for, none."

Over on The Tonight Show Starring Jimmy Fallon, the host joked that Wednesday felt like "waking up with a hangover and realizing you're still at the bar."

Of Trump's "victory" speech, he said, "If you're keeping track, in the same speech, Trump said the election was a fraud and embarrassment and declared victory. I don't think we should correct Trump, nod along, put him in a fake White House and let him spend the next four years thinking he's in charge."

He also slammed Trump for saying votes were magically being "found" for Biden, telling his viewers, "they're not finding votes, they're counting them, because nobody wanted to leave the house, because there's a pandemic."

Like Kimmel, Fallon also expressed shock over the closeness of the race.

"Apparently, a lot of voters looked at 90,000 COVID cases a day and thought, 'I can do 4 more years of this,'" he added. "Apparently, people are voting on which candidate they want to drink bleach with."

Stephen Colbert said Trump's campaign declaring a victory in Pennsylvania was a "move that just reeks of desperate and cheap cologne."

He then mocked POTUS' tweets claiming additional states by making his own declaration. "Gosh I hope this announcement doesn't overshadow me declaring myself People's Sexiest Man Alive," he joked.

Colbert also told Trump that ballots weren't being found, they were being counted.

"Plus, the President of the United States can't ask for voting to stop," he added. "He's only the president because of voting! That's like Arby's changing its slogan to, 'We Must Stop the Meats.'"

James Corden began his show by joking nobody was probably watching it in the first place.

"No one's watching MSNBC and saying, 'We should pop over and see what James Corden's about to say,'" he cracked. "I think less of CBS for having this show on the air right now."

Of Trump's "victory" call, he said the country was actually "shocked" by the president's actions because, "In a completely unexpected turn of events, Donald Trump did exactly what he said he was going to do."

Like Colbert, Corden made a few declarations of his own -- saying there were "a couple of Emmys" he would "love to claim," before giving Reggie Watts a Grammy and the rest of the band Oscars.

"You can't just go to the Supreme Court and ask them to stop counting, that's not a thing," he said. "Trump talks like he's gonna walk down the street and knock on the door."

He also commented on the Trump campaign reportedly going to war with Fox News after the network was the first to call Arizona for Biden.

"You know Trump is in bad shape when he's fighting with Fox News, an entire network dedicated to repeating everything he says," he joked. "That's like the Kardashians fighting with E!, I'm told."

Trevor Noah said Trump's lack of understanding over how tabulation works was "just a level of stupidity I did not expect" from the president. "It feels like Trump is an actual toddler," he added.

"I know everyone was expecting it, but still, can we take a moment to admit it is insane that an American president is demanding they stop counting votes when they're ahead," he continued.

"I never thought of the day someone yelling at me to go back to Africa sounds more like concern for my rights instead of a threat," he went on, before telling the country to "be careful."

"If you let Trump do this, then voting could soon become one of those things that people do to feel better but doesn't do anything, like taking CBD oil or recycling plastic."