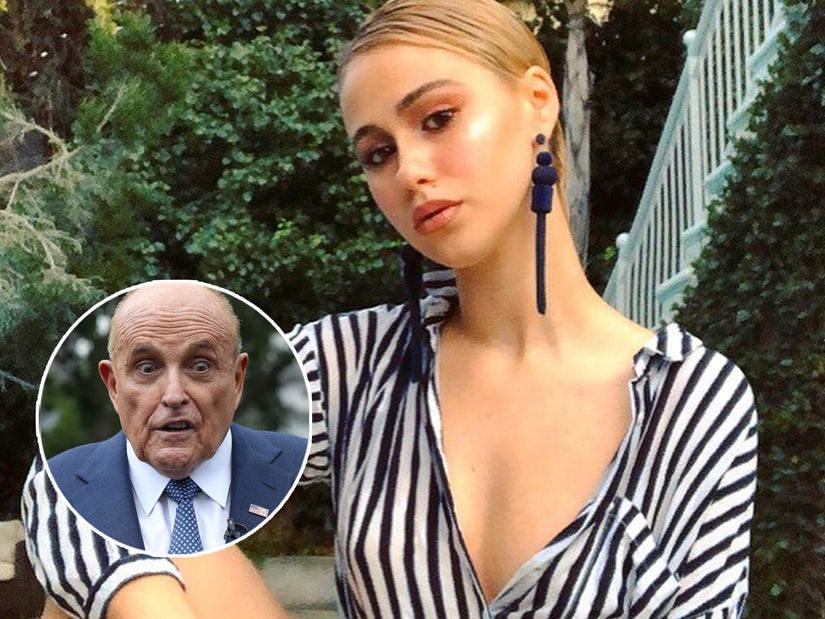 "I don't know how things were going to go."

In the sequel, Bakalova plays Borat's (Sacha Baron Cohen) 15-year-old daughter, Tutar, who ends up interviewing the former New York mayor alone in a hotel room, where he appears to put his hands inside his pants before Borat ambushes the scene.

"Sacha jumped into the room quickly, because he's been worried about me," the 24-year-old Bulgarian actress told The New York Times. "So, if he were late, I don't know how things were going to go. But he came just in time."

As she was initially the only person in the room with Giuliani, Bakalova was pressed by the Times for her take on what was transpiring.

"What do you think he was doing?" she replied. "I saw everything that you saw. If you saw the movie, that's our message. We want everybody to see the movie and judge for themselves."

Since the movie's premiere, Giuliani has claimed he was leaning back on the hotel bed to tuck in his shirt after Tutar removed his microphone.

"At no time before, during, or after the interview was I ever inappropriate," he tweeted. "If Sacha Baron Cohen implies otherwise he is a stone-cold liar."

When asked if she thought Giuliani believed Tutar to be 15, Bakalova said she's "not sure what he knows or does not know" before filming because she was not the one booking him for the scene.

And although the actress knew of Giuliani beforehand "because 9/11 is something everybody should know," it didn't make it any less stressful for her.

"Yeah. I was nervous," she explained. "My heart was racing. But Sacha was like, you should be nervous in this situation. So use your nerves. Convert them and accept them and they're going to help you through everything."

The fact that Giuliani called the police at the end of the scene unnerved her as well, as she revealed, "I was kind of scared that something would happen. But fortunately, we escaped."

Bakalova went on to say how Baron Cohen, whom she refers to as her "nonbiological father," attempted to make her feel safe at all times during filming.

"We'd been talking a lot about different scenarios," she said. "How should I act, this way or this way? What should I do? What is smarter? But in all of the scenarios, I was confident that Sacha will save me and he will save the scene, so it's not going to be a disaster. He's my guardian angel."

As for Giuliani being widely ridiculed for the prank, Bakalova has no remorse.

"Movies like this are showing people's true colors," she argued. "It's going to show Rudy's real character. You're responsible for your own decisions. So, no, I don't feel bad."