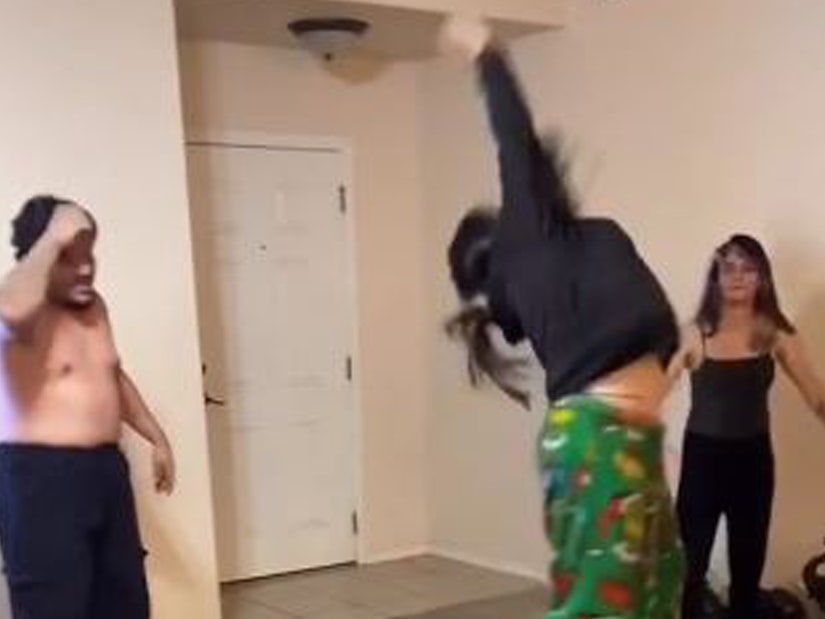 "Drunk me thought she could do a backflip 🤣💀" posted the would-be gymnast.

Quarantining can cause some people to go a little stir crazy, especially when you add alcohol to the equation.

For one social media fan, the combination proved delightfully hilarious, as she showcased her gymnastic prowess in an attempt to do a backflip in a living room while her two siblings watched with buzzy anticipation.

In the short clip that has over 8 million views, TikTok user wild_rubez, dressed in a sweatshirt and Grinch pajama bottoms, prepares the audience for her awesome acrobatics by shouting, "Want some s--t!"

After crouching low, she throws her body up in the air with arms outstretched, twists and suddenly falls on her face, sticking the landing. The family can't contain themselves as they double over with laughter.

In a follow up video, wild_rubez thanked her viewers for their concern about her well-being, and revealed the stunt did bang her up a bit, but she will fully recover.

"I definitely felt it the next day," she said with a laugh. "It went away after a while, but I just have a little bruise on my left arm and a little swelling part on my lower part of the hip. But I'm ok."

She went on to explain that the daring display was fueled by her "boo" requesting the three revelers try backflips and cartwheels in a birthday tribute for her mother, who happened to be filming the spectacle.

"It was definitely fun making, but I probably won't do it again cause it really hurt," she said, before rethinking the claim and adding, "I might try it again, cause my sister's birthday is coming up. So we'll see what will happen."

And watch the slow-motion version of the fabulous fail, below!