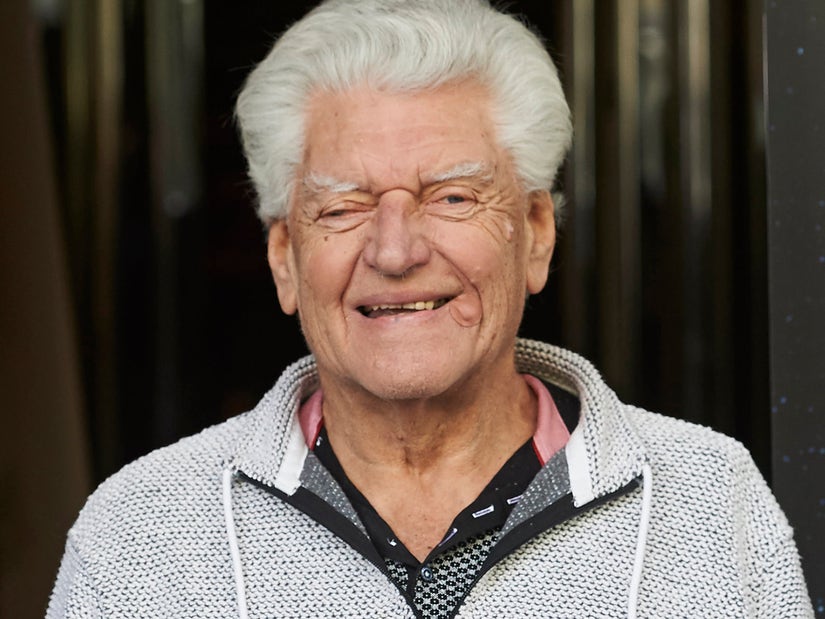 As a kid Dave Prowse couldn’t be more famous to me; stalking along corridors as evil incarnate in the part of Darth Vader & stopping a whole generation of kiddies from being mown down in street as the Green Cross Code man. Rest in Peace, Bristol’s finest. https://t.co/VYdxM37JWb

The towering 6'6" actor always considered it an honor to portray the "ultimate screen villain of all time."

British actor David Prowse, best known as the towering physical presence of Darth Vader in the original "Star Wars" trilogy, has died after an illness. He was 85.

It's taken many actors to portray one of cinema's most frightening villains, but the first that anyone saw was British actor David Prowse. The weight lifter and bodybuilder's massive 6'6" frame would come to dominate the film franchise, and the imaginations of fans for decades.

One of the biggest media franchises of all time, "Star Wars" loom as large over pop culture as Prowse's Darth Vader did over Carrie Fisher's Princess Leia in the 1977 original film that launched a literal empire.

It's with great regret and heart-wrenching sadness for us and million of fans around the world, to announce that our client DAVE PROWSE M.B.E. has passed away at the age of 85. #DaveProwse @starwars #DarthVader #GreenCrossCodeMan #iconic #actor #bodybuilder #MBE pic.twitter.com/dL2RmdIqg8

Prowse initially auditioned for both Vader and Chewbacca, telling the BBC in 2016 that he wanted to portray Darth Vader because "you always remember the villain," per TMZ. He was certainly right in this case.

Due to Prowse's strong British accent, George Lucas ultimately decided to dub over his lines with the iconic voice of James Earl Jones, creating an instantly classic dual performance. Prowse has said it was a "great honor" to portray the "ultimate screen villain of all time."

Since that first film, Vader's story has expanded as fans learned his original identity as Anakin Skywalker, then further exploring his storyline in the prequel trilogy and the impact of his dark legacy in the just-concluded sequel trilogy.

Franchise stars, fans and other Hollywood notables took to social media, quickly getting Prowse's most iconic film character trending on Twitter, to mourn his passing and celebrate his incredible legacy.

"So sad to hear David Prowse has passed," wrote Mark Hamill. "He was a kind man & much more than Darth Vader," he continued, listing off several of Prowse's impressive professional and persona achievements, including his iconic work in the UK as the Green Cross Code Man.

Citing one of those achievements, Stanely Kubrick shared a picture of Prowse from the set of "A Clockwork Orange," along with a quote from Prowse about how much the role meant to him and his career.

Carl Weathers was also among the first "Star Wars" stars to honor Prowse's passing as fans are waking up to the sad news on Sunday morning. We'll update with more reactions as the day progresses.

So sad to hear David Prowse has passed. He was a kind man & much more than Darth Vader. Actor-Husband-Father-Member of the Order of the British Empire-3 time British Weightlifting Champion & Safety Icon the Green Cross Code Man. He loved his fans as much as they loved him. #RIP pic.twitter.com/VbDrGu6iBz

“I’d worked in A Clockwork Orange with Stanley Kubrick and, since Stanley was such a prestigious director, this opened up all sorts of doors for me.” David Prowse, 1 July, 1935 - 28 November, 2020. pic.twitter.com/QdI2gxUJjY

RIP Dave Prowse. I hope you’re up there sharing a pint and a story with the boys. #DarthVader #DaveProwse #RIPDaveProwse #StarWars pic.twitter.com/XoUtq2YihW

Sad to hear of the passing of a #StarWars family member. RIP Dave Prowse. Darth Vader wouldn't be the same without you in the costume. We had many fun times & laughs at cons together over the years. Glad to have been able to call you a friend. Rest now and be one with the Force! pic.twitter.com/st28CQGckF

Saddened to wake up to the news that my Twitter friend David Prowse passed away. David, a literal giant among men, played many roles in his career. His most famous role was being the misunderstood father who tried to give the universe to his very disobedient twins. #DarthVader

R.I.P. #DaveProwse. We will miss your kind presence on the convention circuit 🖖🏾 https://t.co/MSmiSD9DMA

May the force be with you, David Prowse.

This will be a thread of tribute to #DavidProwse, who was the physical form of #DarthVader. We all have celebrated the brilliance of @jamesearljones’ vocal performance as Vader—& rightfully so ❤️—but we must never forget the physical swag Mr. Prowse brought to the role. #Respect! https://t.co/YJwAnk1X6A

David Prowse as Darth Vader was BRILLIANT. He was so unbelievably magical in that suit. I’ve watched Empire so many times with the sound off just to watch how he moved. His physical choices were as iconic as James’ voice to me & aside from all of that he was such a nice man. RIP pic.twitter.com/8OXI7DFdWZ

I met Dave Prowse a few years ago, he came up to my booth at a con, he wanted to buy my Star Wars posters. I insisted that they were a gift. He was so gracious and we had a lovely chat. He was still asking to pay me for them as he left, I think I said “Darth Vader doesn’t pay.” pic.twitter.com/kzsG0STlKD

We have just learned of the passing of David Prowse, the man behind Darth Vader's mask.

David embodied cinema's greatest villain. It is with great sadness the 501st Legion hears he has become one with the Force. #VadersFist #DarthVader #StarWars #HonoraryMember #BucketsOff pic.twitter.com/dhd95hyTnP

Sad to learn about the passing of David Prowse. @starwars was such a gigantic part of my childhood, all the actors were heroes to me. From Porkins to Vader. All heroes. Rest in power, Lord Vader. “David Prowse IS Darth Vader!” pic.twitter.com/C04nECTELl

Dave Prowse, the original Darth Vader has passed away. One night at a convention bar, Mike Perkins and I got to talk with him for a bit. We figured everyone was always asking him about Star Wars, so we asked him about his time as Green Cross Code Man. Which he was very proud of. pic.twitter.com/mxf9GXjdMU

David Prowse both terrified and saved a generation of kids, as Darth Vader and the Green Cross Code man. He is indelibly inked in my earliest memories. RIP. pic.twitter.com/7aSG1OQYUk

David Prowse was Darth Vader's presence, his gait, his life. JEJ may have been his voice, Sebastian Shaw his face, and Hayden Christiansen his youth, but the man in the suit that struck fear in our hearts at the beginning of the saga is all Mr. Prowse. pic.twitter.com/U26NDiHk22

RIP David Prowse😢 I know Darth Vader is largely remembered for the iconic voice work done by James Earl Jones...but so much of Vader was also his horrifyingly intimidating physicality. Thank you Mr. Prowse, for bringing to life the greatest villain of all time🙏🏼❤️ pic.twitter.com/fdHwQ6n39i

“When I left you, I was but the learner. Now I am the master.” -Darth Vader

May the force be with you, always. pic.twitter.com/0cqhDI6PwF

While James Earl Jones gave Darth Vader an intimidating voice, David Prowse gave the physique that made Lord Vader the most intimidating villain in cinematic history! Especially in this particular scene from the first movie! RIP Darth Vader! 😔 pic.twitter.com/jAf0WvPVfk

The Empire Strikes Back; No, I am your father

One of the most iconic moments in movie history that really blew my mind as a kid; in special memory of David Prowse / Darth Vader. RIP pic.twitter.com/sbzMs0cN9R