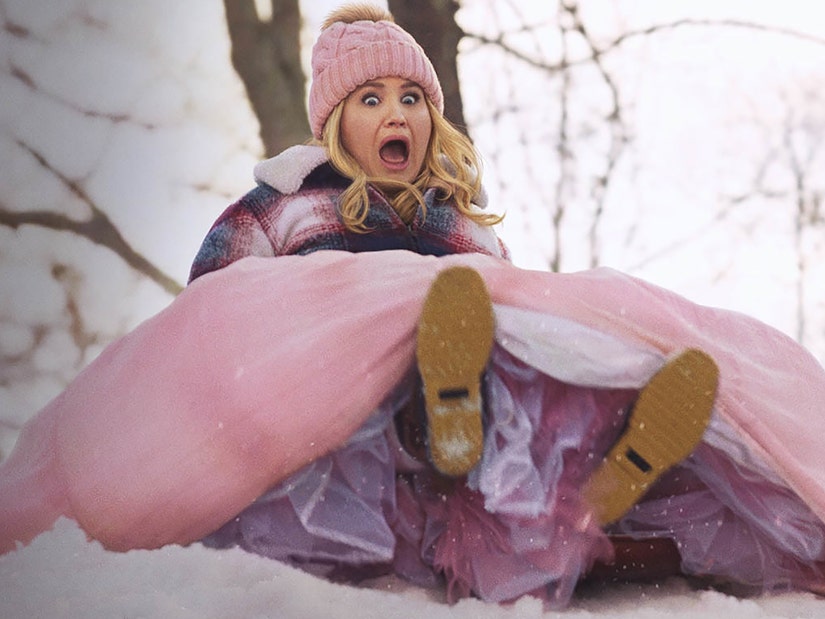 The actress also talks about her godmother transformation -- and shares her idea for a sequel.

Disney+ is dropping some new Christmas content this week with its original film, "Godmothered."

The movie stars Jillian Bell as Eleanor, a fairy godmother-in-training who goes rogue and tries to help 40-year-old single mother Mackenzie (Isla Fisher) get her own "happily ever after." Venturing out of her homeland for the real world for the first time, Eleanor is the ultimate fish out of water -- and someone who sticks out even more thanks to her fairy tale couture and all-around ignorance to anything current. 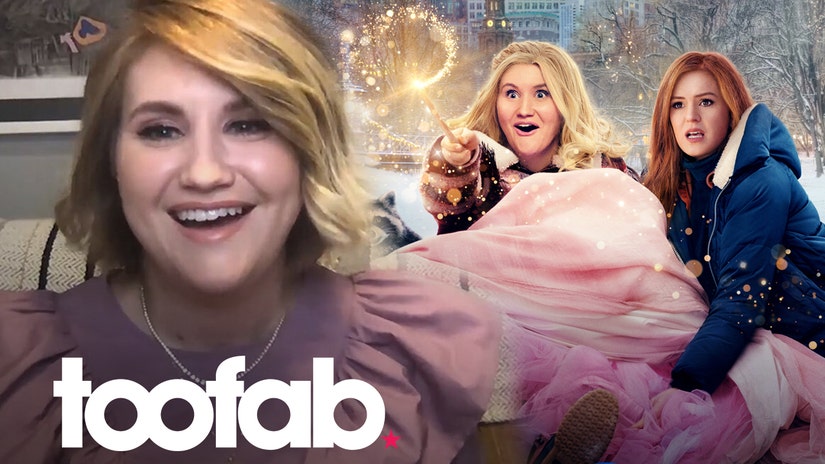 TooFab caught up with Bell ahead of the film's release, where she talked about playing the rare Disney character who's allowed to get tanked on screen, which character she'd personally love to get drunk with, how her idea of "Happily Ever After" has changed overtime and what she would love to see in a sequel.

What does it mean to you to be headlining a Disney film?

It's been absolutely crazy. I think on every actor's checklist is getting to do anything for a Disney movie. You always assume too that it would be something with animation, but to be a live-action Disney movie is such a ... it's a big one. That's a big one for anybody who grew up watching Disney movies. I loved them as a kid. I was a huge fan of "The Little Mermaid," "Pinocchio," and "Sleeping Beauty," so to get to do this is a true dream come true.

What was your "happily ever after" as a kid -- and when did you realize it was changing?

What's funny is I had very mature dreams as a kid. For me, I always wanted to move to New York and be on SNL. I grew up loving the show and I love sketch comedy so much and I did Groundlings out here in LA. I actually, the first time going to New York was auditioning for SNL. So, it actually happened. The dream came true, and I worked there for a year as a writer, and then I kind of had this moment of what, not to be cheesy, but what is next? I realized that it just can't be about work, because work's gonna come and go. So, for me it's more like who do I want to be, and who do I want to spend my time with, and what do I want to spend my time doing? And it doesn't just mean work, although sometimes it is. I do like to write a lot, so that brings me joy.

You get to put on this big fairy godmother dress. What does that feel like and does it take some getting used to?

Yeah, obviously very different from my normal life, but the costume designer was incredible and she was building it while it was on me. We had a meeting with the director, Sharon Maguire, and someone would have a suggestion and we were adding a flower, and then taking it off, just kind of concocting it in front of me and I was just watching it like they were truly their own version of fairy godmothers here.

And the first day that I was on set shooting, I remember that we were in a hotel room waiting to go down to shoot and Jillian Shea Spaeder and Willa Skye, who played the two young ladies in the movie. They saw me in the dress and Willa's eyes, she was like a cartoon character. They just like popped out of her little head and Jillian just dropped her jaw to the ground and I have a picture of it. I happened to say, 'Oh, the kids are coming in. Maybe I'll take a picture of what they look like coming in.' I'm so glad that I did. It's such a great memory.

At one point in the movie, Mackenzie says people want to laugh and hope to see the magic in the world -- and I think that's especially true now. How does it feel to be a part of project giving joy right now?

It means everything. I think it's what we hope to do as entertainers, is to truly entertain people. And that means during some of the best times and it means some of the harder times. And we're in a hard time right now. It's been difficult not being able to see some family members, see friends, hug someone, do a handshake. I think more now than ever people need films like this. It's so light hearted and fun, and it's got some jokes that go over kids heads so it's fun for adults, and then some that are purely meant for kids or help us see the little kids in us. It makes me feel like a kid when I watch this film.

And having it drop on VOD is also a blessing.

Yeah, it's important so people can actually watch these films. I, like everyone else, love going to the theaters to watch movies, but I was so excited that this was on Disney+ because so many people have it and it reaches more homes. Especially now that people are like, 'Okay, we've watched all of the movies that are out there. Give us some more!' We're hoping that this will be that movie for people.

There's this joke in the movie that fairy godmothers themselves don't sing, but you actually get to in the film. What was it like to find out that you'd be singing in the film?

I was excited because I lived with my sister and her fiancé and they would tell you if they were here, I love singing, I do it way too much, and I'm not a great singer. I didn't have to pull from too much for that poorly-sung version of The Sound of Music's famous song, but I was excited that we were going to be singing in like a major town square that no one could tell me to stop.

We also loved the scene where your character, Eleanor, gets tanked at a bar, just throwing back shots and not something you often see in a Disney movie.

I think because she's so naive that we can get away with a couple of little things that maybe kids won't notice. I did believe that was hysterical that they had that scene put in there and Artemis, who's playing pool with me, it’s just her reactions ...  I was texting her earlier, 'Your natural reaction to Eleanor, it was so funny to me.'

If you could get drunk with any Disney character who would it be?

So many to choose from, that's a really tough one. I would probably say … oh what's the grandmother's name in Moana? Either that or -- although I'm a dog lover so this is crazy to pick -- Cruella. I would love to know some stories Cruella has, besides the dog stories. I don't want to hear anything bad about a dog, but I feel like she was a little wild cat in her days.

Disney is no stranger to sequels, where do you think this series could go?

I mean, I think it would be fun if it was about Willa Skye's character, the littlest one in the movie. She has just such a funny personality. Sometimes she'll crack jokes and I'm like, 'You are an 80-year-old lounge singer doing a bit.' She is so funny to me, and there's so much to explore there, that I almost wish I'm coming back to help her in some way. I would love to continue on with the Walsh family, but maybe for her.

Last question. What are your holiday go-to movies? We've thrown "The Night Before" into the rotation, love that movie.

I love Christmas movies and I was so excited to be a part of that one. I mean Seth Rogen is the funniest person on the planet.

We do like a big Christmas brunch usually. And we invite anybody in who usually doesn't have a place to go back to. This year is going to be different, of course, it's just going to be my family, but we love a big brunch with a lot of carbs. And then we usually watch some kind of a movie. Something fun that's out, either a new or we'll watch "Home Alone," or "Love Actually," some good old classics.