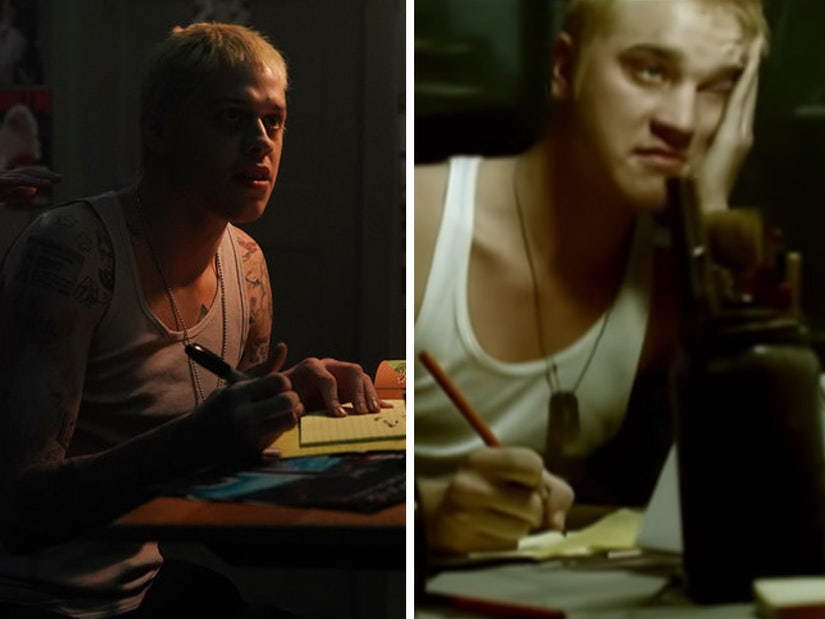 Eminem himself even made a cameo in the hilarious spoof.

OG "Stan" Devon Sawa won't be writing any angry messages to "Saturday Night Live" after they parodied the 2000 Eminem video in which he starred.

In the original, Sawa played a fan who became obsessed with the rapper, eventually killing himself and his girlfriend to try and catch Em's attention after he wouldn't respond to his letters.

"Getting this present this is the only thing keeping me alive, Dear Santa Claus, please being me a PS5," begged Stu at the beginning of the viral clip.

When that didn't seem to work, the threats came next. "If you can't help your biggest fan, you should just retire. Or next time you slide down my chimney, I'll set you ass on fire," he rapped.

After getting a tattoo of Santa's name across his chest and coming to the realization his gaming console wasn't coming, Stu was pushed over the edge.

"I guess even the great St. Nick can't even track down a PS5. Hey Santa, drank a fifth of egg nog, dare me to drive?" he bragged, after throwing back a carton of the holiday beverage.

Following an appearance from Bowen Yang as Elton John, Santa finally wrote back, telling Stu he had the wrong address -- before giving the real Eminem a PS5 instead. Cur Eminem: "Sorry Stu, you f--ked up."

Sawa, who played the titular fan in the 2000 video, shared his appreciation for the video on Twitter after it aired.

In a series of tweets, he shared a side-by-side of him and Davidson's characters with a laughing emoji, told Eminem's manager the show "nailed it," joked Stu was better than Stan and shared a fan poll asking "Who wore it better" for their white tank tops. He also re-tweeted Eminem's post about his cameo.

Revisit the original video below: