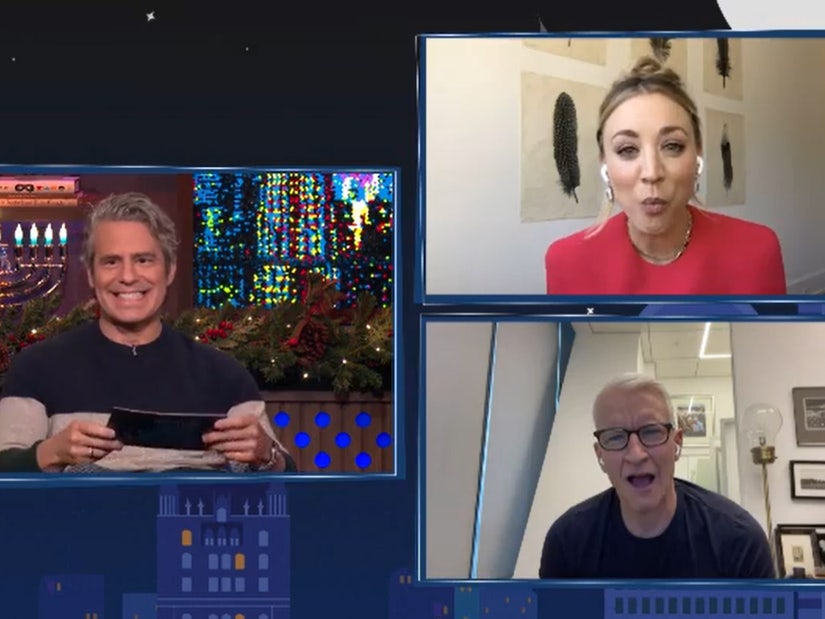 She was also mortified after Andy pulled out some embarrassing photos from her past.

Kaley Cuoco and Anderson Cooper had one very candid conversation with host Andy Cohen when they swung by the "Watch What Happens Live" Clubhouse on Tuesday night.

The "Flight Attendant" star was asked about everything from whether she's ever joined the Mile High Club to her real feelings on Jim Parsons' "Big Bang Theory" exit ending the show -- with Cohen surprising both his guests with some intel about himself in the process.

When asking about the Mile High Club, Cohen told them both he was already in it himself. "Are you?!" exclaimed Cooper, one of Cohen's closest friends. "When?!"

"On a commercial flight to France," Andy replied, telling them both "just don't worry about it" when pressed for further details.

Anderson asked whether Cohen hooked up with a flight attendant, which Andy felt was a fair question, considering the name of Kaley's HBO Max show. He then revealed that, no, it was not.

Speaking of her streaming series, which revolves around Kaley's character winding up in the middle of an international murder investigation after a drunken hookup, Cohen asked whether there's been any talk about a second season.

"I hope so," she revealed. "It was meant to be a miniseries for sure, but we would like to do a Season 2."

When asked whether someone was already working on it, "story-wise," she confirmed that was the case. "Yes, right now," she explained, saying she was "surprised and really touched" by the show's positive reception. "We're prepped, in case we get the call," she added, "We're ready."

Another viewer wanted to know if Cuoco was "disappointed" in former "Big Bang Theory" costar Jim Parsons' decision to leave the show, a move which prompted the incredibly popular series coming to a premature end.

"No, I think that was what he felt was needed for himself at the time," Cuoco diplomatically replied. "And I don't think my life would have taken this path if we hadn't ended when we did, so it's a blessing in disguise. Never know."

Cuoco was also caught off guard when one viewer wondered whether the Man of Steel was "really made of steel," a reference to her extremely short-lived relationship with Superman himself, Henry Cavil, back in 2013. The two were linked for about a week that summer.

During the interview, Cohen also brought out a few embarrassing red carpet looks from Cuoco's past -- most of which left her completely mortified.

Among her exclamations as the images popped up on screen: "I wore that to a Christmas party?!", "How low are my jeans?!" and "I must have ruined the entire red carpet by wearing that."

The group also played a quarantine edition of Never Have I Ever, which you can watch below.