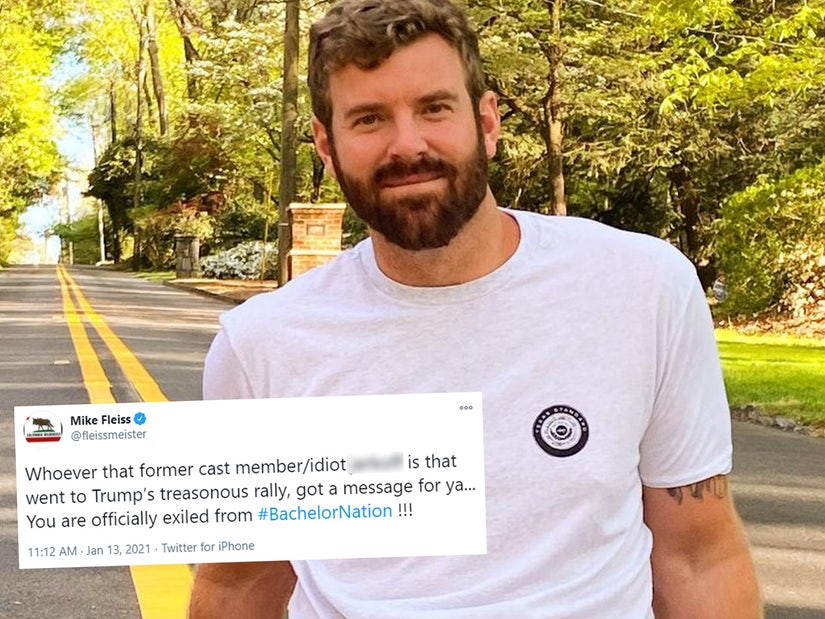 Taylor claimed ABC had his back as he "legally supported" the President in the wake of the Capitol attack.

"The Bachelor" creator Mike Fleiss slammed former cast member, James McCoy Taylor, for claiming ABC backed his support of the President in the wake of the Capitol attack.

On Wednesday, Fleiss tweeted, "Whoever that former cast member/idiot jerkoff is that went to Trump's treasonous rally, got a message for ya … You are officially exiled from #BachelorNation!!!"

"Thanks all for letting me know. @JamesTaylor_com shame on you," he said in a follow-up post.

Meanwhile, Rachel Lindsay weighed in as she retweeted Fleiss' message and wrote, "Reason #4853569536 we have to do better with casting."

Taylor, who competed on JoJo Fletcher's season of "The Bachelorette" in 2016, saw backlash after he took to his own Twitter on Monday to claim his support of Donald Trump was cosigned by the show's network and employees.

"Big thanks to #TheBachelor family for supporting me during this time… from top to bottom. Conservative producers are the best!!" he shared. "Thank you @ABCNetwork, @ABC & @BachelorABC for having my back while I legally supported our President."

Not everyone who was in DC was involved in the riot. Kinda like not everyone who protested this summer were the ones setting fires and attacking federal courthouses. No one should defend violence on any side. Thank you for speaking up for conservatives, James! #texasforever

The tweet came days after a Trump rally in Washington D.C. turned into a horrific attack on the Capitol that left five people dead.

Earlier this week, a source close to ABC told TooFab that Taylor's claims of the network's support were false.

While there has been no confirmation of Taylor being part of the January 6th siege, the singer had announced a day before that he would be attending the Trump rally.

"DC tomorrow #MarchForTrump Take a bus. Drive. MSG me if you need a plane ticket... just don't make an excuse not to fight for a man who's been fighting for you for 4 years," he tweeted. "See y'all there. We're with you, Mr. President @realDonaldTrump RT!!!"

On Tuesday, Taylor appeared to suggest he attended only the rally and not the riot, as he retweeted a post reading, "Not everyone who was in DC was involved in the riot. Kinda like not everyone who protested this summer were the ones setting fires and attacking federal courthouses. No one should defend violence on any side. Thank you for speaking up for conservatives, James! #texasforever."