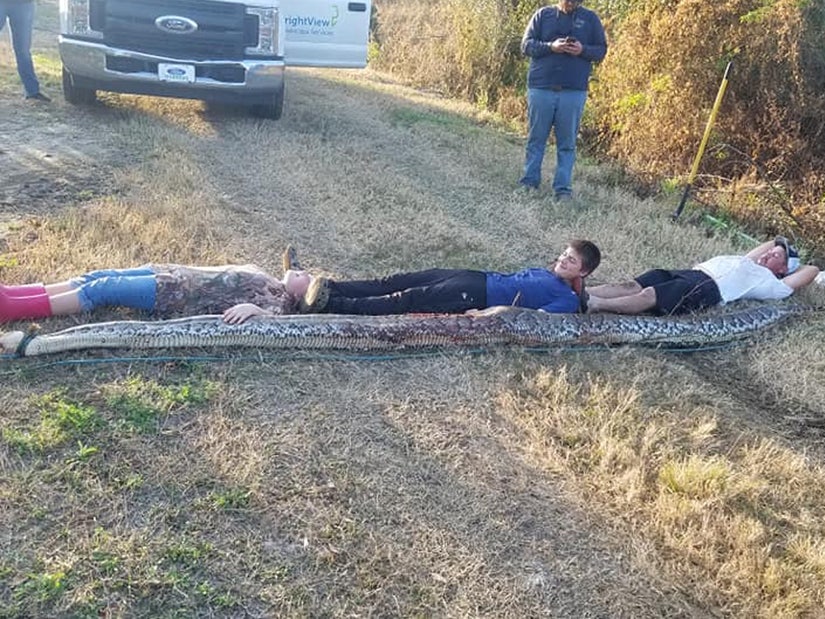 A family in Florida had an unannounced visitor over the weekend: a 16'4" 300lb Burmese python.

Aaron Brown was driving through his property in Zolfo Springs on Sunday when he spotted the monster snake hiding in a pipe.

He told Fox8 he tried to summon family members to help capture it, and understandably, some were more enthusiastic than others.

"I tried to coach my mom to get down there and grab a hold of it, and she wasn't going for that," he said, so recruited his cousin Bobby Wilkinson instead.

"That's the biggest snake I’ve ever seen," Wilkinson said, who shot and killed it.

"We started pulling him out of the culvert, and it just kept getting bigger and bigger, and I was like, 'My God, look at this thing. This is one huge snake'."

"I said I ain't never seen one this big and never thought in my life I would have the opportunity to mess with something this big. This was one of my bucket list things."

The ridiculously-sized reptile even caught the attention of Wilkinson's heroes, the "Guardians of the Glades"; as the snake bounty hunters of the Discovery series came down to retrieve it.

"Ever since the 'Guardian of the Glades' has been on, I always tell my wife I'd love to go down there and catch a snake. Just one time go catch a snake," he added. "Lo and behold, one that was astronomically huge fell in my lap because my cousin spotted it in a ditch." 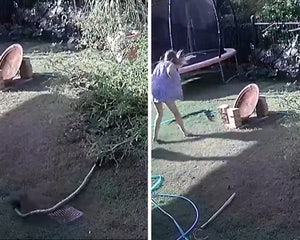 If killing the creature seems cruel, it is actually encouraged by the state authorities.

Burmese pythons are not native but invasive species, and incredibly harmful to the Everglades eco-system; they'll eat everything from small mammals and other reptiles to prey as big as deer and even bobcats.

They managed to take a foothold as a result of escaped or intentionally released pets; with females able to lay up to 100 eggs, in the space of around two decades, there are now estimated to be between 100,000 and 300,000 of them hiding in the Everglades.

With no natural predators — which is hardly surprising when you're 16ft long and weigh 300lbs — the South Florida Water Management District and the Florida Fish and Wildlife Conservation Commission offer bounties for captured and killed pythons.

Bounty hunters earn a set wage, plus a $50 bonus for each python measuring up to four feet, plus $25 more for each foot beyond that; a nesting female can nab a hunter an additional $200, too.

By that count, the cousins earned themselves a tidy $350 for their catch. While very impressive, he wasn't quite a record breaker: in October, one Everglades bounty hunter netted a Burmese python measuring a whopping 18.9 ft.