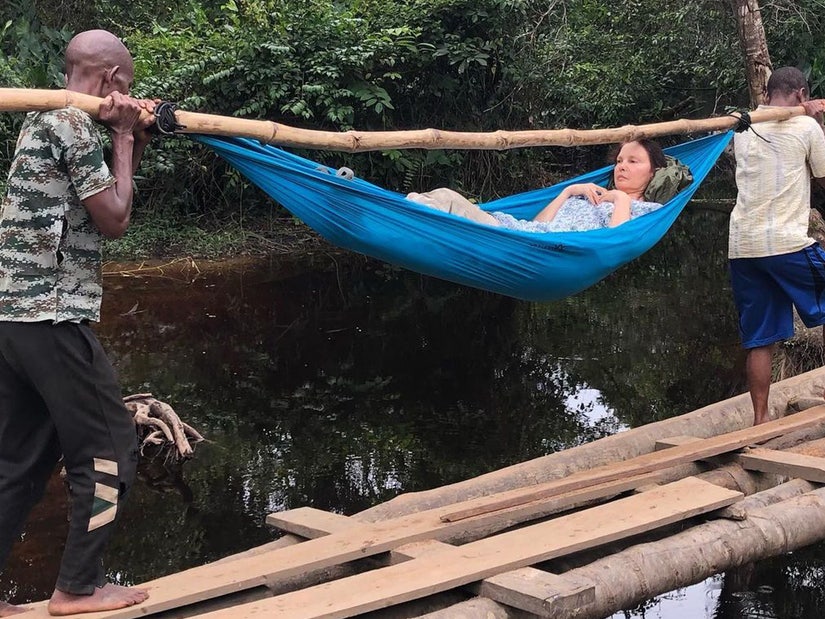 "I will walk again, because I'm determined, and I believe in modern science, and I also believe in miracles."

In a new post shared on Tuesday, Judd detailed how Congolese locals saved her life -- or, at the very least, her leg -- after a nasty accident in the rainforest last week. She also posted a number of photos and videos, detailing her 55-hour journey from the jungle to the ICU trauma unit (below).

"Friends. Without my Congolese brothers and sisters, my internal bleeding would have likely killed me, and I would have lost my leg. I wake up weeping in gratitude, deeply moved by each person who contributed something life giving and spirit salving during my grueling 55 hour odyssey," she began. "Here are some of their stories."

"Dieumerci stretched out his leg and put it under my grossly misshapen left leg to try to keep it still. It was broken in four places and had nerve damage," she wrote. "Dieumerci ('Thanks be to God') remained seated, without fidgeting or flinching, for 5 hours on the rain forest floor. He was with me in my primal pain. He was my witness."

"Papa Jean: it took 5 hours, but eventually he found me, wretched and wild on the ground, and calmly assessed my broken leg," she wrote. "He told me what he had to do. I bit a stick. I held onto Maud. And Papa Jean, with certainty began to manipulate and adjust my broken bones back into something like a position I could be transported in, while I screamed and writhed. How he did that so methodically while I was like an animal is beyond me. He saved me."

"The six men who carefully moved me into the hammock with as little jostling as possible, who then walked for 3 hours over rough terrain carrying me out. Heroes," she continued. "Didier and Maradona: Didier drove the motorbike. I sat facing backwards, his back my backrest. When I would begin to slump, to pass out, he would call to me to re-set my position to lean on him. Maradona rode on the very back of the motorbike, I faced him. He held my broken leg under the heel and I held the shattered top part together with my two hands. Together we did this for 6 hours on an irregular, rutted and pocked dirt road that has gullies for rain run off during the rainy season."

"Maradona was the only person to come forward to volunteer for this task," she added. "We have a nice friendship, discussing the pros and cons of polygamy and monogamy. I show two pictures, one in his hat and one in mine, which he dearly covets! The women! My sisters who held me. They blessed me."

Ashley Judd revealed she is recovering in an ICU trauma unit after shattering her leg during an African rainforest excursion.

In an Instagram Live with New York Times columnist Nicholas Kristof on Friday, the 52-year-old actress detailed the horrific accident, saying she tripped over a fallen tree while on a nighttime trip to research bonobo apes in the Democratic Republic of the Congo.

.@AshleyJudd has been in a bad accident in a remote part of the DR Congo, but she's okay. She's grateful to those who helped her, and focused on the health needs in the area. I'll talk with her about what happened and those needs in a live Instagram chat tomorrow at 9am NY time. pic.twitter.com/wNrlAtYj10

"What was next was an incredibly harrowing 55 hours," she began. "It started with five hours of lying on the forest floor... biting my stick, howling like a wild animal. Knowing that this is the beginning of what's going to take hours."

"I'm going into shock," Ashley recalled. "I'm passing out and all I can do is narrate and say, 'The pain is really bad right now.' My teeth are chattering. I'm in a cold sweat. I think I'm gonna vomit."

After someone "set" her leg, she was then carried "an hour and a half in a hammock."

"By my Congolese brothers, who were doing it barefoot, up and over hills, through the river," she explained.

A motorcyclist then transported Ashley 6 hours away to a hut in the city of Jolu where she spent the night.

"I had to physically hold the top part of my shattered tibia together," she said of the motorcycle ride. "I was at the edge of my very edge."

She was then flown to the capital of Kinshasa and waited another 24 hours before flying to a hospital in South Africa to receive an operation.

The "Double Jeopardy" star went on to say how she "deeply" loves Congo, but it is "not, unfortunately, equipped to deal with massive catastrophic injuries" like she had incurred.

"We're talking about not just a lack of electricity, but a lack of a simple pill to kill the pain when you've shattered a leg in four places and have nerve damage." 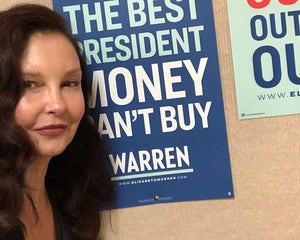 Ashley also highlighted how she was extremely fortunate in the dire situation.

“The difference between a Congolese person and me is disaster insurance that allowed me 55 hours after my accident to get to an operating table in South Africa."

"Of course, I will walk again, because I'm determined, and I believe in modern science, and I also believe in miracles, but there's not really a time frame for when I'm gonna be bipedal," she continued. "I have a journey ahead of me."