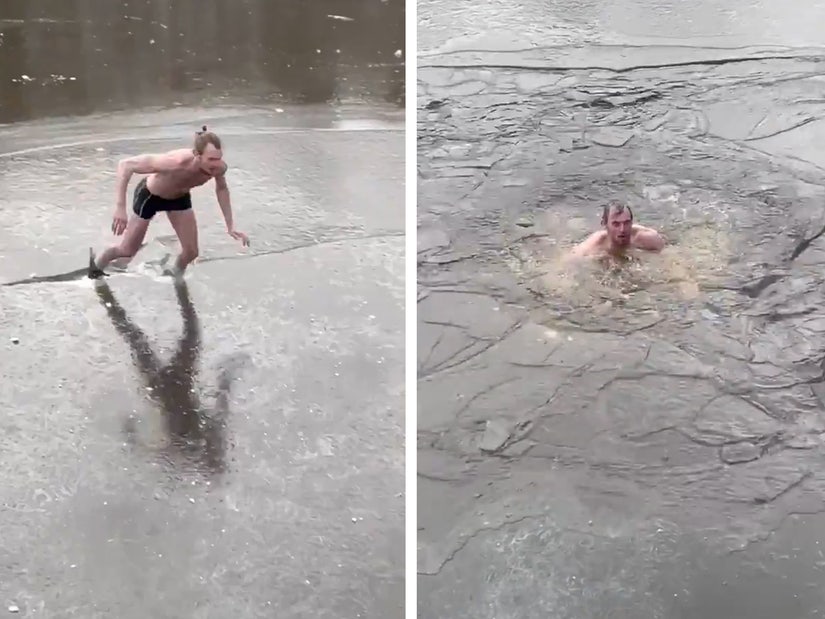 He was definitely skating on thin ice.

An ice skater got a chilly surprise when he took to the frozen, er semi-frozen, canals of Amsterdam to show off his moves.

In a viral clip that has been viewed over 7 million times, a man clad in only tiny shorts is seen skating on the famous canals in front of a large crowd.

The ice suddenly shatters beneath him and he plunges into the freezing waters. Appearing to be unscathed, except perhaps for his pride, the man shouts to the crowd, "Face plant!"

He eventually gets help from a few bystanders, a rope and athleticism as he pulls himself out of the icy trap and gives a bow.

The video was captioned with the hashtag "ijs niet overal goed", or "the ice isn't good everywhere."

The unlucky skater wasn't the only one to find himself skating on thin ice, however, as another video posted by Guardian News showed several skaters being rescued from the canals.

The big skating turnout occurred because the canals froze over for the first time in three years, according to the outlet. A rare "code red" was also issued over Storm Darcy, the first snowstorm to hit the Netherlands in a decade.

The Dutch prime minister, Mark Rutte, even gave a warning to ice skaters to social distance and avoid injuries if possible, so as not to fill hospital rooms needed for COVID patients.

With temperatures expected to be back to normal by the weekend, the ice skating will likely fall out.