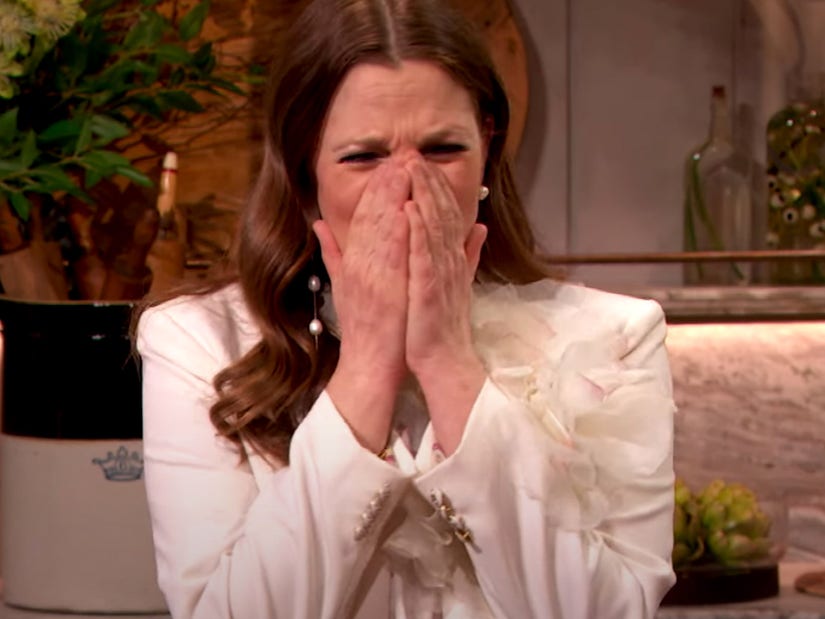 The show posted the entire episode on YouTube, which includes an incredibly sweet surprise from Barrymore's two daughters; Olive, 8, and Frankie, 6.

Around the 25-minute mark above, guest host Savannah Guthrie introduces an animated video the girls made. "Hi Mom!" says Frankie, providing the voice to a cartoon kitten, "Olive and I wanted to send you a special message on your birthday, so here it goes."

The two then read a poem about how much they loved their mom, moving Drew to tears.

Drew Barrymore celebrates her 46th birthday today -- and marked the occasion with a surprise-filled episode of her talk show that left in her tears multiple times throughout the hour.

The celebration felt a bit like a "This Is Your Life" episode hosted by Savannah Guthrie, with famous faces from throughout Barrymore's career popping up to reminisce on all the good times they had together.

One of the most emotional reactions from Drew came for her godfather and "E.T." director Steven Spielberg, who she said was "the first person I knew cared" about her.

"Oh Drewface, I still care about you," he told her. "I've always cared about you ever since the first time this little blonde hurricane walked into an audition in my office and took us by storm and then soon took the entire world by storm, that was you then and that is you today."

While Drew said she "lived to" make Spielberg proud, the two also touched on something she did that he maybe didn't want to see: her Playboy spread from 1995. After the photos were released, Spielberg sent her a quilt that said, "Cover up" on it -- and while that story has been shared by Barrymore before, we didn't know what happened next.

"I sent her the Playboy layout and I had an artist come over and do paper doll cutout clothes which I glued on to all of her partially exposed photographs and sent the whole thing back to Drew, 'Now she's dressed,'" Spielberg continued. "Then about a week later, Drew sent me something. She sent me an apology."

The tongue-in-cheek "apology" came with a series of photos of Drew from her childhood, dressed as a nun.

He also revealed he still has them framed in his house.

Another guest who brought the tears out of Barrymore was best friend and "Charlie's Angels" costar Cameron Diaz.

"We have spent so many birthdays together. Usually ... we get to actually be together," explained Diaz over Zoom. "We are not big gift givers, we're more about experience so we always try to go someplace and do something with the girls and be together and cook and eat and hang and stay up all night and just have the best time."

The two explained that they've been to the Caribbean, Hamptons and Hawaii together on their various b-day escapades -- as Barrymore said she's the only person she's slept with in a non-romantic way. "I've slept in a tent while my fever was breaking on a Chilean mountain in a thunderstorm in like Patagonia, I mean yeah we've been everywhere together," she added.

Guthrie then asked the two to explain their "Poo Poo" nicknames for each other.

"Well it started out as like classic boy humor and then it just evolved into a true term of endearment and then it just stuck," said Drew. Added Diaz, "When we're at a restaurant she'll say to the waiter, 'Ask Poo Poo what she wants' and people will be like, 'What?' She's in my phone as Poo Poo."

The two were also asked what they thought about possibly doing another Charlie's Angels film, something fans have been clamoring for for years.

"I'm glad that people feel that way, you know I'll be grannies in inner-tubes with Poo Poo. We can do anything and everything as long as we are together," said Barrymore. "I have a whole life to live with you."

"I always say never say never. There's never a time where we're not going to be connected or consider something together," added Diaz. "I can't wait to grow old with you and experience the rest of our life together. One of the great joys of my life is our friendship. I think you're so special and to celebrate you is the absolute, every year it's one of my favorite times of the year."

One third guest who actually made an in-studio appearance for Drew's special day was David Letterman, as the two recalled their very memorable interview together on Dave's show back in 1995. During that "Late Show" appearance, Barrymore danced on his desk and flashed him, for what was then his 48th birthday.

"I'll tell you honestly I used to watch old movies, Blackboard Jungle, Glen Ford and what happens is the juvenile delinquent teenagers take over the classroom and they are up on Glen Ford's desk and they are going to beat him up and so Drew is there, I love the, 'Hi, Paul,' and then she climbs up on the desk and I thought to myself, 'Oh no, I've lost control of the class,'" recalled Letterman. "And then my next thought was, 'I think I am probably going to get kicked,' and then everything changed. You know in the 'Wizard of Oz' when everything goes from black and white to color that's what it was like."

"I had no plan of doing it," said Barrymore. "It was one of those moments in my life where I felt like a magnet was pulling me and it was all very playful and well-intended and I just had no idea where it was going. And I almost was like, 'Should I be embarrassed? Did I do something bad? Am I in trouble?' and I knew in that moment that with one turn you could have gone, 'Why did you do that? What is wrong with you?' And instead you had that smile and you said to everyone this moment is okay ... I hope I can be half the man Dave is right now and just let something innocent and spontaneous be innocent and spontaneous."

Letterman said he "immediately" recognized the moment as "unique" -- and joked he was going to be "upset" if she wound up doing the same thing "on Leno's show."

"But it was kind of a connection for us throughout the rest of our existence together," he added.