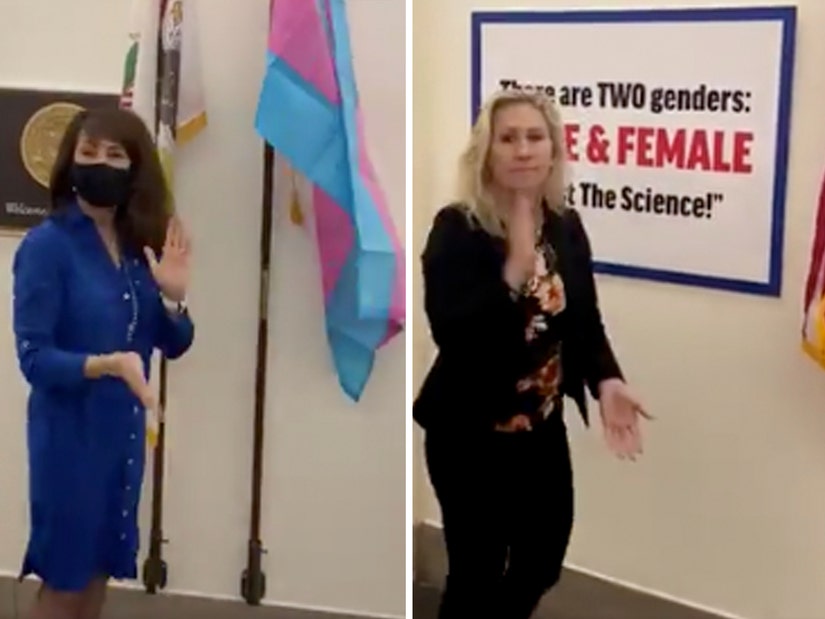 The sign was placed outside the office of another lawmaker with a transgender child.

Rep. Marjorie Taylor Greene is facing the wrath of Hollywood, after posting a video in which she's seen hanging an anti-transgender sign outside of her office and directly across the hall from another representative who has a transgender daughter.

The disagreement between the Georgia Republican and Illinois Rep. Marie Newman stems from the Equality Act, which the House is poised to pass later on Thursday. The bill would ban discrimination against LGBTQ Americans and set new protections based on sexual orientation and gender identity, and not simply the umbrella of "sex."

On Wednesday, Newman shared a video showing herself hanging the pink, white and blue transgender flag outside of her office -- which is directly across from Greene's. "Our neighbor, @RepMTG, tried to block the Equality Act because she believes prohibiting discrimination against trans Americans is 'disgusting, immoral, and evil,'" Newman captioned the video after Greene argued against the bill on Wednesday.

"Thought we'd put up our Transgender flag so she can look at it every time she opens her door," she added.

Greene was quick to post a video of her own, in which she's seen hanging a sign reading, "There are TWO genders: MALE & FEMALE. 'Trust the Science!'"

She followed Newman's lead by captioning the video, "Our neighbor, @RepMarieNewman, wants to pass the so-called 'Equality' Act to destroy women's rights and religious freedoms. Thought we'd put up ours so she can look at it every time she opens her door."

The move was called out by some of Greene's colleagues, including Republican Rep. Adam Kinzinger -- who voted to strip the representative of her committee assignments earlier this month after horrific statements from Greene's past were resurfaced online.

"This is sad and I'm sorry this happened," tweeted Kinzinger. "Rep. Newmans daughter is transgender, and this video and tweet represents the hate and fame driven politics of self-promotion at all evil costs. This garbage must end, in order to #RestoreOurGOP."

Kinzinger wasn't alone in his outrage, as a number of celebrities also joined in by condemning her behavior.

"'Trust the science' wrote the Q-Anon sympathizer (who believes wildfires are caused by Jewish Space Lasers) on a sign outside her office outlining a false gender binary, which has never existed since the beginning of time," wrote Padma Lakshmi, who went on to point out the difference between sex, gender and sexual orientation.

Patricia Arquette, meanwhile, responded directly to Greene's post, saying, "You are not a good person."

And this poorly written sign was scotch taped outside this lunatic's office purely to harass @RepMarieNewman whose office is across the hall & whose support of her trans daughter is one of the reasons she's voting yes on the Equality Act to end LGBTQ discrimination.

Gender: used to describe characteristics that are socially constructed, encompasses a range of identities

Sex: The sex assigned to a child at birth, often based on the child's external anatomy

Sexual orientation: emotional, romantic or sexual attraction to other people

You are not a good person.

Debra Messing called Greene "despicable, loathsome, and ignorant" and a "hateful bigot," while trans "Pose" actress Angelica Ross tweeted, "Some of you enjoy being awful human beings. So please spare us the tears when Karma comes for you."

"RuPaul's Drag Race" winner Shea Coulee responded to Ross' tweet adding, "I’ve just been going and reporting all her tweets for being abusive and harmful. I suggest y'all do the same so that she can’t keep slinging this hateful vitriol on the internet."

.@mtgreenee You are despicable, loathsome, and ignorant. You suggesting that an EQUALITY Act will hurt women’s rights and has anything to do with religious rights is willful gaslighting. You are a hateful bigot, THAT is why you are against Equality. #TransRightsAreHumanRights https://t.co/14LojgWY5L

Some of you enjoy being awful human beings. So please spare us the tears when Karma comes for you. https://t.co/AQDrzxBCSC

I’ve just been going and reporting all her tweets for being abusive and harmful. I suggest y’all do the same so that she can’t keep slinging this hateful vitriol on the internet.

So that “free time” you threatened us with has been spent figuring out how to design posters on Microsoft Word? https://t.co/GqSqYEdcFD

Oh, Marjorie. You wouldn't know science if it hit you on the way out. https://t.co/YTSlPoJvPV

Is this Congress or Saved by the Bell ?? https://t.co/seeZ6XJh7j

I’m sorry but just how big of a POS do you have to be to even think of doing this, let alone actually going to a print shop, having it made, buying double stick tape, cutting pieces of it and applying it to the back and then putting it up and being proud of it? #shesallyoursGOP https://t.co/6RSAWsuGjX

God you’re repugnant. I guess being banned from committees gave you time for your “hate scrapbooking.” https://t.co/Rmr317nbUp