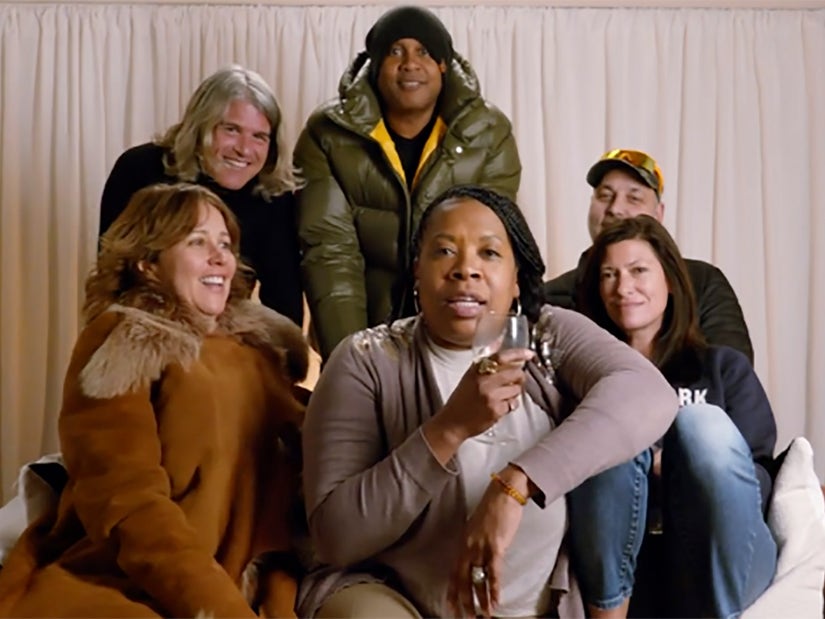 The premiere included updates on everyone's lives ... and previously-unseen footage from that Kevin and Julie fight over race.

In 1992, seven strangers were hand-picked by MTV to live together in NYC, have their lives taped and prove what happens when people stop being polite and start getting real. And, 30 years later, some of those emotions are still a little raw.

Premiering Thursday on Paramount+, "The Real World Homecoming: New York" reunited the show's original cast for a six-episode revival filmed over six days in the same loft they lived in three decades ago. But while Becky Blasband, Andre Comeau, Heather B. Gardner, Julie Gentry, Norman Korpi and Kevin Powell were all thrilled to see each other in person, one housemate was mysteriously MIA: Eric Nies.

After the six who were allowed into the loft said their hellos, Nies popped up on their TVs and told them all he had flown to New York to film with them, but tested positive for coronavirus and had to instead do all his appearances from a nearby hotel room. The other cast members were heartbroken -- especially Heather. While Becky said she'd risk Covid to have him with them, she was alone on that one.

The full premiere episode has been posted on YouTube:

In a "Where Are They Now?"-type update, Eric explained that in the years since being on "The Real World," he went on to appear in a number of MTV shows like "The Grind" and "The Challenge" and has been drug and alcohol free for 18 years. He's now a bit of a guru, explaining that he's a "spiritual guy" who assists "other people to heal from many different issues and illnesses and addictions."

As for Julie, she said she hoped to be a dancer in New York when they wrapped, but lost out on roles because of her notoriety from the show. While she lived in Los Angeles with Norm for a bit, she returned home to Birmingham, Alabama when her parents' health declined. There, she met her husband, got married, had two now-fully grown kids and felt like she came full circle when dropping one of them off at college. It appears she currently teaches dance.

Viewers also got a peek into Andre's home life, as he introduced the cast to his 4-year-old daughter Sophie via FaceTime -- and said that while he never thought he'd be a dad, he loves it.

While we're sure the show will fill in the blanks for the rest of the cast as the series continues, it was also fun to see the stars themselves catch up with each other. Some of them hadn't spoken in decades ... and hoped to prove they'd changed in that time.

"We've all had our differences through the years ... is there some healing that needs to happen here?" asked Kevin, who appeared to be the only one back in the '90s aware of the racial injustices, systemic racism and white privilege plaguing America. As they reconnected, the whole cast saw some huge parallels between what was happening then -- with the Anita Hill hearings, Rodney King assault and Los Angeles uprising -- and now, with the #MeToo and Black Lives Matter movements.

Even Heather admitted she didn't understand Kevin's passion at the time, but she gets it now. "I had to live to appreciate it," she said, "What he was dealing with at the time and how he saw it, he was right. Fast forward, where's the lie?"

It's clear from the premiere that the season will really home in on the infamous fight that erupted between Kevin and Julie on the original series. While the incident that sparked the feud wasn't caught on film, a follow-up argument outside their apartment was. In it, Julie accused Kevin of pulling the race card -- exclaiming, "get off the Black and white thing, I'm sick of it!" -- while he explained that "racism is everywhere," something she didn't want to hear.

The "Homecoming" premiere even showed previously unseen footage from the fight, in which Julie called Kevin "the biggest asshole, Black or white, I've ever hoped to meet." He went on to call her "a racist."

"Everyone I encounter references that argument," Kevin said in a confessional. "At the time, my roommates, they just didn't know anything about American history. We didn't get to unpack that stuff, we need to have a conversation."

As they reunited, Becky acknowledged her white privilege, while Andre said he hoped to also set right some of what he said back in the day. While Kevin and Julie didn't hash it out yet -- we have five more episodes, people! --  he did have a great conversation with her daughter about race over the phone.

After Julie's 17-year-old daughter said she loved seeing Kevin speaking about racial injustice on CNN recently, she explained she was an ambassador at the Civil Rights Institute in Birmingham. She also acknowledged she lives in a very racist part of the country.

"We need more and more women leaders all over the world, we really need you," he told her. "I hope to meet you one day." It was a really sweet moment and one hopes that if her daughter is so aware of her privilege, Julie herself might be now as well.