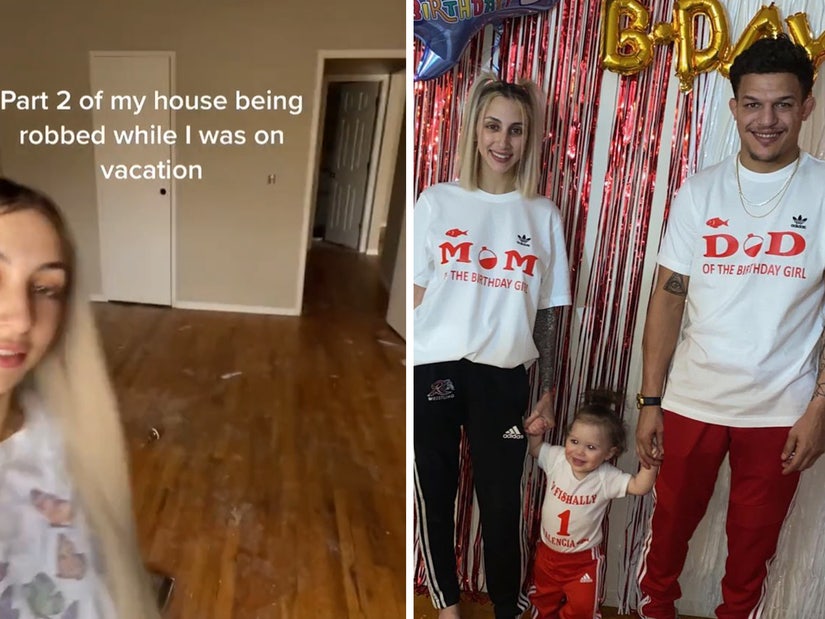 Her dad just died in December.

A New Jersey mom returned from a vacation to find her apartment stripped bare — and her father's ashes in a dumpster.

Kayla Lacara, 22, posted a video on TikTok Tuesday, claiming her landlord had stolen and dumped every single one of her belongings.

The clips show her now completely vacant apartment: Her daughter's crib, clothes, diapers, wipes, all her furniture, her TV, food, utensils, cleaning products, right down to her door knobs had been removed.

"Literally anything you could think of — our toothbrushes, our hair products, my baby's crib, all of her toys," she said.

Speaking to TooFab on Wednesday, the mother of two said she spotted her daughter's high chair sticking out of the dumpster, so she tried to see if there was anything she could salvage — when she discovered something even more upsetting.

"I went dumpster diving, and I found my dad's urn, with all of my dad's ashes all over the floor, sticking to the bottom of the dumpster," she said.

Her dad only died this past December, aged 50.

Kayla and her boyfriend and their one year-old daughter moved into the apartment last year, after spotting an ad on Facebook for a short-term 6 month lease, which suited them perfectly, and paid the rent up until the end of March.

What she didn't know, she said, was that the landlord was allegedly sub-letting the apartment without the owner's knowledge; having lived there herself for ten years, the sub-letter had bought a house and was supposedly trying to get out of the lease early and retrieve her security deposit.

On February 22, Kayla posted on Instagram that she was taking a short vacation to Miami with her boyfriend and daughter; when the landlord saw this, Kayla claimed she texted her and told her she needed to be out of the apartment by that weekend, threatening to leave all her belongings outside.

Kayla went to Brick Police Department to report the alleged threat and ask if it was legal, and they assured her it wasn't. But that didn't appear to stop the landlord from allegedly emptying the apartment anyway.

The owner of the building — who had no idea any of this drama was going on — is now seeking an eviction notice, as she has already rented out the apartment to a new tenant next month.

Kayla and her young family, who for now are still in the empty apartment, have no family to turn to and nowhere to go.

She believes the landlord can get charged for burglary, and be court ordered to pay restitution — which under New Jersey law is almost impossible for the victim to collect.

A GoFundMe to help the family has raised almost $3k.