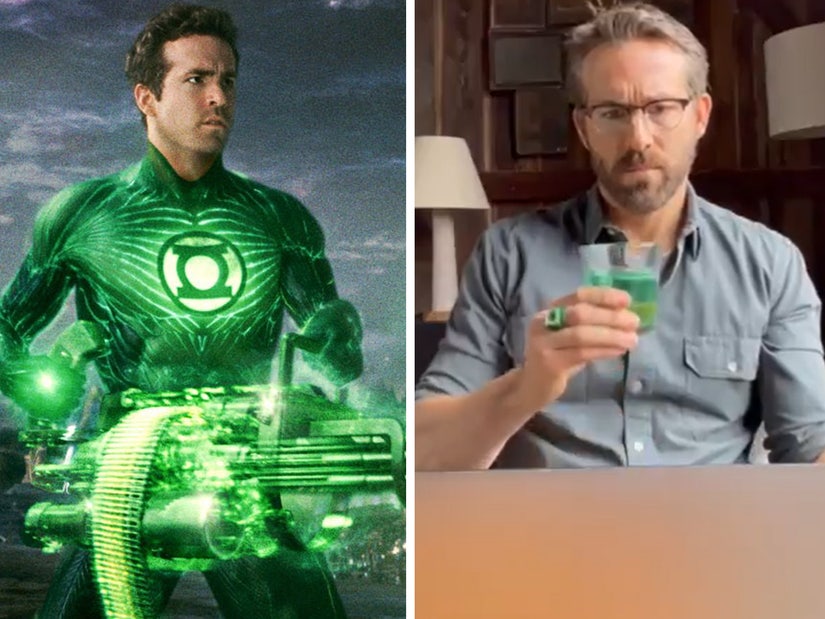 His verdict: "It ain't a tragedy."

In the pantheon of superhero movies, "Green Lantern" isn't exactly held in high regard. The movie, which was a critical and box office disappointment, is not only not beloved by fans -- but its own star had never fully watched it, until now.

In celebration of both St. Patrick's Day and the release of the #SnyderCut, Ryan Reynolds decided to promote his gin brand on Wednesday night by throwing back a few green cocktails while sitting down to watch the movie from start to finish for, apparently, the first time ever.

"Excited to see the Snyder Cut. But ahead of its debut – and with the aid of a good amount of #AviationGin ... I'll do something I've never done: actually watch Green Lantern. Happy #StPatricksDay," he exclaimed on Twitter ahead of his live-tweet session.

"Starting GL now. First time ever. Too early to ask for a #SnyderCut of this f---er?" he said as the movie began, adding that he "only ever read my parts of the script," making the movie "genuinely exciting for me to watch."

"This protagonist seems reckless but likable," he then tweeted, about himself, before joking, "I swear I’m drinking to Grammy winner and international ambassador of joy, @TaikaWaititi. Not to numb any pain I might be in."

He then poked fun at his character's "tragic" backstory, before joking about his now-wife Blake Lively's appearance in the film and how it foreshadowed their life as parents.

This was not bad foreshadowing for my life as a dad pic.twitter.com/sj5jzWrWUt

He went on to praise his costars -- saying he loves Stanley Tucci, believes Angela Bassett is "stunning. Period," misses Michael Clarke Duncan and said the cast overall was just "incredible."

"There's a lot of heavy hitters in the movie," he added. "Not always used in the right way... but still... heavy hitters."

"I stand by my oath performance," Reynolds later tweeted. "Do you have any idea how weird it is to act while being attacked by invisible space energy?"

Reynolds continued to pour himself some cocktails as he kept watching the film, revealing he not only still had his ring from the movie, but was actually wearing it as well.

Still have the ring pic.twitter.com/eDezX6iTQc

After the film was finished, Reynolds seemed to be at peace with the movie overall.

"Maybe it's the Aviation Gin talking, but #GreenLantern was nothing to fear," he wrote. "Hundreds of incredible crew and cast members did amazing work — and while it's not perfect, it ain't a tragedy. Next time I won't wait a decade to watch."

"Happy #StPatricksDay and good luck to the #SnyderCut on @HBOMax," he concluded. See more of his tweets below. Both "Zack Snyder's Justice League" and "Green Lantern" are on HBO Max now.

See if you can spot the CGI! pic.twitter.com/aXUXA8kR2i

We are all Hector. pic.twitter.com/kntSxQxCrN

They spent 6 hrs each day turning Peter Sarsgaard’s head into an over-inflated beach ball. But the GL suit is a onesie made from old Frogger pixels.

E True Hollywood Story should do a “where are they now” piece on Hector’s mustache. I genuinely wonder what it’s been up to.

Wow. Hector just threw his father into a gigantic tornado of fire. That’s exactly how my dad died.