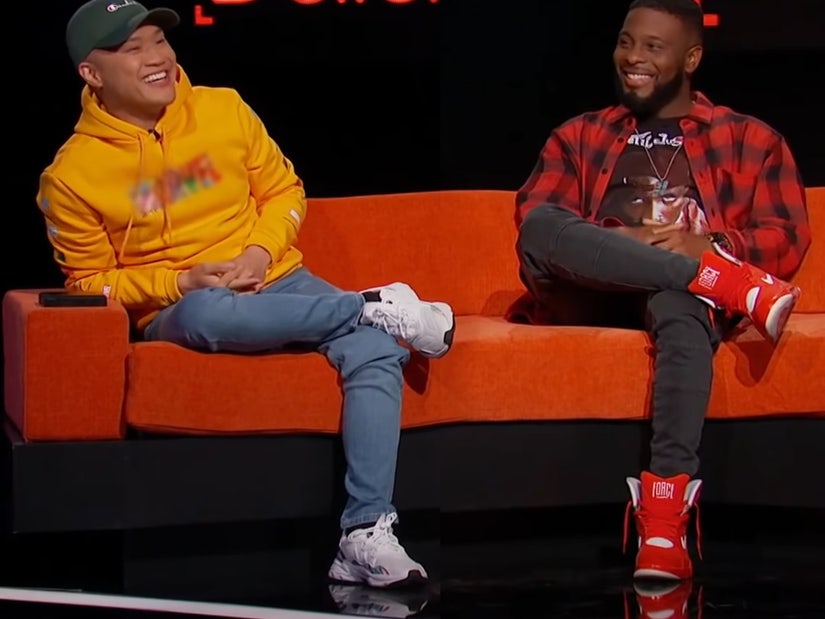 "It's a lot of surprises on Season Two," promises Kel Mitchell.

MTV's "Deliciousness" is back for another hilarious round of food blunders, restaurant server fails and cringe-worthy kitchen chaos.

Each episode is hosted by Tiffani Thiessen, who treats her all-star panel of foodies -- Angela Kinsey ("The Office"), Kel Mitchell ("All That," "Kenan & Kel") and Tim Chantarangsu ("Basic to Bougie") -- to a smorgasbord of some of the internet's most viral and entertaining videos.

TooFab caught up with Kel and Tim to ask them what we can expect from the latest episodes and if anything tops the clip of a brave soul drinking a smoothie made out of crickets, hot dogs and milk.

"Oh yeah," exclaimed Kel. "It's a lot of surprises on Season Two. Gross videos, fun videos, funny videos of people falling in the kitchen. It's like whole bunch of stuff. I mean, there's one where a girl is about to vomit but she covers her mouth and it goes through her nose. So it's a lot of fun stuff."

Tim added, "It's funny because when we first watched that clip, it was already gross with the hot dogs. I didn't even notice that the crickets were in there and then upon rewind and review, I was like, 'Oh my God, there's crickets in there!"

While the gross-out gags are numerous and graphic, the gang takes it all in stride and help each other move on to the next round, like a tight-knit group that has been doing this for a while.

"I'm loving being back with the cast," explained Kel. "We're like a family now. We've grown closer together since first season, so it's been awesome."

"We're all fans of each other from our different shows," he continued. "It's just good chemistry all of us on the couch together. We all have different likes when it comes to food and things like that. So it's just funny hearing all the different takes on it. Some of the great moments are the in-between stuff."

For Tim, he was surprised how well the cast got along right off the bat, especially with him being so star-struck.

"I was tripping out cause I was like, 'Oh my God, look at these people I'm on set with! This is amazing!' I grew up watching all these people -- from 'Saved by the Bell' and 'All That' to 'The Office.'"

"I still kind of have a crush on Kelly Kapowski. And so I'm looking around and I'm tripping out just to be on stage. And then I'm not going to lie. Part of me was like, 'Is this gonna work?' Because it feels like a random group of people. Right? But as we started showing and just joking and really getting to know each other, you understand that we all have a bond through food, we all love food. And from that, you can get so many things in common with people and so many shared experiences and so many things that people can relate to on different levels, you know?"

"And we always kind of have a good time."