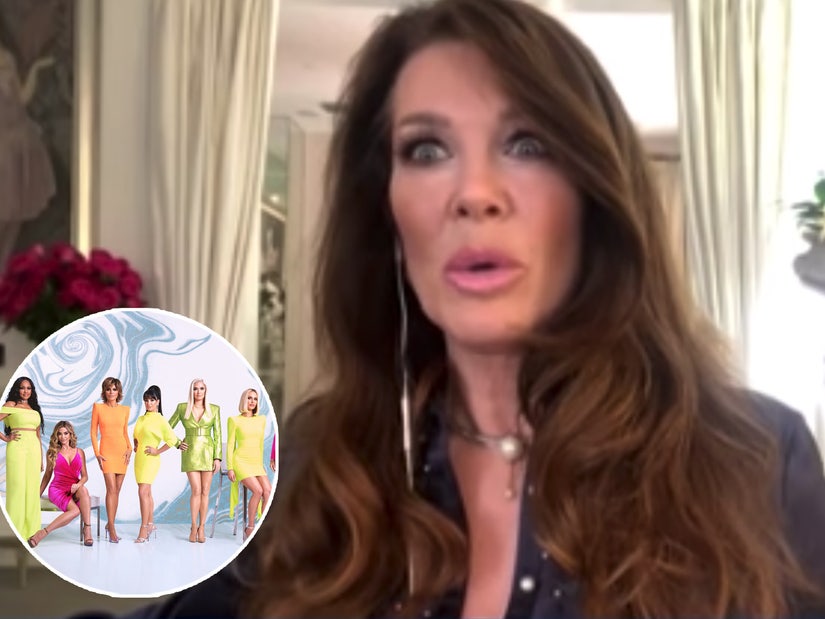 LVP was grilled on Kyle Richards, Erika Jayne's divorce and the future of Vanderpump Rules on WWHL.

While Lisa Vanderpump is still very much a part of the Bravo family, don't expect to see her back on "Real Housewives of Beverly Hills" anytime soon -- or at least before they totally clean house.

The former RHOBH star appeared on "Watch What Happens Live" with Andy Cohen on Tuesday night, where he made sure to keep the drama between her and her former costars alive by asking a few shady questions.

First, he asked whether she would "start a conversation" with Kyle Richards if the two wound up stuck in an elevator together.

"I'd look for the escape panel first and then I might ask her to give me a leg up and stand on her shoulders," Vanderpump replied, before getting serious. "What is there to say? I think the only thing that could be said has gotta start with an apology. If someone calls you a liar, no, not okay with you."

The two former best friends, of course, had a major falling out while filming Season 9 of the show -- after Richards confronted LVP about planting a story in the tabloids to make Dorit Kemsley look bad. Since Lisa's exit, Denise Richards, Sutton Stracke and Garcelle Beauvais joined the show, before Richards quit and both Crystal Kung Minkoff and Kathy Hilton were recruited for the next season.

"I love Kathy. I think that's a very positive aspect to it," Lisa said of Hilton joining the show. "People ask me all the time, am I going back? It's been such a long time, I've just got a lot going on, I've been writing a book. But I do love Kathy ... if you could just get rid of the other five, then yeah, I think there's a possibility."

So, she's saying there's a chance?

Vanderpump was then asked about another former costar: Erika Jayne, who is in the middle of a messy divorce from husband Tom Girardi. The divorce battle comes on the heels of a major lawsuit for the two, who are being sued for allegedly embezzling money from a settlement intended to compensate the families of victims of an airplane crash and using it to fund their lavish lifestyle.

"That's not an easy question. It's been absolutely fascinating, this whole thing, the way it's played out," said LVP when asked about the legal issues.

"I actually feel so bad for the victims, they've been watching this unfold," she added. "I just don't understand all that $40,000 a month glam squad, but when you see these poor people, it's very devastating."

Of Dorit Kemsley being called a "restauranteur," LVP reportedly added, "I don't think it's really a restaurateur when you decorate the dining room somewhere in a back space. I think that's vastly different than running restaurants. I hope it's more successful than her bikini business."

The rest of her appearance was, mostly, RHOBH-free. Vanderpump opened up about the "devastating" loss of her dog Giggy back in December, revealed she's very close to a number of Bravolebrities -- including Jenni Pulos, Jeff Lewis, the Dubrows, Camille Grammer and Joyce Giraud -- before opening up a bit about "Vanderpump Rules."

When asked when the show will resume shooting, she threw the question right back at Andy, asking if he had any idea either. "Everyone asks me the same thing," she said, blaming the ongoing Covid pandemic for the delay. "We're headed toward the right direction, but I think Bravo's got to announce when they're ready to do that again. We're getting there."

She also addressed the pregnancies from both current and former cast members, as Lala Kent, Brittany Cartwright, Scheana Shay and Stassi Schroeder all recently gave birth or are currently pregnant.

"I expected it from Jax and Brittany. Lala, I knew she was headed in that direction. I suppose Scheana, because it seemed so quick being in such a new relationship," she said when asked which pregnancy surprised her the most. "Scheana does fall in love very often. One minute she was freezing her eggs, the next minute they were fertilized and she's ready to pop soon. I spoke to her a couple of days ago."