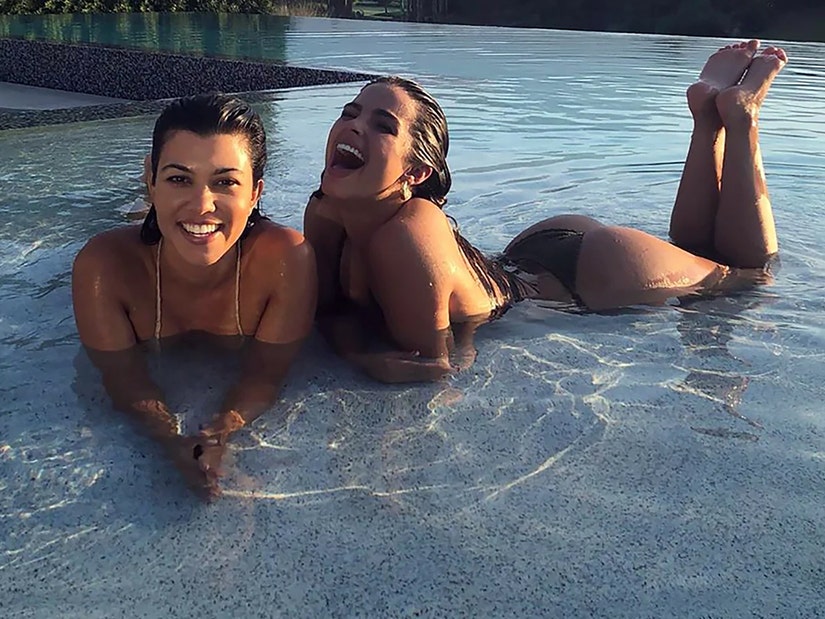 Kim reveals she heard Kourtney complaining about her to Rae after she accidentally forgot to hang up the phone.

All eyes were on TikTok star Addison Rae on Thursday night's episode of "Keeping Up with the Kardashians," as the family all found the social media influencer's friendship with Kourtney beyond weird.

Kourt, 40, explained that she became friends with the 20-year-old during quarantine, as she and longtime friend Harry Hudson were part of her pod. "It's just nice to have good positive energy around," she explained. "I think sometimes you just connect with certain people and we just love hanging out with each other."

Kourtney's family all saw a shift in her behavior after the two became friends, with Khloe saying after "a fragile year," she was starting to see "a glimmer" of the old Kourtney again. "Its'a helluva lot better than it was," noted Scott, while Kim explained that they're "a little curious" about why the two are friends. "We are curious what they have in common, there is a big age difference," she added.

While speaking with Mason and Khloe, Kim also revealed that Kourtney blew her off to hang out with Addison.

"I'm gonna give you an example of what never to do to your family members," she began. "I call [Kourtney], Addison was over, I was telling her a deep problem I was having, I needed someone to talk to, I needed someone to confide in. I call her, we were talking, she seemed really interested in what I was saying."

"She said, 'I'll call you back because Addison's here, I can't really talk and I want to be private.' Understandable, respectable, right? She goes I'll call you later," Kim continued. "She thinks she hangs up the phone. You know what she says? Ugh,  sorry, that's my sister Kim, she's just blabbing. I tried to get off the phone with her 10 million times for the last hour and she won't shut up or get off the phone. I was like, is this a joke?"

While they all agreed that Addison helped Kourtney get her groove back, they were still suspicious -- so they invited Rae over for lunch for an interrogation session, without Kourt.

They asked about her living situation, whether she'd ever been arrested, her blood type, credit score and who in the family Kourtney said was her favorite. Khloe then point blank asked, "What the f--- did you do to Kourtney to make her so happy?" -- before Kim wondered if they were more than friends.

"Honestly, at the beginning, we were like wait, are they...hooking up? If it was that kind of relationship," she said, while Scott added, "I'm still thinking that. That was the elephant in the room…It's OK if you are."

After the grilling, Kourtney came by and confronted Kim and Khloe for giving Addison the third degree. "What is your obsession?" she asked them both. Khloe explained they were just trying to figure out what it is about Addison that puts Kourtney in a good mood.

"The people you choose, when you choose to hang out with someone, it's like your energies align," Kourtney explained. "I feel like I have a young heart and old soul. I feel like we all have such a good circle of people around us, everyone is different ages, I don't think it's about the age, I think it's about people's energies and vibes."

In a confessional Kourtney said she understood her sisters' curiosity, joking that it's "so exciting they want to know everything about me." She added, "People seem to focus on the age gap between Addison and I but I don't think every person needs to understand my relationships with each of my friends."

Kim told her they just wanted to get a better feel of Addison's vibe and asked her sister if she could "sprinkle" some of that happier Kourtney on them sometimes too. Khloe, meanwhile, said she enjoyed getting to know the 20-year-old and felt that, "the more I get to know her, the more I understand why Kourt's such good friends with her."

"She's honestly an incredible girl," she added, "I really do like her and enjoy spending time with her."