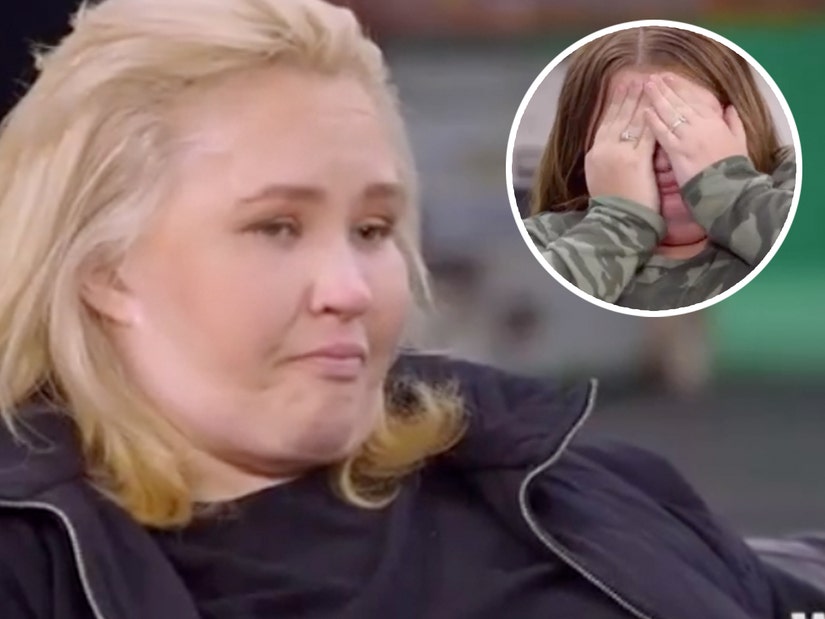 Here's everything that went down when Honey Boo Boo and Pumpkin finally told June how her drug use affected them.

After a year of being estranged from her children, Mama June Shannon finally came face to face with Alana "Honey Boo Boo" Thompson and Lauryn "Pumpkin" Shannon on Friday's "Mama June: Road to Redemption."

June first sat with Dr. Ish Major, who warned her she could easily relapse if she didn't "deal with your own s---," including working on her relationship with her kids. He told her to be real with them, listen and stop trying "to make it sound pretty" -- saying the girls would want her to take accountability for how her drug use affected them.

When Alana and Lauryn walked in, June immediately started to cry as she hugged them both. The waterworks wouldn't stop as their sit-down continued throughout the rest of the hour, with all three of them getting emotional.

Before they really dug into things, however, Lauryn demanded June take a drug test to prove she was sober. She agreed and passed with flying colors, before saying that even if she had to "earn your trust by pissing in that cup every day, several times a day," she'd do it.

With that, it was time for Alana to tell June everything she's waited a year to say to her and it was clearly too much for the teenager, who broke down in tears before she could even start talking.

"It's just hard because you wasn't there for my first day of high school and I feel like that's a very big thing. it was hard for me not having my mom there," she told June. "I'm very grateful that Pumpkin was there for me, but why wasn't you there? Why wasn't you there in the moments that I needed you most?"

June said she was sick and couldn't even take care of herself, noting that she's been "selfish" in rehab and recovery.

"You don't know how many nights I went to sleep just hoping and praying that you don't overdose. 'God please, don't let my mom die, hold onto her, just please,'" Alana continued. "I just wanted you there. Even if I texted your phone, I wouldn't get a text back. I never knew if you were alive or dead."

Then it was Lauryn's turn, as she explained how hard it was for her to take care of Alana and her own daughter Ella, while also paying all the bills and dealing with some stress in her marriage. She said it felt like she was "drowning in everything" and said this was not what she had planned for her life.

June then said she felt like her daughters turned their backs on her, something they did after multiple attempts to get their mother help, which she didn't take seriously at the time. "Knowing that y'all chose to walk away, I'm not gonna lie to you all, I was kinda pissed," she told them.

"It's not that we gave up, we tried everything," said Pumpkin. "We came to the conclusion that if you wanted to get back to seeing us, you would do what needed to be done."

June also told them that her boyfriend, Geno Doak, was also a different person post rehab -- and explained he was the one who urged them to get clean. While both Alana and Lauryn were happy to hear that, they still were in no rush to mend their relationship with him as well. June understood, but added that he wasn't going anywhere.

After the meeting, all three of them felt like they were in a better place. Speaking with each other, Alana and Lauryn said she seemed better and healthier and sounded excited for what the future could bring. June felt the same way, adding that seeing them made her realize she "missed out on so much."

The episode ended with Lauryn and June meeting up at a park the next day, where Pumpkin gave her mother a surprise: a playdate with Ella. June broke down in tears again when she saw her granddaughter run toward her. Everything seemed like it was going well, until Geno showed up out of the blue. The episode ended with Lauryn reacting in shock, as she asked her mom, "What the f---?!"