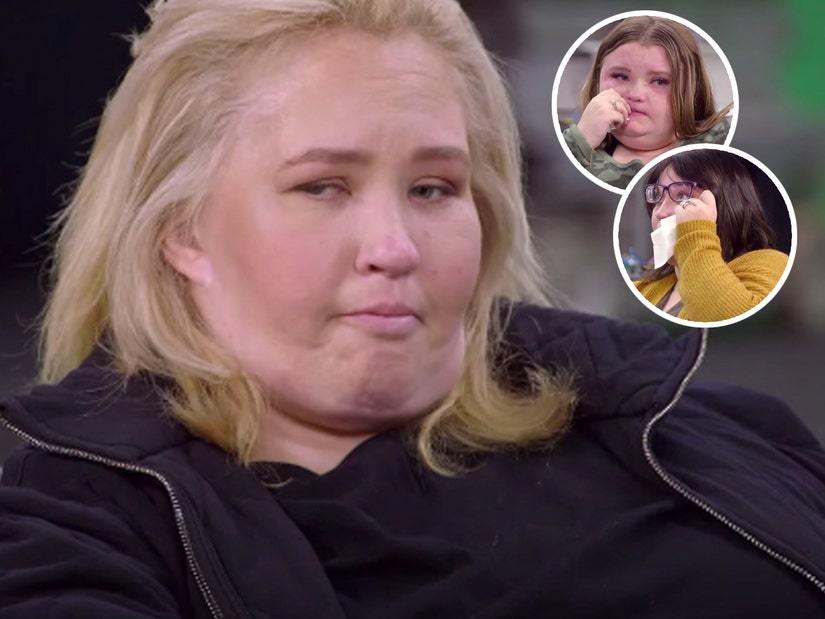 After airing some of their grievances, June tells her daughters she was actually "kinda pissed" with them.

Following about a year of being estranged from her kids after Mama June Shannon fell into a downward drug spiral and eventually entered treatment at a rehab facility, she finally comes face to face with them on tonight's new episode of "Mama June: Road to Redemption."

With the help of family therapist Dr. Ish. Major, June sits down with both Alana "Honey Boo Boo" Thompson and Lauryn "Pumpkin" Shannon in the new hour, for a conversation that went down about seven months after she and boyfriend Geno Doak completed their stay at Banyan Treatment Facility in Florida.

In this exclusive sneak peek, Pumpkin begins to break down just how hard things got for her after the family decided to take a step back from June when she wouldn't initially get help. Alana really stepped up and became a guardian for her younger sister -- while also raising her own daughter and dealing with new strains on her marriage.

"You were always, 'It's us girls, it's us girls,' and then it really was just us girls. It really was just me now, taking care of Alana, Jessica, Ella," Lauryn says to her mom. "I've matured, but it's also been overwhelming dealing with it too because I had to grow up a lot more than I wanted to. I can't pick up and be like, I'm gonna go here tonight with my friends because the majority of them don't want to hang out with me because I have Ella and I don't want to leave Alana at home."

Both Lauryn and Alana are in tears for most of the clip, as Dr. Ish says their mom's drug habit "robbed" them of the "life you had planned for yourself at this age."

"I try to smile through it, act like it doesn't affect me because I don't want Alana being upset, I don't need Ella coming up to me being like, 'Mama, why are you upset?'" Lauryn continues. "I can't let my guard down because I gotta take care of the kids. There's no taking care of myself."

When Dr. Ish tells June she's taught her children to "take responsibility for everybody except themselves," she agrees that's a tactic that clearly isn't working.

"Have you been through rough stuff? Yes. But this is the roughest it's been for them because their mom hasn't been there," he tells her, before asking her to reveal what was hardest for her as a mother, knowing she couldn't be there for her kids when they needed it. Instead of offering up an apology, however, she appears to go in on them instead.

"Knowing that y'all chose to walk away, I'm not gonna lie to y'all, I was kinda pissed," she begins, catching everyone off guard. We'll see if she finishes that sentence with a "But" and some self-reflection when "Mama June: Road to Redemption" airs Friday night on WE tv.