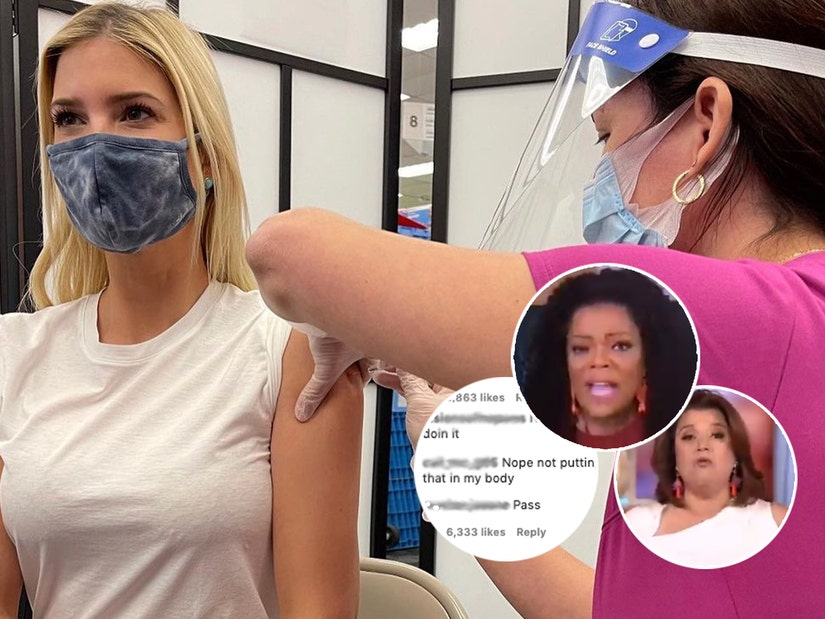 Ivanka Trump set off quite the online firestorm this week when, on Wednesday, she shared photos of herself getting the Covid vaccine.

"Today, I got the shot!!! I hope that you do too!" Donald Trump's daughter and former senior advisor captioned the images, in which she also thanked the nurse administering the vaccine.

According to PEOPLE, she made the move public to urge others to get vaccinated -- but not everyone was a fan of the photo-op, including "Big Shot" actress Yvette Nicole Brown, who shared her opinion Friday on "The View."

“I’m so over these people and them picking and choosing when they want a camera moment,” @YNB says of Ivanka Trump posting photos getting vaccinated.

“If she had done this or at least stood up for COVID safety a year ago, hundreds of thousands of people may still be alive.” pic.twitter.com/Cc3oevkWZz

"I am so over these people picking and choosing when they want a camera moment for something that matters," she said. "If she had done this or at least stood up for COVID safety a year ago, hundreds of thousands of people may have still been alive."

"The idea that she's got her little white tee on, her cute little jeans and now we're getting vaccinated makes me want to flip tables," she added. "I am over these people, I'm over everyone like them, I'm just sick of it."

While guest host Ana Navarro got a kick out of her response, Navarro herself actually gave Ivanka -- who she dubbed Nepotism Barbie -- props for the move earlier in the show.

"I can't believe I'm going to say anything good about her. You all know I'm no fan of Nepotism Barbie, but here I go, take a deep breath," she began. "Yesterday, I commended Ivanka Trump for having used her platform to show herself getting the vaccine and promote vaccination."

Navarro was referring to a tweet she fired off on Thursday, saying, "If you're standing up, please sit down. Brace yourself. I'm gonna say something positive about @IvankaTrump." She continued, "Given politicization of vaccines by many Trumpers, I'm grateful she made this public and is using her platform to promote vaccines. Also, cuz she's my new neighbor."

Proving Navarro's point about Trump supporters being wary of the vaccine, almost all the comments on Ivanka's post were from her followers saying they would not be following suit. "Nope not putting that in my body," wrote one popular comment -- while others simply said, "No," "Pass" and "Why?"

"If you see the responses from Trump-supporting Republicans against what used to be their favorite daughter, you can see just how political it has become," Navarro said on Friday, referring to the comments on her post. She went on to shame people -- like Ivanka's father -- who got the vaccine behind closed doors after previously downplaying the pandemic.

Even Joy Behar showed some mild praise for Ivanka, adding, "She's a little late but I'll give it to her."

.@ChelseaClinton tells @TheView “it’s never too late” for former Pres. Trump to publicly show his support for COVID-19 vaccines: “I still wish they would release photographs of President Trump and Mrs. Trump being vaccinated because I think it’s the right thing to do." pic.twitter.com/3fXywbvuDs

The subject of vaccine photo-ops came up when Chelsea Clinton appeared on the show this week as well, and called for the former POTUS to share his pictures.

"I still wish that they would release photographs of President Trump and Mrs. Trump being vaccinated because I think it's the right thing to do, full stop," she said. "It's also really important given that we know white Republican men are the most vaccine-wary, the least likely to say they would be willing to get a Covid vaccine."

Saying she believes Trump is still the "popular figure for that demographic," adding it would "make a real difference" if he was "willing to be a poster child of vaccines and vaccinations."