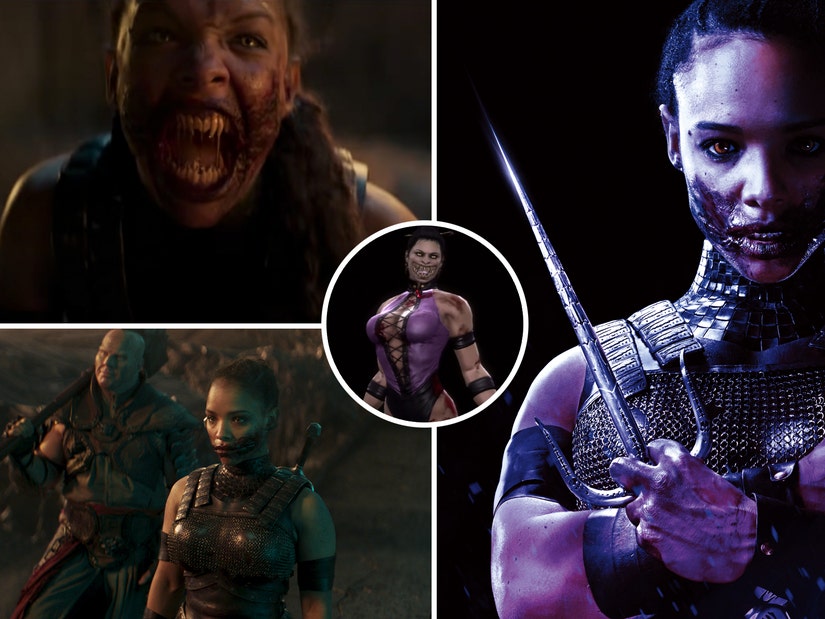 Stringer admits she voiced concerns about what her costume would look like, thanks to the "highly sexualized nature" of her character in some of the video games.

"Mortal Kombat" star Sisi Stringer had a number of questions for director Simon McQuoid once she landed the role of evil, sai-wielding Mileena in the new R-rated video game adaptation -- and, yes, the character's infamous costume was one of them.

The character was introduced in the second MK game way back in 1992, as an evil, purple-clad clone of Kitana. What began as a leotard with matching boots, gloves and mask to hide her Tarkatan teeth, devolved into barely-there lingerie (inset above), before coming back around to warrior armor in more recent games.

Speaking with TooFab, Stringer admitted she did have some concerns about the approach for the film -- but hoped and had a feeling her look would be more reminiscent of MKX and 11.

"Before Mileena was added to MK11, the most recent game, as a DLC with Rain and Rambo, she was in MKX -- which was the one before that -- and her clothes in MKX were not sexualized at all," said Stringer. "She was wearing pants and she was mostly covered up. Nothing like the lingerie in the games prior. So, I wasn't too worried because I assumed that that would be the springboard, as opposed to the literal lingerie."

"I had like a list of questions for when I flew to Adelaide for the screen test and stunt rehearsal, and I had this book of questions and I took it to [director Simon McQuoid] and I said, 'What about this? What about this?' And like the last question on my list was, 'And what about the highly sexualized nature and presentation of this character?' And he instantly was like, 'Oh, no, no, we're not doing any of that racist or sexist crap.' And I was like, 'Okay, good! Conversation ended. Period. Move on!'"

In the film, Stinger wears black leather armor, full pants, arm guards and her hair pulled back in braids. Mileena's mask is gone, instead replaced with a scarred and blood-stained maw that opens to frightening lengths mid-battle. It's a far cry from anything fans have seen in the games -- but a look that left Stringer feeling like a total badass and in just a little bit of pain.

"It's incredible. One way that I really step into character is when I'm in my costume and I look in the mirror and you feel the way it makes your body move in a particular way and then you get on set and you're in the costume, in the environment, and your fellow actors are in their costumes and their environments and that's one thing that really helps me get into the role," she explained. "But the costume is hard leather. And it's got a very small waist and I'm absolutely strapped into it, you know? It's kind of like a Victorian corset. They have to yank it while I hold onto a table at the back you know?"

"My first day, the first day I had worn the costume, I was in a coal mine, and I was walking back and forward, that big shot you see in the trailer, where I'm just walking across a mountain ridge," she continued. "That first day it was freezing. My first day, on a big set, in a movie, it was just me in this scene, nobody else and I was walking back and forth and the costume was pinching me because we hadn't worn it before and I didn't know how it would move."

She explained that, "by the end of the day," she had "these welts on the side of my body and I still have scars from it right now." That being said, "despite all the pain, and the cold and the trouble," Stringer said it was "literally the best day" of her life. "Honestly, now the scars are like a lovely little remembrance -- and after that we put some lining in it and it never cut me again!"

To tap into Mileena's more horrific side, Stringer had to get a mold made of her teeth for some "ferocious" fangs, rocked contacts and had prosthetics applied on her cheeks for when her character decides to show off the full extent of her toothy grin. The prosthetics were then covered in blood, which Stringer referred to as her "war paint."

"I think and the motivation for that -- like me as an actor thinking about my character -- the motivation for that war paint is the scars that she has all over her face," she explained. "She was created in the image of a perfect, beautiful, warrior princess, and she's an exact clone, but she has these ugly scars, and these horrendous teeth that come out. So, she's kind of like a ruined beauty and the war paint is something to threaten people, but to also sort of hide that ugliness."

"Mortal Kombat" marks Stringer's first major studio feature film role and, speaking with her, her excitement about the project is both apparent and infectious. But after her audition, her "absolutely sneak, cheeky" agent initially made it sound like she didn't get the part!

"I was like, 'How dare you. How dare you do me dirty like that,'" she exclaimed, adding that "there was a lot of screaming involved" after she found out she actually landed it. "It was a fabulous, wonderful surprise -- basically I went dancing. I went out with my friends and I got down at the club."