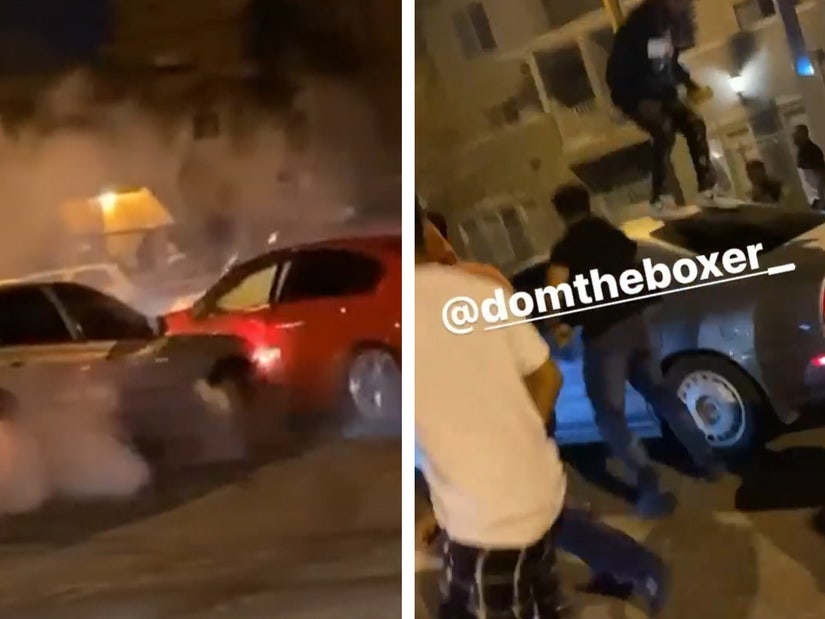 The terrifying video has one moment of karmic justice.

A disabled motorist who accidentally hit a driver pulling donuts on an LA street took the blame from an angry mob — as well as a vicious beating.

Terrifying video posted on Instagram show a crowd gathered around Broadway & 121st Street, watching a driver skid in circles around the intersection, when a grey Honda driving past slams on its brakes, but is unable to stop, T-boning the red Chevy SS.

But the crash is just the start of it for the Honda driver; the incensed mob quickly turn on him, crowding around his car and smashing it up. 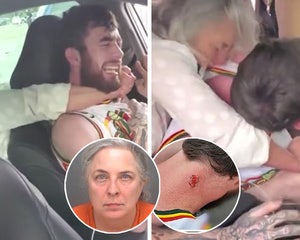 As the badly damaged Honda tries to crawl away, dozens swarm on it, jumping on the roof and kicking the windows in; one man jogs beside the car and repeatedly attempts to put his fist through the drivers-side window.

Standing on the trunk, another man finally smashes through the back window and climbs into the back of the car, intent on opening the doors to let the rabble in at the terrified driver.

But the maneuver comes with a bit of karmic justice; as he opens the rear locked door from the inside and slips out, one of the gang appears to think he is the driver escaping — and knocks him out cold with a punch to the head.

Leaving his fellow mob member knocked completely out of his shoes and unconscious, the lead assailant returns his concentration to the driver's door, unconcerned. The man who was punched regains semi-consciousness and stumbles to his feet, as members of the crowd try to steady him.

But the assault on the Honda continues nevertheless, as they finally get the front door open; the petrified driver can be heard repeatedly pleading "I'm sorry bro!"

As he tries to protect himself, his leg cast can clearly be seen, but it doesn't seem to bother the attacker, who tries to drag him out onto the street, repeatedly punching him in the face.

Some of the mob appear to have a change of heart when one reaches in through the smashed passenger-side window and retrieves a walking stick, which he sheepishly places on the roof of the destroyed car before walking away.

Again, the lead assailant doesn't appear to have much mercy, tossing the cane into the car and landing one final blow, leaving the whimpering driver with blood streaming from his ear.

The Instagram user who shared the witness video hit out at those reposting the footage but not helping (even though the witness themself didn't seem to do much to help at the time).

He asked for help tracking down the victim so he could create a GoFundMe and "get him a car on the low."

LAPD told TooFab they had no reports of the incident from that location.