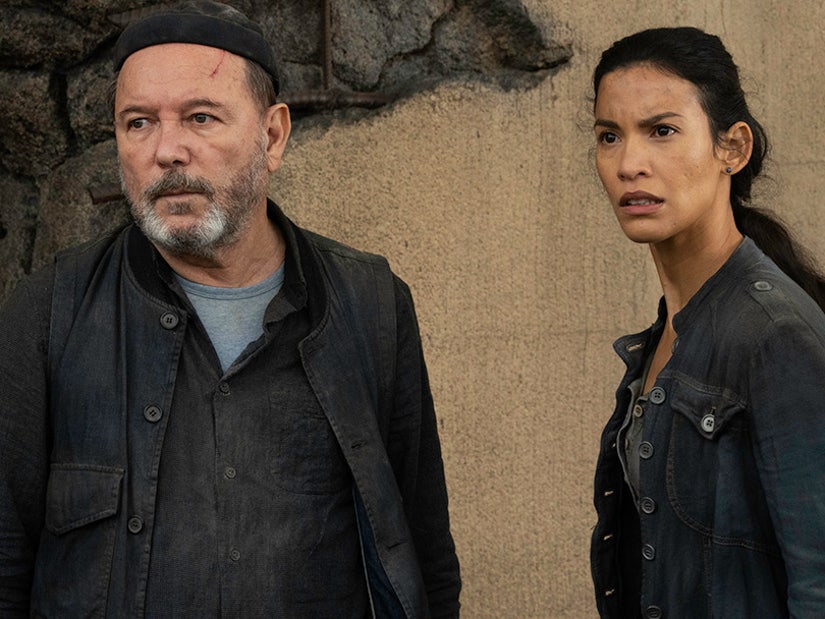 One character is left questioning everything as new menaces loom and no one quite knows where the danger lies -- or who might be a threat.

In the build-up to the "big bad" of this second half of "Fear the Walking Dead's" sixth season, we got a good look at just how dysfunctional our surviving heroes are after Virginia ran roughshod over them for the better part of a season or more.

After capturing them and dividing them, she had far more detrimental impact on them than anyone could have guessed. As this hour opened, it turned out there are no less than four separate factions among our survivors, when they used to be united ... and that certainly was Morgan's vision. 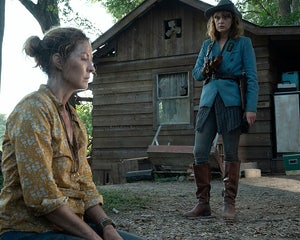 Now we have Morgan's dam community as only one group of survivors. Victor and the remaining citizens of Lawton (including Virginia's Rangers) have opted to stay there. Sherry and her masked vigilantes have kept the MRAP and their own sanctuary.

And finally, June left after shooting Virginia last week point-blank in the head, knowing she had violated Morgan's covenant. In the interim, it looks as if Sarah and her brother Wendell (who we haven't seen in so long we weren't sure if he was still alive) have joined her, if not others as well.

The Tank Town vandals, spray-painting their "the end is the beginning" nonsense all over the walls and structures in the region certainly appear to be a force even more dangerous than even Virginia was. With them still sending their messages, and more than likely aware of these four disparate groups, now would be the time to unite.

At least in the way the communities of the parent series did, with a non-aggression pact and trade established for goods and intel. A united front stands a much better chance of holding up against a common enemy. But a united front requires trust.

Is that perhaps why this week's episode seemed to be about eroding and ultimately destroying that trust for good, presumable at the hands of one man. By the end of the hour, it looked as if Daniel Salazar -- who spent the first half of the season faking memory loss amid traumatic brain injury -- may actually be suffering a mental break.

The events of the episode see him systematically destroying any glimmer of trust between the communities with one action after the other. A massive explosion during the opening of their meeting set things off.

From there, Daniel discovered the guns had been stolen (like Alexandria, all guns were locked up for everyone's safety). He then set a few walkers free into the community to try and flush out the guns. What he flushed out was that Victor had one. But did he steal them all? Daniel almost shot him in the face after locking him up, he was so convinced.

It all came to a head for Daniels' mental state much later in the hour when Grace and Charlie countered Daniel's insistence he'd sent them to a fishing shack for their protection. They say he sent them to "the caverns," a place heretofore unexplored by our heroes, and thus very dangerous.

The weapons were then found covered and in a wagon inside his shed. The only conclusion was that Daniel himself had done it, making him fear he was suffering another mental break, as he did a few seasons back when his daughter died. But is that what's happening here? 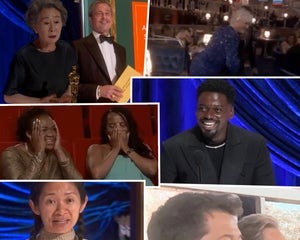 We still don't know who caused the original explosion, or how Daniel could have moved all those weapons before the meeting without being seen. Is it possible that his initial instinct was correct, and he's supposed to doubt his mind. Was the hope that the former intelligence officer would leave the dam community, to weaken its intelligence?

Should we be suspicious that Victor, after everything, rather quickly convinced Daniel to return to Lawton with him after Daniel was caught trying to leave the dam compound for their safety from him. He was, conveniently, leaving at the same time as the Lawton contingency, but that might just be a convenience of writing.

One thing that came up in the meeting just before the explosion was the idea that someone among them is possibly working for the other side (aka the new "big bad"). Again, they were all separated for a very long time, so there has been ample opportunity for anyone to turn on the community.

But if we then look for someone to have done that here, we're almost left with Grace and/or Charlie. They could have lied about what he told them regarding where to flee to, and even doctored the map to show a circle around the caverns (he insisted he'd marked the cabin).

But then why would they both do that, and especially with Grace as deeply pregnant as she currently is. For that, we don't have an answer, and thus it's perhaps possible that things are just as they seemed and Daniel is simply suffering a mental lapse. But these kinds of shows have taught us to never quite trust the obvious answer.

On top of that, the prevailing theory is that the new "big bad" might be none other than that serial killer John Dorie talked about his father lying to put behind bars. The timeframe of that story could certainly coincide with the preview's glimpse at "Smallville" star John Glover, looking wild and hairy and old enough to have been put away by John's father before the world fell to shit.

As John put it, the serial killer brainwashed a bunch of followers into believing he was the second coming as he spouted about death and new beginnings. Certainly this whole world now seems to fit that description, so if he survived, he could easily be building new followers. Who might have become an acolyte during the time we didn't see them? Who was absent long enough?

With the anthology style of the first half of the season, we were checked out and away from virtually everyone for such long spans of time (again, we thought Wendell might have died) that almost anyone could have had the time to have somehow run into him, or been captured by him and converted.

At the same time, we must still be very wary and concerned about Dakota, who's proven herself a sociopath at best with how casually she killed John. Her message that she recalled Virginia saying they had gone "underground" could be another reference to those caverns (it would make sense) or it could be part of an elaborate trap.

We know Dakota used to sneak out all the time before Virginia shut down her access point, so maybe she's an acolyte. Maybe she moved the weapons, though that doesn't explain the disconnect with where Daniel sent Grace and Charlie -- unless the mental lapse is real and Dakota seized on the opportunity to strike and make it even worse.

Next week, we meet the man we suspect is our "big bad" and see what horrors the rest of the season has in store. At the same time we must recall, where there is one mole, there may be more. Can we trust anyone? Was Daniel the only one we could and now he's been handled?

"Fear the Walking Dead" continues on Sundays at 8 p.m. ET on AMC.