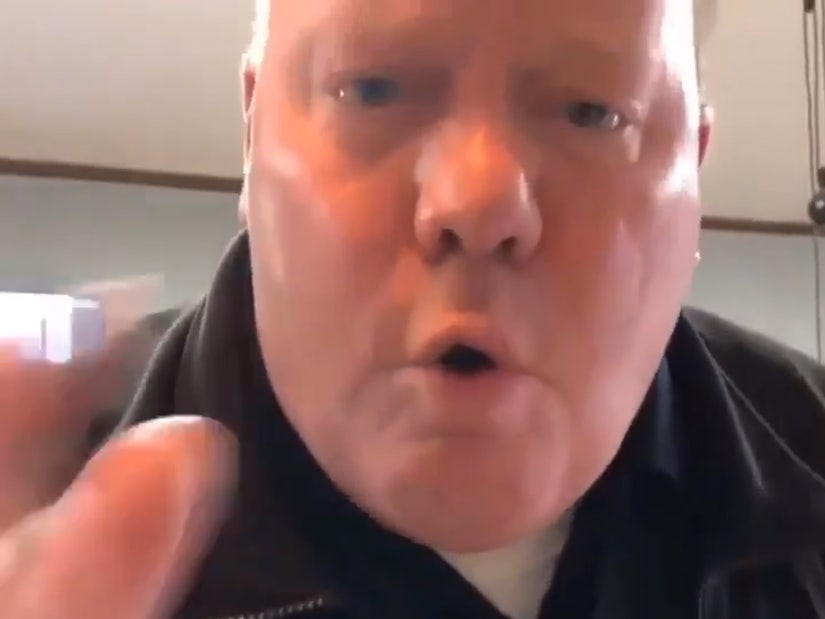 "Oh yeah it's racial profilin'! 'Cause I just don't like Black people!" the officer mocked.

An on-duty Pennsylvania police officer who was filmed "racially profiling" a Black diner has been removed from duty.

Vandergrift PD confirmed that 20-year vet, Officer William Moore, had been removed from the work schedule — with pay — while the incident was being investigated.

Uncomfortable footage of the encounter was posted on Twitter over the weekend, with virtually every commentator noting how the uniformed officer appeared to be inebriated.

It was recorded by 20-year-old Marcus Townsend, who was dining alone at G&G Restaurant when he was approached by Moore, who refused to tell him why he was questioning him.

"What did I do sir?" Townsend can be heard calmly and repeatedly asking, to no avail. Instead, Moore radios for back-up.

"Please bring your superior," Townsend asks him, and this time gets a reply: "I am superior."

"I am superior officer," he announces loudly. "My badge number is 4. You understand that?"

This is part 2 of drunk Officer William Moore with the Vandergrift Police in PA racially profiling an innocent Black man pic.twitter.com/wzNQONPNGp

Moore will only explain "I got a call here for you" and demands Townsend leave the restaurant and step outside. "It's very fair, and it's very right," he slurs, before Townsend finally relents and hands over his ID, without ever being told what he is supposedly suspected of doing.

"Racial profiling," Townsend mutters, half to himself, only to be trumpeted by Moore across the restaurant. "Oh yeah it's racial profilin'" the officer bellows, asking dispatch on the radio to run the suspect apparent's license.

"Run that please," he barks over the radio, "because this guy says that I'm 'racial profiling' him."

"Oh yeah! 'Cause I just don't like Black people," he loudly mocks. "Yeah I don't Black people, It's like that out here... everybody who knows me knows that I don't care whether you're white, brown... or tan. I'm tired of your attitude."

Outside, a far calmer and more respectful officer arrives, and helps diffuse the situation somewhat.

Moore once again radios the station to ask if Townsend has any warrants — and his face visibly drops when he's told "Negative."

After a pained pause he radios back "Okay... stand everything down. Please," but then remembers something else he can dig into: "Also a criminal history."

Last week, Mayor Barb Turiak confirmed to TribLive that Moore had been removed from duty on paid leave while the incident was being internally investigated.

Once complete, council members will decide if Moore should keep his job, she said.

Vandergrift Police Chief Joe Caporali told the publication Moore had responded to a 911 call just before 8 AM on Saturday reporting that a Black male was smoking marijuana outside G&G Restaurant on Columbia Avenue; he did not say who placed the 911 call.

He said the allegations against Moore "are being taken seriously by borough officials."

Townsend denied smoking marijuana. He was not arrested or charged with anything.

According to the publication, Moore was previously placed on paid leave in 2017, when police said he assaulted and threatened a 14-year-old boy.

Per court papers the incident, which was also caught on video, shows Moore grabbing the boy by his arm and placing his hand over the boy's mouth; a bystander had to pull Moore's hand from the boy's face.

The papers say Moore assaulted the boy again inside his home, placing his forearm against his throat and again covering the boy's mouth with his hand.

It notes Moore appeared drunk at the time of the incident, and that he threatened to have the boy committed to a mental institution.

Moore pleaded guilty to a summary count of harassment at the time, and paid a fine.