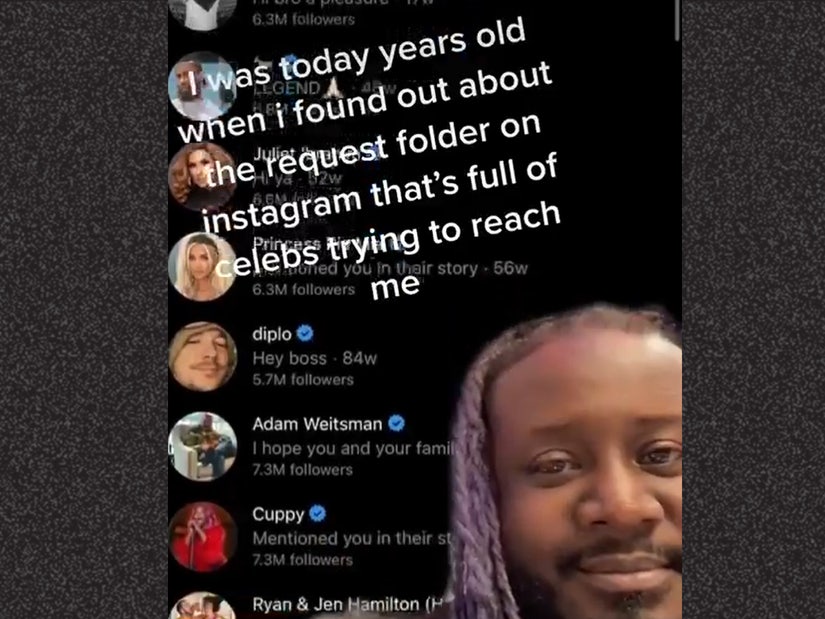 "I was today years old when I found out about the request folder on Instagram that's full of celebs trying to reach me."

T-Pain may be all over social media, but he still doesn't really know how to use it.

On Wednesday night, the rapper shared a video to his Twitter page showing that he only just now realized his Instagram account also comes with a request folder, full of celebrities hoping to connect with him.

"I swear!! I'm just now seeing all these messages and mentions TODAY!!!!" he shared in the video, in which he also gave fans a peek of who's been trying to contact him. "How do I super apologize? Press conference? Town hall meeting? I'm dumb"

"I was today years old when I found out about the request folder on Instagram that's full of celebs trying to reach me," he added, before scrolling down the list of stars who messaged him -- including Diplo, Pia Mia and Fergie. "Dude, is that Fergie?! Smh" he captioned the clip.

While most of the list were people who merely mentioned T-Pain in one of their Stories, someone on Viola Davis' team also apparently tried to reach out.

"I've been accidentally straight up ignoring all these people for like 2 years," he continued. "I thought Dms are supposed to just show up in the normal folder and you don't have to go digging for all these. I apologize to everybody on this list and the hundreds of others I couldn't fit in this video."

This video isn't the only reason the rapper has gone viral this week -- he also shared a video to TikTok on Wednesday showing him going head-to-head against a group of racists while playing Call of Duty.

In the clip, his opponents are heard saying "F--- Black Lives Matter" and dropping the n-word repeatedly, before T-Pain hunts their avatars down one by one, killing them all. "I want every single f---ing one of them," he exclaimed while playing.

"Shutting down some racists in Call of Duty," he captioned the video.