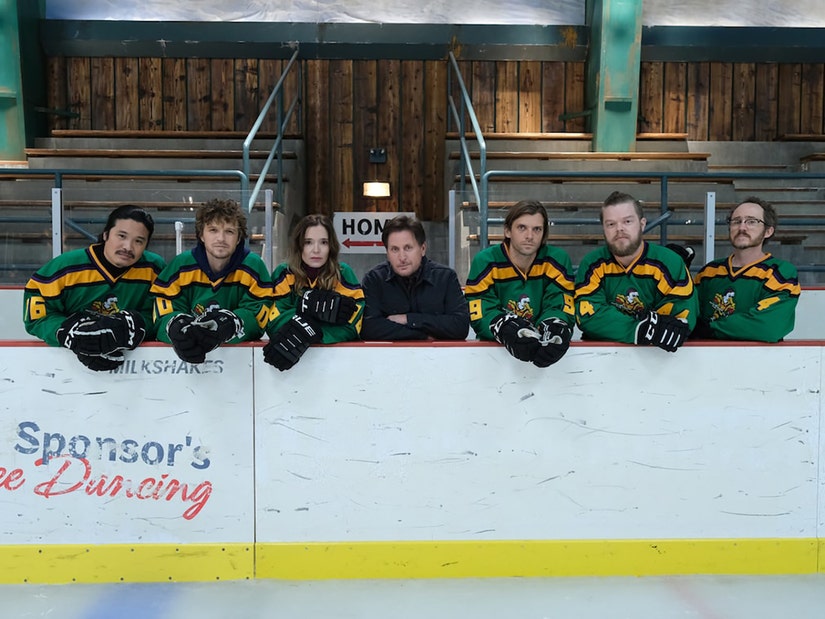 See who had a body double for the Disney+ reunion episode and what it was like throwing back a beer with Emilio Estevez.

The original stars of the "Mighty Ducks" movies made their triumphant return to the ice on this week's new episode of "Mighty Ducks: Game Changers" on Disney+ -- a treat for both longtime fans of the series and the stars themselves.

Back for the special reunion episode were Marguerite Moreau (Connie), Garette Henson (Guy), Elden Henson (Fulton), Matt Doherty (Averman), Vincent Larusso (Adam Banks) and Justin Wong (Ken Wu), who all give Emilio Estevez's Coach Gordon Bombay a much needed pep talk to get his head back in the game.

Viewers learned that Connie and Guy tied the knot and have three kids of their own, one who was named after Bombay. She's a Minnesota state senator, he's a stay at home dad. Averman, meanwhile, is a limo driver -- a nod to Bombay's arrival in the OG movie -- while Fulton is a construction worker, once again breaking Coach's window on the job. Adam Banks, meanwhile, is working as a public defender. We also learned Bombay bailed on attending Guy and Connie's wedding and Charlie (Joshua Jackson's character) didn't show up because he didn't think Coach had been showing up for them lately at all.

All in their 40s now, the cast told TooFab they all jumped at the chance to return, spilled on what their training was like before hitting the ice again all these years later, revealed what it was like to be a child star back in the '90s and reflected on where their characters are today. 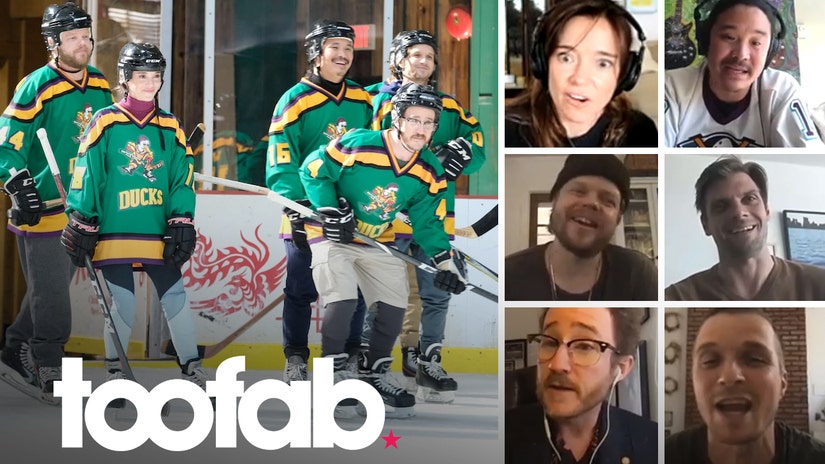 Did anyone have any hesitations about returning, were you nervous about anything or did you all jump at the chance to be back on the Ducks?

Elden: I jumped. I jumped. I felt super lucky and humbled that they asked me to come back and I was happy to do it. I mean, these movies changed my life, I'm forever grateful to them. I'll always come back and do whatever they ask and it was a real pleasure to meet the new kids. I don't know, I feel like you guys felt the same right? Like you guys were stoked?

Matt: I mean, to be able to serve the team that changed my life, yeah. It's kind of like when you see athletes -- I'm a huge White Sox fan and you get to watch the way the old players come into Spring training like they're a part of the team -- a few minutes does not encapsulate the amount of perspective and gratitude it is to, on an individual basis, to be able to come back and sit with the kids and have lunch with them, and talk as an adult with the people who changed your life. I mean, c'mon.

Marguerite: I was just excited to have a beer with these guys and be like, 'Dude, don't you think it's funny ...I bet behind the camera they were laughing their asses off at us, as little kids just falling over all the time and cracking up when we were taking something so seriously.' It was a real joy to experience these movies as an adult with each other at some of the recent screenings we've gotten to go to. I was so eager to see them now, and see who they've become as people but then go, 'Oh, you guys are exactly the same. This is awesome. I know you guys.'

I didn't know what the script was gonna be. I didn’t know if we were just going to show up in one scene and have one line. It was all a mystery. It was just like, 'Sign us up. What are we gonna do? I hope we're gonna wear skates. I hope this is gonna be something like what we kind of did, but whatever it is, it'll be great.' And then I feel like what we got with this episode was icing on the cake. I mean, [film franchise creator] Steve Brill got to direct it. It was so fun."

That was great, the scene of you all at the bar, grown up and drinking ...

Marguerite: I know right? Too bad it was quarantine and we couldn't really go out for a drink together at a bar!

Justin: Absolutely no hesitation -- like if they ask again I'd be right there.

Vincent: I had no hesitation. It was exciting. It was one of those things where -- when the call first came and they sort of liked checked schedules, I hung up and I was like, 'That's not gonna happen.' And sure enough, how ever many weeks later it was happening.

Garette: I was really excited to be a part of it -- also because we were in the middle of a pandemic. So, just this idea of getting out of my house and being given this opportunity to get back on set again, and be in a production and be in front of a camera just seemed like the most exciting thing I could've possibly thought of, and it was. It really delivered. It really was just so much fun coming out to Vancouver. 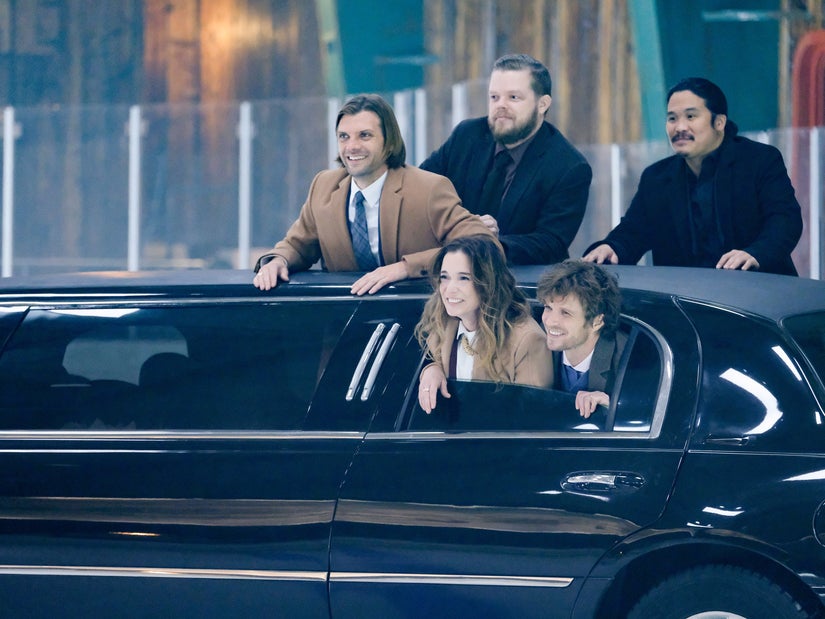 Did you guys have to train on the ice again, did the body doubles come out? Justin looked really solid in his scene, but was that the case for everyone?

Garette: Luckily they didn't ask too much of us as far as the skating goes -- so what they needed from us we were able to deliver, but it was a lot of fun getting back on the ice and skating again.

Vincent: Yeah it was a riot. And I loved that sentence Garrett, I gotta remember that one. 'What they needed from us, we were able to deliver it,' because that's exactly what it was. It was perfect.”

Justin:  The figure skating scene in the episode is actually Patrick Chan. He's a Canadian gold medalist for Canada and so he did that scene. Yeah, it was fun, like these guys said, just like getting right back on their bikes. Then, whenever we were in between takes, and all the kids were out there, we were skating around, shooting pucks around with them too.

Looking back at the first films, they were huge at the time. Could you feel it and what was it like being a child star in the '90s?

Marguerite: You remember what you used to say Elden? 'A star is a ball of gas.' I always remembered that because to us we didn't feel like stars, we were just kids spending all day in hockey breezers, sweating and knocking into each other, and playing and then sometimes we'd get a little dressed up and not be able to party at those big fancy parties. We were just busy on a movie set kind of just being a group of kids in a small high school. It's like we kind of went through puberty together. Then we took a break, and now we can have a text chain together.

Elden: I don't know that I really had a concept of it back then. When you're that age, what's on my mind is getting a girlfriend, or like you know, a few years later, getting my drivers license. I played baseball growing up, so a lot of my life was consumed by that. I don't think until I got older that I really had perspective on it all and really realized how lucky I was.

Matt: Do you remember Elden when you and I had a coffee, we ran into each other at an audition or something and we went to a Starbucks and we were chatting about the idea of what an impact this was on our lives, and how you don't know it at the time. But once you start thinking about the seminal experiences that we got the privilege to share, like meeting Wayne Gretzky, that alone, playing hockey in a professional stadium before the team even played there ...

Marguerite: Filled with 17,000 people yelling your name when they announce it over the live speaker.

Matt: It's nutso how much our lives have been changed by this experience. And of course you don't get it because how could you as a kid, right? So, being able to come back and do this experience and then go ...

Marguerite: Celebrate it with gratitude and appreciation of all that it was for people because it kind of was for us too. So, we get to share it too.

Garette: Back then I don't I really grasped how big the movies were. For me I was fortunate enough to work quite a bit as a child. And so when I got the role I was like, 'Cool, just another movie,' and kind of kept it moving. It was a lot of fun being on set. It was a lot of fun making the movie because there was so many kids, and it was really just this big slumber party, but it wasn't really until many years later that I grasped how important it was to an entire generation. And to be in a movie that has stood the test of time, is a real honor."

Justin: For me, it wasn't until that Anaheim Ducks silver anniversary that I realized how much the movies have affected people and how big the fans are to the movies. For me, just being out of it for so long, I was just like, 'Oh, that's just something I did when I was 13 and 14, 12-14.' But now it's something I'm very proud of. 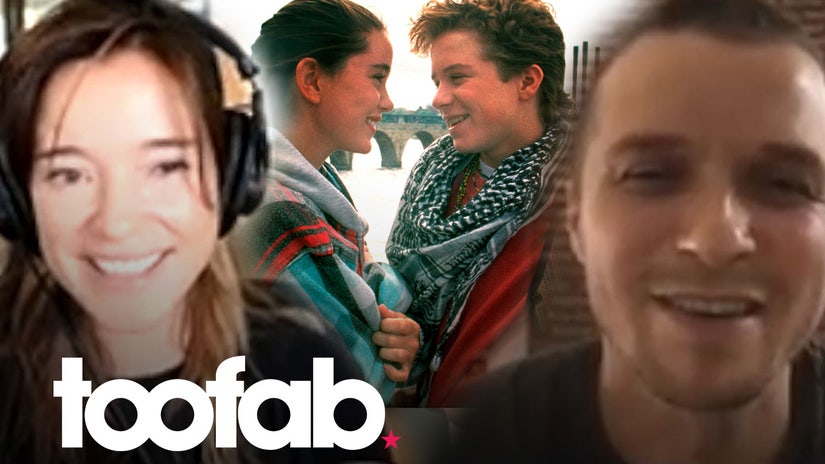 When you started to see what your characters would be up to now, what were your reactions. Marguerite, we were very happy to see Connie and Guy made it work.

Marguerite: Well, I tried to marry every boyfriend I ever had. So, for me, it's a very true storyline, and one I didn’t really have to lean into much. I was twitterpated.

Garette: Guy's pursuit of Connie was his through line. That was his reason for being, was to try to gain her affection. So, I'm really happy that he ultimately succeeded in that and I love how successful and driven she is as an adult, and how supportive he is of those dreams of hers.

Matt: I love that Connie also is like the Senator, and Guy is the stay-at-home dad. It's so true to what "Mighty Ducks" always has been.

Elden: I had no idea what to expect and I think I was excited as anyone else to first read the script. But I think ultimately it was really, it was about reconnecting with these guys, and reconnecting with Emilio. And just like being able to reconnect with Steve -- although I see Steve every now and again -- to work with him as a director now, I feel super lucky and I would've done anything. They could've made Fulton whatever, and I would've done it.

Marguerite: I love him though and how he is as a character. I was like, 'Oh my god, that's perfect!' And yours too Matt. I just really think it feels true to the story and I just feel very lucky that they could see that for you guys."